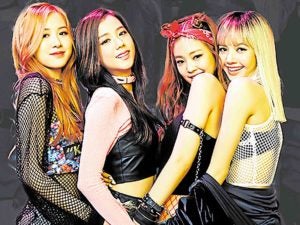 Blackpink is gearing up for its four-year milestone next month, having released its debut album “Square One,” featuring the No. 1 hit “Whistle,” on Aug. 8, 2016.

Last Friday, Ji-soo, Jennie, Rosé and Lisa gave their fans, known as Blinks, great reason to cheer long before August and the September release of the girl group’s upcoming album.

Among music acts, Blackpink has the largest number of subscribers on YouTube (39.8 million), surpassing even the following of One Direction (31.7 million). But the ladies are just as popular on other streaming platforms, like Spotify (where they have 20.8 million monthly listeners).

Blinks certainly have their work cut out for them—and, upon the invitation of Globe and Globe Kmmunity PH, Inquirer Entertainment was there last Friday to witness and share virtual space with them to cheer the girls on, never mind if a considerable chunk of their giggly chat was in Korean.

For their V Live event, Ji-soo, Jennie, Rosé and Lisa engaged fans with friendly banter, some of it in English, about how appreciative they are of their fans’ support. But the highlight of the event was the making of “How You Like That’s” color-draped, energy-driven music video, where behind-the-scenes footage of their choreography rehearsals was shown.

The song itself is no slouch. It was released through YG Entertainment and Interscope Records and written by Korean-American rapper Teddy Park and Danny Chung in Korean, with some phrases in English.

When the track isn’t showing off Lisa’s kick-ass rapping skills, it casts each of the girls in an optimistic light as they sing about bouncing back from a bad relationship and breakup.

For instance, in a stanza sung by Jenny and Jisoo, following Lisa’s rap about karma, the dance song winkingly warns of comeuppance: In such a dark place, shine like the stars/With a smile on my face, I’ll kiss you goodbye/Laugh at me while you still can/Because it’s now your turn…

Later, the four girls feistily declare: You should have ended me while you still had your chance. Are you listening, guys?

Speaking of the event, we’d like to thank the movers and shakers of Globe, who invited us to the streaming party as part of its activities for the #KmmunityHwaiting Month in June.

Globe Kmmunity PH has been pulling out all the stops by releasing exclusive giveaways, partnerships, promos and events to give members their fill of K-culture. Its activities include K-drama and K-pop virtual-watch get-togethers, K-culture trivia events, K-pop listening parties and an exclusive virtual Hangout with GOT7’s Park Jin-young.

YG also announced that the Blackpink affair is part of the group’s three-phase comeback, with more songs coming up before the release of its full-length album in September.

We were told that #KmmunityHwaiting Month was just the beginning of Globe Kmmunity PH’s initiatives in bringing the best of K-culture closer to Filipino fans and Globe subscribers. So, don’t miss out on any K-pop updates. Get first dibs on exclusive invites by joining Globe and its official Kmmunity PH group on Facebook.