Hirokazu Kore-eda and Catherine Deneuve look for ‘The Truth’ 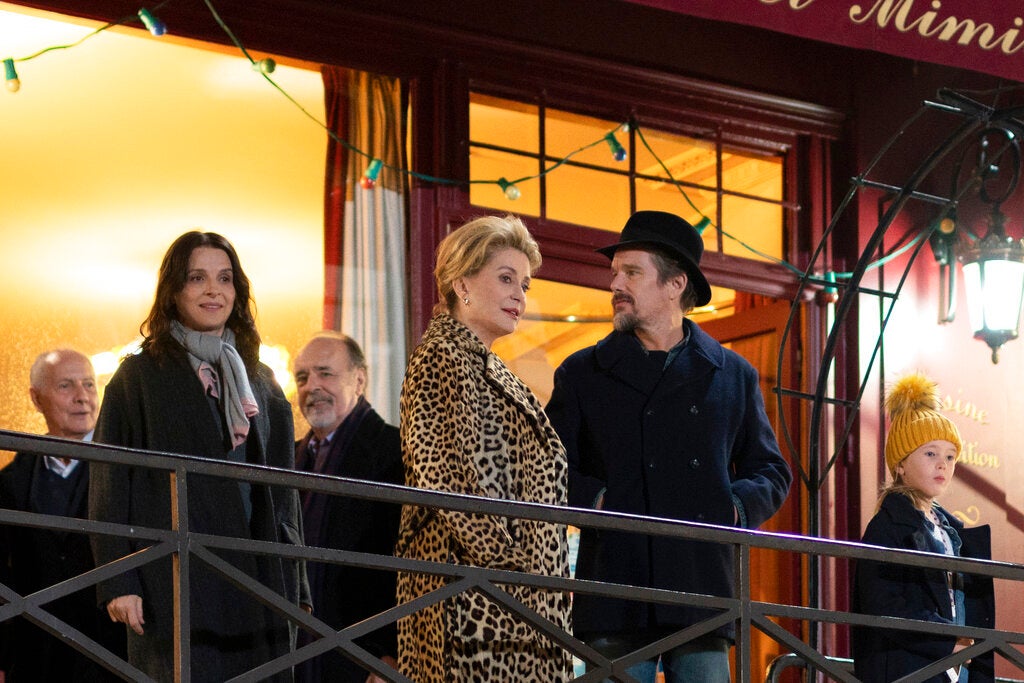 Foreground from left, Juliette Binoche, Catherine Deneuve, Ethan Hawke and Clémentine Grenier in a scene from “The Truth.” (IFC Films via AP)

VENICE, Italy — Catherine Deneuve plays an icon of French cinema in “The Truth.” She even chose her own middle name, Fabienne, for her character who says things like, “I’d rather have been a bad friend and a bad mother and a great actress.”

But don’t go looking for some essential truths, or gossip, about Deneuve in lines like that, or in Fabienne’s eyeroll at the mention of Brigitte Bardot. The 76-year-old insists that similarities end with the name.

“To me she’s a stranger,” Deneuve said, cigarette in hand, after “The Truth’s” debut at the Venice Film Festival. “It’s really so far away from me.”

She has a great relationship with her children and her co-stars and can’t think of any friendly rivalry with peers from her past. But it doesn’t make “The Truth,” available on demand Friday, any less of a fun send-up of an imperious, larger-than-life star who might not remember things the same way her grown daughter Lumir does.

The tragicomic portrait of a star in her final act who is juggling a film, the release of her memoirs and a visit from her daughter, played by Juliette Binoche, comes by way of “Shoplifters” director Hirokazu Kore-eda in his first film outside of his native Japan.

It was a truly international affair, with a script primarily in French and English, a director who spoke neither and actors who didn’t speak Japanese. Ethan Hawke, who plays Lumir’s actor husband, didn’t speak French either. Suffice it to say, the Paris shoot was little daunting for everyone considering the film is a dialogue-heavy character study about the nature of truth and memory and a delicate mother-daughter relationship with moments of comedy and drama.

But Hawke found a way to comfort his director.

And all the actors adjusted in their own way. Deneuve said after she’d finish a take, she would look at her director before anything else.

“It’s important. You see little signs,” she said. “After that we talk. But I always try to read something on his face first.”

Deneuve relished the role and getting the chance to work with Binoche. Somehow the two had never been in a film together.

Kore-eda counted himself as a fan of Deneuve’s and peppered her with questions about her films with French New Wave legends like François Truffaut and Jacques Demy.

“Having my film in her filmography — which is as prestigious as the history of French cinema itself — is for me a source of both pride and anxiety,” he said.

On set, he found her to be a free spirit with little vanity but always a cigarette around.

“She’s like a person that is also like a child but extremely charming,” he said. “She’s not one who learns all her lines beforehand. She gets the gist. She gets on set and she adjusts acting together with the other actors who are moving around. I thought that for this movie that would fit the situation.”

This is not to imply that she doesn’t take her work seriously. She does. In fact, partway through the movie she came to him and asked if she could see anything edited, especially scenes that she wasn’t in herself. Deneuve wanted to grasp, “the whole of the movie.”

“I gave her a DVD with about 1/3 of the movie on it and she was really happy about it,” Kore-eda said. “She said, ‘Thanks to this, I got to understand your humor, your rhythm.’”

Deneuve loves to work and despite her revered status will often take a chance on an unknown if the script is compelling. She’d even consider American television, but she doesn’t get many offers from across the Atlantic. The few that do come her way, she said, are “not very interesting.” Retirement is not something she thinks of. The cinema still excites her too much.

“I suppose the cinema will retire me before I retire,” she said. “You retire on films when you don’t have any parts to be offered.”

Kore-eda did have a little amendment to Deneuve’s claim that Fabienne isn’t like her at all, however. Before filming, he asked his star if there was any young actress in France who had “received her DNA.”

Kore-eda was so impressed by her answer and her conviction, he decided Fabienne had to say the same thing. The truth, sometimes, is relative.