Actor on ‘coincidence’ of his film starring sons of Mel Gibson, Clint Eastwood and Mick Jagger

LOS ANGELES—Imagine the sons of Mel Gibson, Clint Eastwood, Mick Jagger and the grandson of great filmmaker Richard Attenborough all in one movie. Was this casting by coincidence?

Yes, Scott Eastwood, Milo Gibson, James Jagger and Will Attenborough are in director Rod Lurie’s war drama, “The Outpost.” “You’ve got to wonder if Rod is telling the truth when he says he didn’t realize that yes, he hired a bunch of sons of great actors,” says a smiling Caleb Landry Jones, who costars in the film adapted from the New York Times bestselling nonfiction book, “The Outpost: An Untold Story of American Valor” by CNN’s Jake Tapper.

“It was odd and yet at the same time, very quickly, it wasn’t odd at all,” added Caleb about working with the sons of icons in the dramatization of how a tiny unit of American soldiers, by themselves at a remote outpost in Afghanistan, fought against an overwhelming force of attacking Taliban fighters.

“It was odder finding out that all these guys were going to be in the same movie,” said Caleb, whose memorable performances include the Oscar and Golden Globe winner “Three Billboards Outside Ebbing, Missouri” and “Get Out.” “But once I met everybody, you forget those things. At the same time, sometimes you’d be, holy sh*t, that’s Mel Gibson’s son or something like that. It is strange and really nifty.

“Those fathers and grandfathers—I really like their work. When Milo Gibson is on-screen, he brings something that is desperately needed to this aspect of the film.” 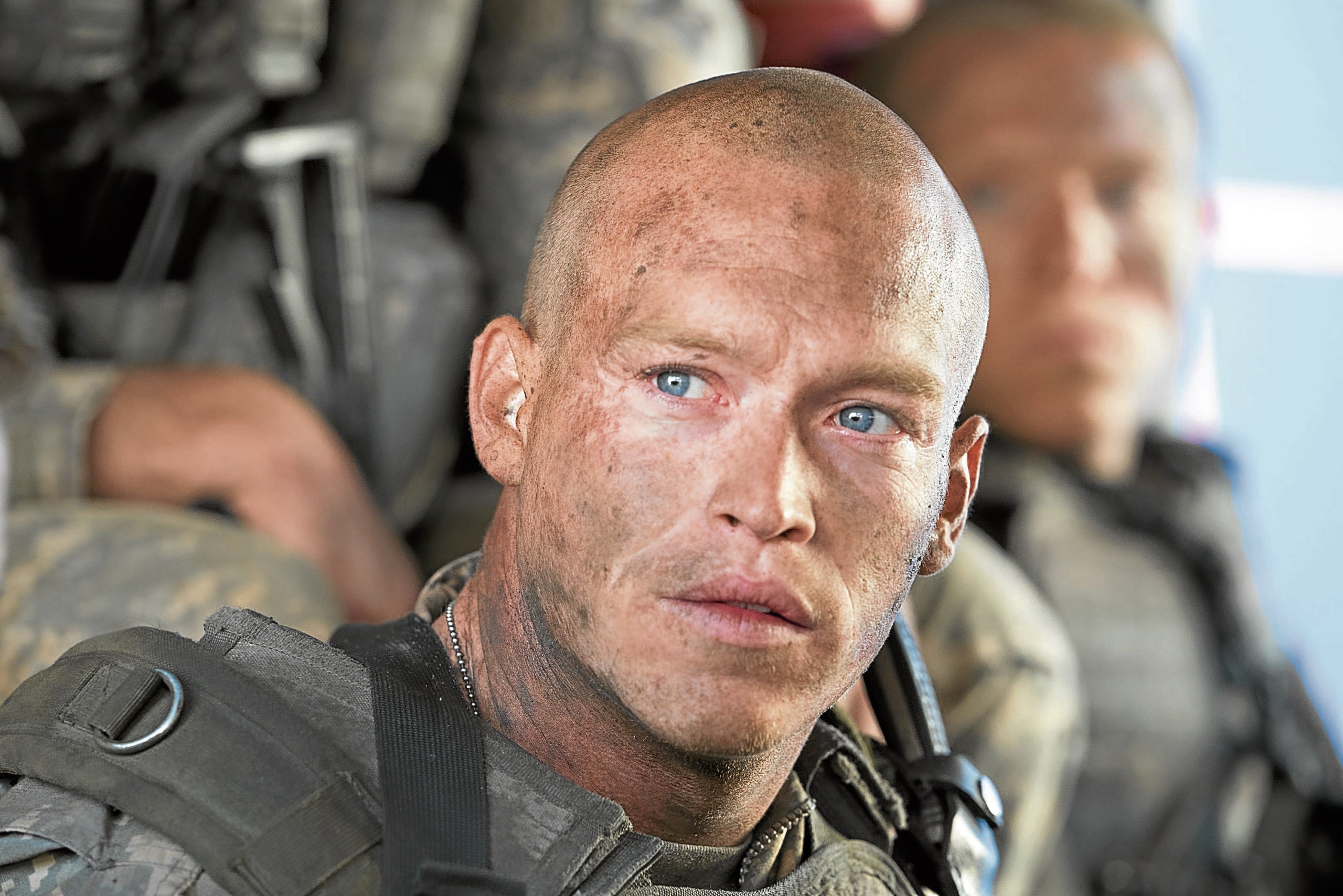 Still grinning just thinking about the coincidence of casting progenies of legends in the military thriller, Caleb stressed, “There’s a part of me that I can’t forget who their fathers are. But at the same time, you’re watching them be who they are and not necessarily like their fathers.”

Caleb, one of the finest young actors today, is himself the grandson of a musician who played with jazz greats (I was not able to get his grandfather’s name). “As much as I like acting, I didn’t know if I’d be able to do it,” said the actor who played drums in his high school band and wrote and recorded music at age 16.

“My grandpa was a jazz drummer and subbed for Buddy Rich,” Caleb shared. “Knowing that he was as good as he was, I didn’t dare touch the drums and jazz. But I felt like OK, I can put my name on rock and roll. So I had to find my own avenue about it. But it was extremely difficult in many ways. It’s very difficult what they (sons of actors) are doing, becoming their own voice in the shadow of such big voices themselves.”

Music talent runs deep in the family—his grandparents both played for the Dallas Symphony Orchestra, and there’s a long list of fiddle players in the clan.

Sporting long hair—quite a contrast from his shaved head as a sergeant in “The Outpost”—Caleb smoked a cigarette as we chatted in this video call. He and his girlfriend, artist Katya Zvereva, are staying on the farm of his parents (Patrick and Cindy Jones) in Collin County, Texas, during the pandemic period. He said in his native Texan accent, “It’s about 45 minutes outside of Dallas. I’m around sheep. There’s a donkey, peacocks, ducks and stuff.”

In “The Outpost,” he and Scott play Specialist Ty Carter (who also appears in the movie) and Staff Sergeant Clint Romesha, respectively, who were both awarded the Medal of Honor in real life. They were honored for their actions during the Battle of Kamdesh, the bloodiest American engagement of the Afghan War in 2009.

The Screen Media military thriller, which opens on July 3 in US theaters and streams via on-demand services, also stars Orlando Bloom as First Lieutenant Benjamin Keating. 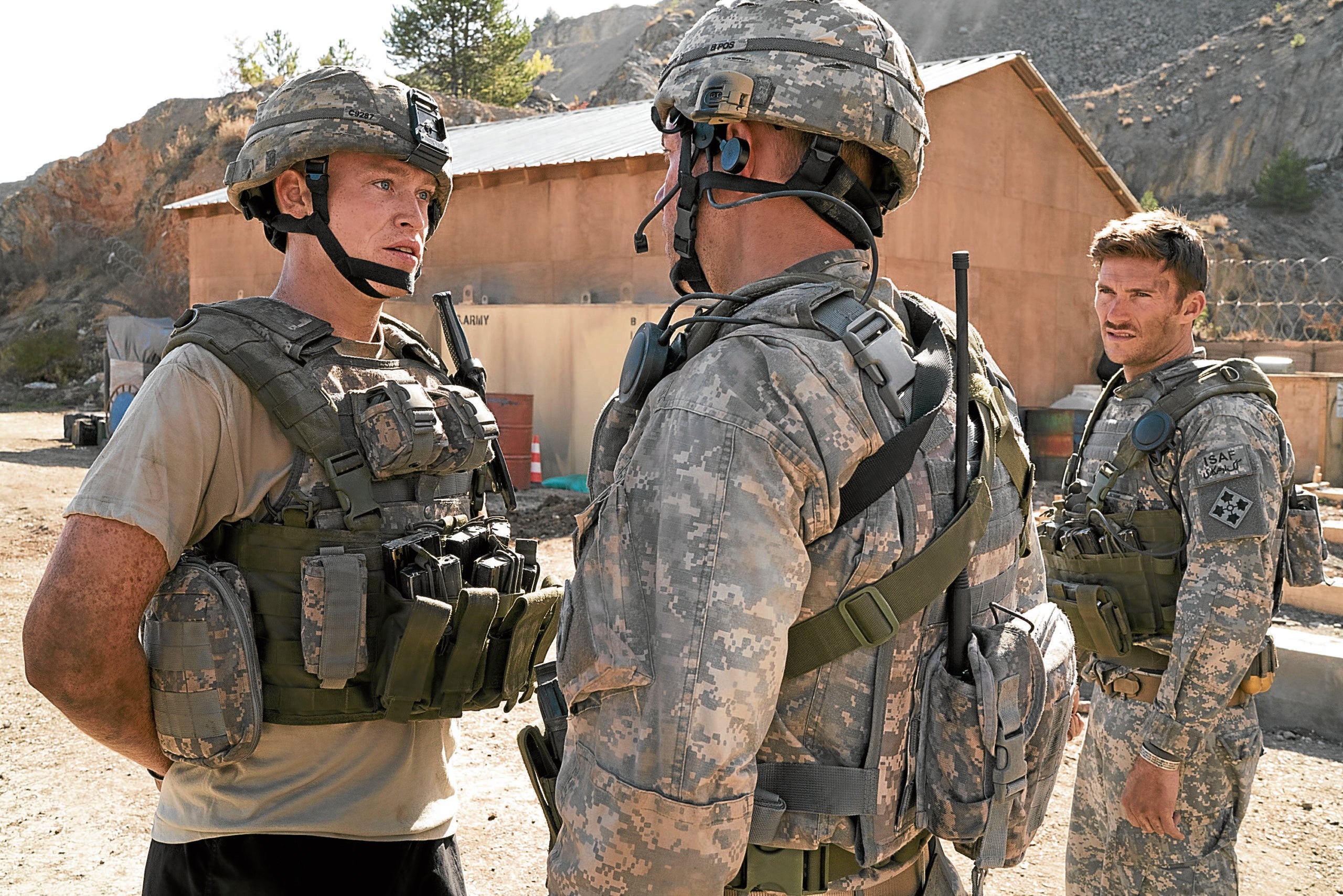 Scott Eastwood (right) is one of the sons of legends costarring with Jones (left) in the war drama “The Outpost.” —SCREEN MEDIA

To prepare for the role, Caleb turned to his brother, John. “He is a Marine, so before I went over to Bulgaria (to shoot ‘The Outpost’), I went to my brother who was living in San Diego at the time. He worked me out a bit. He gave me a regimen to follow. When he wasn’t working, he spent it going over with me. We’d watch certain war films.

“He kept stressing to me what everything meant for him. And what it came down to for him—it was about brotherhood. He was telling me he does what he does for the other soldiers around him. So he was trying to show me the importance of this.”

Caleb was also able to spend some time with the real-life Ty Carter. “He lives just outside of Austin,” the actor said.

“He picked me up from the airport, took me over to his house and we just hung out for a good while. I stayed the night. So I did get to spend some time with him. He was completely open about anything that I needed to know. He was very adamant in letting me know and said, ‘Caleb, ask me anything. Nothing’s off guard. Let it go.’

“Looking back, part of me wishes I asked him more, but I felt like I needed to also make some room between myself and him. So that I could come at it from a place where I was able to make it intimate and personal for myself and at the same time try to do my best at conveying the emotions I know he had at certain times.

“There was a good two weeks when he and my other brother Marine were there. They were both sitting behind a monitor, and I knew very quickly if I was on the right (laughs), if I was showing fear or if I was not showing enough fear. It was harder to have my brother there, in a way.”

In between shooting films, Caleb was able to make his debut album, “The Mother Jones,” which was released in May.

“Katya is probably part of the reason I did the album,” he emphasized his gratitude to his girlfriend. “I would have just sat on my butt for another three months if she didn’t help stoke the fire. Because she’s an artist, Katya has been invaluable in so many aspects of the creative process as well and not just emotionally. So without her, I don’t know if I would have done it, with the group of songs that I was going to do it with.”

It has been a steady climb for Caleb who started inauspiciously as Boy on Bike in Joel and Ethan Coen’s “No Country for Old Men.” He broke out on television as Jimmy Adler on “Friday Night Lights.” He has attracted some of the finest filmmakers, including David Lynch who cast him as Steven Burnett, Amanda Seyfried’s abusive husband, in “Twin Peaks.”

Caleb will be seen next in the sci-fi “BIOS,” opposite Tom Hanks, and the drama “The Forgiven,” alongside Jessica Chastain and Ralph Fiennes.

Read Next
Possibility
EDITORS' PICK
PNP: Checkpoints back in MECQ areas
Water remains our saving grace right now
A gem of a residence in the new normal
Smart 5G goes live
Been there, done that but what’s the difference between MECQ and GCQ?
BREAKING: 3,226 latest COVID-19 cases bring PH’s total to 106,330
MOST READ
MECQ guidelines in infographics
MECQ in NCR, other areas: Mass transportation suspended, quarantine pass required anew
Doctors group to Duterte: ‘There was never a call for a revolt’
James Corden reportedly in talks to replace Ellen as host of the scandal-plagued Ellen DeGeneres Show
Don't miss out on the latest news and information.