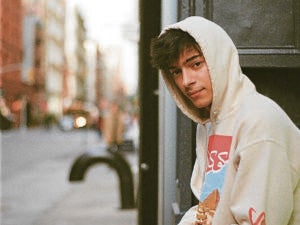 In his senior year in high school, rising Saudi-Ecuadorian artist Mishaal had the enviable dilemma of choosing between two prestigious universities and two of his biggest passions: It was either engineering at the Massachusetts Institute of Technology (MIT), or music at New York University’s Clive Davis Institute for Recorded Music.

He was torn. Computer science fascinated him as much as music did. But then, a personal tragedy struck—and one that ultimately led him to a decision.

“It was hard. During my last year in school in Jordan, where I lived for a while, I lost two close friends of mine. They passed away. But, at a time like that, I realized that the only thing that could help me through it was music,” he told the Inquirer in a recent video interview.

“I was in a dark place and music got me out of it,” the 21-year-old singer-songwriter said. “And if I can do that for other people, too, then I think that would be better than going to MIT.”

Today, Mishaal is one of RCA Records’ most promising talents. Prior to getting signed, he waded into the scene the same way many of his Gen Z peers did—by posting his work on social media.

In 2018, Mishaal began filling his YouTube and SoundCloud page with music, which he recorded at home using only an XBox microphone. His early songs, which included “Kid Goku,” “Addicted” and “Arabian Knights,” eventually gained traction, getting millions of streams across different platforms. Before long, his beats and vocals were being sampled and looped by numerous artists in the lo-fi community.

Aside from singing and writing his own songs, Mishaal also plays instruments, mainly the guitar, which he picked up at the age of 9, after breaking his arm in a freak accident. His doctor gave him a guitar and encouraged him to play it as a form of physical therapy; a way to perk up his spirits. Little did he know that that period would eventually solidify his interest in music.

Mishaal’s ambiguous sound doesn’t quite fit a specific genre. Though his music is closely associated with lo-fi, his aesthetic sounds more polished and with a palpable bounce.

He can do ambient and chill, but also upbeat and anthemic, as in “Friends,” a collaboration with lo-fi star Powfu. And while his vocal lines are often delivered in an unaffected, almost listless fashion, there are qualities and nuances to his tone that suggest he’s capable of more.

His work has all the familiar trappings of modern pop—hip-hop/R&B-inflected beats, indie pop sensibilities and contemplative themes and lyrics. But then, he makes it all his own by drawing inspiration from his cultures’ musical traditions.

“I grew up listening to a lot of Arabic and Spanish music. If you listen to ‘Arabian Knights,’ for instance, you will find out that it’s written in Spanish, Arabic and English,” said Mishaal, who was born and raised in Saudi Arabia to a Saudi father and an Ecuadorian mother. “I use a lot of beats and rhythm from the Middle East, as well as a lot of melodic structure from South American music.”

Mishaal, who also grew up loving the music of Michael Jackson, Pink Floyd and Metallica, urged other young artists of different cultural backgrounds to embrace their heritage. “So, whatever your heritage is, don’t be afraid to use it. It’s what makes you special,” he pointed out.

His latest single, “I Don’t Want to Wait for Summer,” was sparked by the sense of isolation he experienced while stuck in his New York City apartment in the middle of a snowstorm.

“I wrote the song in the winter of 2019, and I was far away from my family and friends. I was living alone and couldn’t leave because the building was blocked. I was also getting over a breakup. The situation I was in got me thinking, ‘I can’t wait for summer and meet someone new. I will be happy once this or that happens,’” he related.

Curiously, the message could have very well been inspired by what people around the world are going through right now amid the Covid-19 pandemic and the quarantine.

But Mishaal realized that, sometimes, happiness is what you make it.