Lin-Manuel Miranda on Rachelle Ann Go’s ‘Hamilton’ audition: She had all the fire

LOS ANGELES—“Rachelle just came in and she had all the fire necessary for ‘Burn’ and all of the incredible luminosity needed for ‘Helpless,’” Lin-Manuel Miranda, creator and star of “Hamilton,” recalled Rachelle Ann Go’s audition for the West End production of his acclaimed hit musical.

“Those are the songs we make you sing at the audition,” added Lin-Manuel in our video call as he readies a filmed version of the original Broadway production to make its global streaming premiere on July 3 on Disney+. With a score that blends hip-hop, jazz, R&B and Broadway, “Hamilton” is an eagerly anticipated event on Disney’s streaming service. 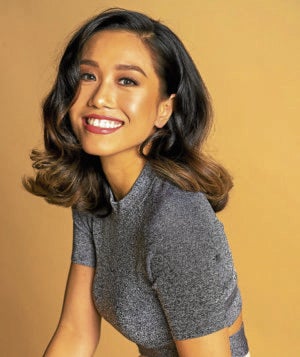 I had asked Lin-Manuel if he was present when Rachelle, Christine Allado and Isa Briones, among several Filipino actors who got cast in various productions of “Hamilton,” auditioned. He replied, “Of all the ones you mentioned, the only one I was physically at was Rachelle’s audition. I remember how special she was. That was one of the easier casting decisions we ever made.

“I was in London working in preproduction on ‘Mary Poppins Returns’ at the time, so it was total serendipity that I got to be in the room.”

Rachelle played Elizabeth Hamilton in the London production of “Hamilton” from 2017 to 2019.

“Everyone else, I remember seeing a taped audition,” shared the composer of the musical whose various productions around the world briskly sold tickets.

The musical theater genius of Puerto Rican heritage is on a laudable mission to create more roles for actors of color.

He said, “The joy of casting this show is in falling in love with new talent and providing a platform for artists of color to shine. Every time I write a show, that is my goal, to create the kind of musicals I didn’t see growing up.”

With a smile, the composer, lyricist, singer, actor, producer and playwright stressed, “I’m making up for lost time and writing parts for us because I didn’t see a way into this world. ‘In the Heights’ came from a desire to be in the world of musical theater and not play Bernardo [in ‘West Side Story’].” Lin-Manuel is keeping his promise. He just announced that he’s working on an animated musical set in Colombia.

The multihyphenate, who was calling from Washington Heights, New York, stood up to show the view of the George Washington bridge from his home office. He’s sitting out the pandemic with his family.

“It’s funny,” he said. “In another timeline, in a noncovid timeline, you and I will be talking about ‘In the Heights’ right now and not ‘Hamilton.’” Indeed.

Director Jon M. Chu’s movie adaptation of “In the Heights,” Lin-Manuel earlier Broadway musical, originally scheduled to open on June 26, will now debut in cineplexes in June next year. Producers hope that by then, people can fully enjoy “In the Heights” in movie theaters. 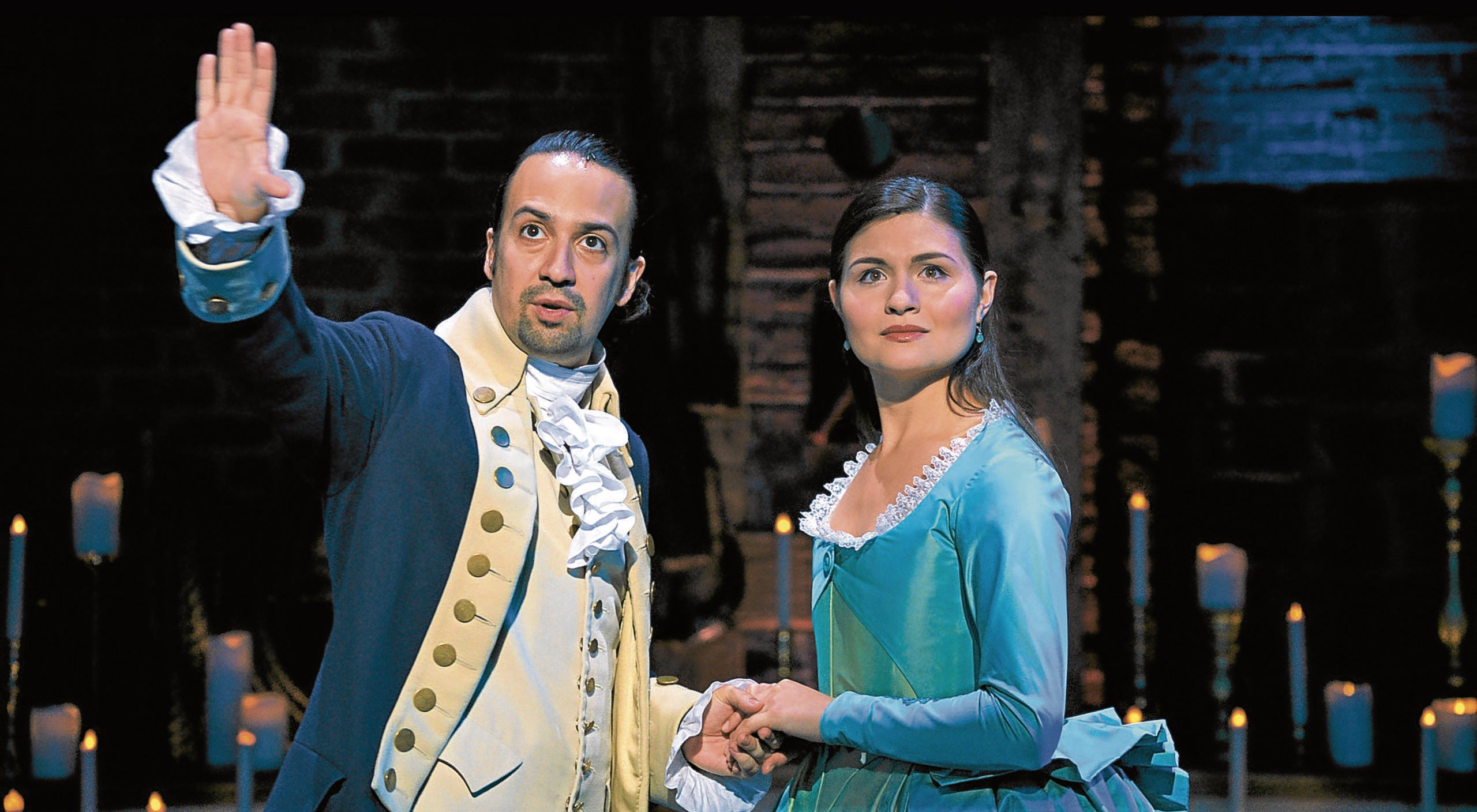 Miranda (left) and Phillipa Soo in “Hamilton,” the filmed version of the original Broadway production. —DISNEY+

In the meantime, Lin-Manuel is excited that “Hamilton,” which won 11 Tony Awards and the Pulitzer Prize for Drama, will finally be seen by more people around the world. Many people were driven away from watching the stage musical because tickets were often sold out and the prices were steep.

In his own words, Lin-Manuel describes “Hamilton,” based on the life of Alexander Hamilton (which he plays), one of the Founding Fathers of America: “It’s about a young man who came from impossible odds, poverty and incredibly tough origins in the Caribbean to the mainland, just as the American Revolution is starting.

“It’s really an immigrant narrative, about someone who comes here from somewhere else and on the strength of his writing, he writes his way out of poverty, into the formation of this country.

“But he also writes his way to ruin. It’s a tragedy, narrated by everyone closest to Hamilton, and that includes Aaron Burr, the man who shot him, who was a friend, soldier and fellow lawyer, as well as Hamilton’s wife, sister-in-law and George Washington.”

He said that “Hamilton” was relevant as ever. “If there’s any political insight, the biggest one is, the problems and paradoxes present in the origin are the fights that we’re still having.”

To shoot a filmed version of “Hamilton” with its original cast while it was the hottest ticket on Broadway was a struggle, according to Lin-Manuel. “We had to film this moment while we were still in our first-year contract,” he explained. 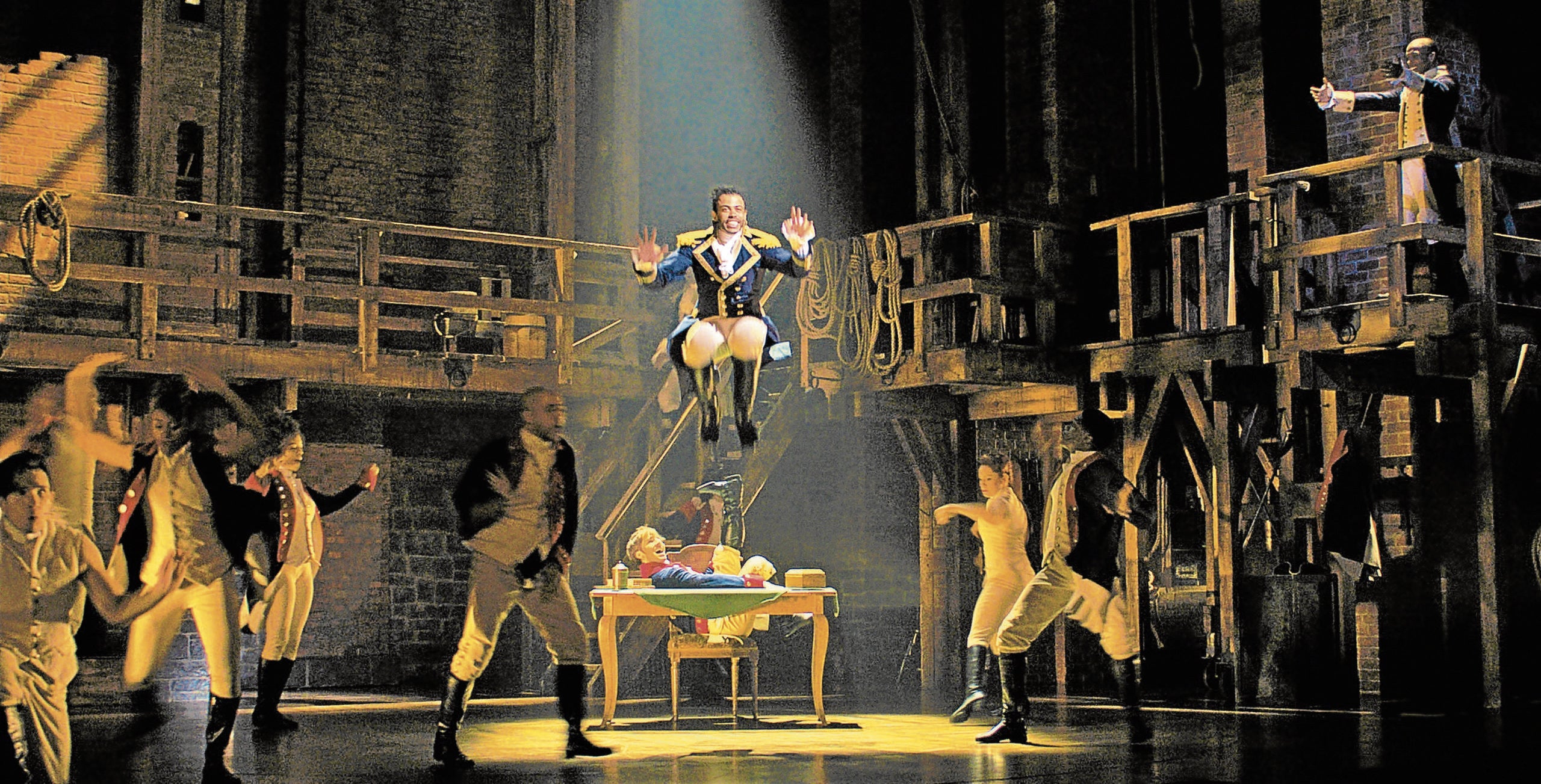 The composer, who just needs an Oscar to join the elite EGOT circle, said, “It was hard to plan a movie shoot while you’re doing eight shows a week, but we were able to pull it together, literally the week before I left the show. We filmed this on June 25, 26 and 27 [in 2016]. I left the show the next weekend, along with Leslie Odom Jr., Phillipa Soo and Ariana Debose, all original members.”

He cited that the filmed version will give the viewer a vantage point that even the best seat in a theater will not approximate.

“I fell in love with ‘Great Performances’ [telecasts of] like ‘Into the Woods’ and ‘Sunday in the Park with George.’ But I think this surpasses that in terms of the vantage point Tommy (Thomas, director) is giving the audience.

“Tommy has done an amazing job making a cinematic, theatrical hybrid. I’m excited that this is the first film version that people will get to see because I spent six years writing this version.”

Among the many celebrities who showed up to watch “Hamilton” were Prince Harry and Meghan Markle. “It was surreal because his sixth great-grandfather (King George III) is a character in my show,” Lin-Manuel said of the Prince, who sang onstage a few bars of a “Hamilton” song after a performance.

“Prince Harry’s charity does wonderful work and we were honored to be able to help in raising money for that. I was playing it so cool, but you can see how stressed out I was in every picture. I was like this [demonstrates being tense].”

And the most unforgettable ticket request from a celebrity? “It was an email from the late, great Aretha Franklin,” Lin-Manuel said with a grin. “I was thrilled to get her the tickets (laughs). But no one ever expects an email from Aretha Franklin. That was probably the most amazing thing to land in my inbox in that first year.” 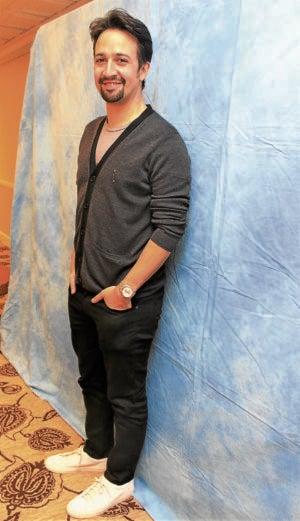 On the influence of his dad, Luis Miranda Jr., who was a Democratic Party consultant (his mom, Dr. Luz Towns-Miranda, is a clinical psychologist), on his work, Lin-Manuel said, “That gives me an awareness and aptitude for politics. But it also gives me an aversion to politics because, to quote Aaron Burr, ‘I have seen how the sausage gets made.’ I was registering voters, instead of having a newspaper route as a child. I think I inherited my love of the arts from him and my mother.”

The parallels of his dad’s life with Hamilton’s permeate the groundbreaking musical. “The thing that made me feel like I understood Hamilton as a character was the fact that this is a kid who grew up in the Caribbean and wrote his way to a scholarship on the mainland. That’s exactly what my father did at the same age as Hamilton.

“It was a tipping point in making me go, I know this guy. I know how to write him because if there is anything Hamilton and my father share, it’s that they were f***ing relentless.

“So when I’m playing Hamilton, I am playing Luis Miranda. I think that comes through very strongly in JJ’s (director John James) documentary (‘Siempre, Luis’). I’m looking forward to you seeing it.”