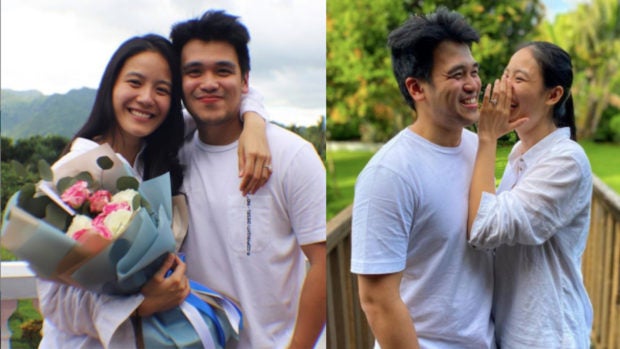 Ritz Azul got engaged to her non-showbiz boyfriend Allan Guwi, who recently popped the big question to the actress at a farm in Batangas.

Azul showed her engagement ring while posing beside her fiance last Saturday, June 20.

“This Guy’s in love with me, pare,” she said, alluding to the Parokya ni Edgar song.

The actress recalled their love story and how Guwin proposed to her on a follow-up post on Monday, June 22. Azul and Guwin met in 2016. They became best friends and Guwin became one of the people Azul could trust in life.

“Hindi ako naghahanap ng boyfriend dahil nangako ako sa sarili ko na hindi ako magaasawa para hindi ako mahirapan in the future,” she said. (I was not looking for a boyfriend because I promised myself that I will not get married so that I would not have any difficulties in the future.)

After they became “best of best friends,” Guwin showed some signs that he loved Azul more than just a friend. The actress told the guy to love somebody else but Guwin said that he was in no rush to be with Azul. He also promised to be by her side, no matter how long it takes.

The actress said Guwin stayed true to his promise and is now beloved by her and her entire family.

Despite a few challenges on the day of the proposal, Azul described the moment as “magical.” Apparently, Guwin was initially planning to propose to her in Switzerland, but due to the pandemic, he instead asked for Azul’s hand on his family’s farm in Batangas.

(It was raining at first, but the moment he proposed, the sky cleared up and the mountain was even visible. After he proposed, it started raining again.)

The actress wanted to share her love story with fans and followers to give people hope during the COVID-19 crisis.

(In the middle of the pandemic and amid everything that is going on around the world, there are still good things happening, not only ugly things. I also want to share that sometimes, waiting could make one’s life story beautiful.)

Azul has starred in the ABS-CBN TV series “Los Bastardos” and “The Promise of Forever”. JB