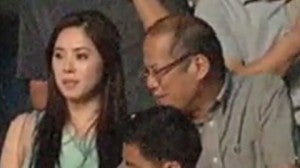 President Benigno Aquino III and Grace Lee (Video grab from ABS-CBN news program Bandila, which has been uploaded on the ABS-CBN news website)

A dose of bossa nova on a hot summer night wouldn’t hurt.

President Benigno Aquino III had a welcome respite from the sweltering weather and dealing with the country’s problems when he spent some two hours indulging in one of his passions, music.

He was in the company of his constant date, radio-TV personality Grace Lee, at the Sergio Mendes and Brasil 2012 concert on Tuesday night at Smart Araneta Coliseum.

People learned that Mr. Aquino would be watching the show because of the presence of the Presidential Security Group in and around the Big Dome.

Those seated at court side were eager to take photos of the couple, but were disappointed when the President and Lee were led to an area of the lower box section reserved for the Araneta clan.

The Philippine Daily Inquirer tried to take a snapshot when the President entered the venue, but was stopped by his bodyguards.

Also spotted enjoying the concert were a number of other popular figures, including former President Joseph Estrada with wife Loi, businessman Tonyboy Cojuangco with partner Gretchen Barretto, and club owner Louie Ysmael, who came with Karen Jimeno, one of the defense lawyers in the impeachment trial of Chief Justice Renato Corona.

She seemed overwhelmed by the thought of front-acting for a major foreign artist like Mendes before a large number of people, and was groping for words while doing her spiels.

Mendes’ first two songs, “Waters of March” and “Pretty World,” were the same tunes he opened with during his last gig at the Big Dome six years ago. But this time he played them with a more syncopated beat, adding freshness to the original studio versions.

When Mendes greeted the crowd, he explained that his native Brazil and the Philippines shared common traits—their people are romantic and love to party. He hinted that his show would take a musical journey through bossa nova—a slower variation of samba, a Brazilian creation—and other sounds associated with his career.

What followed was his take on “Girl from Ipanema,” whose music was originally written by his friend and contemporary, Antonio Carlos Jobim. Mendes’ voice was soothing, his playing on the keyboards sprightly.

The audience roared with approval upon hearing a succession of classic selections by Mendes: “The Trouble With Hello Is Goodbye,” “Agua de Beber,” “One Note Samba,” “Going Out of My Head” and “Bridges.”

Most of the vocals were handled by a duo of female singers, a trademark of Mendes’ act which first gained worldwide notice when he scored a hit, “Mas Que Nada,” featuring the young Lani Hall as part of his band, Brasil 66.

Though many of his recorded pieces were cover versions of other foreign artists, Mendes’ popularity grew far and wide because he transformed these tunes with his own cool and soothing touch, with a dash of jazz.

He has also updated his sound with contemporary genres like hip hop, which he successfully employed during the show when “Agua de Beber” featured a singer rapping along to the song.

Another track, “Chove Chuva,” had a funky groove, Mendes attacking the keyboards with child-like delight.

His band delivered the goods as well, improvising with excellent timing, but knew how to stop during their solo spots.

The hits kept coming—“Like a Lover,” “Fool on the Hill,” “The Look of Love,” “Mas Que Nada” (similarly updated with rap lines)—and goaded the crowd to stand up and dance to the intoxicating music.

Mendes likewise played a new track, “Tristeza” from the animation film “Rio,” proving that he’s still in the loop and not a has-been trying to milk money via the oldies-tour route.

As a whole, the concert was a celebration of the vitality of two cultures—Brazil offering its music, and the Philippines responding with its propensity to have fun in good or bad times.

If Mr. Aquino and Lee were still at the Big Dome when Mendes played one of his ballads, “Never Gonna Let You Go,” near the show’s end, they would probably have felt so romantic.