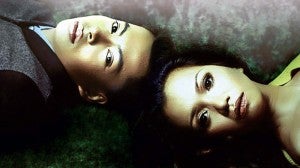 Hers is a filmography that even big local mainstream stars would surely envy: Marife Necesito shared the screen with international stars Michelle Williams and Gael Garcia Bernal in Lukas Moodyson’s “Mammoth,” which debuted at the Berlinale in 2009.

She has been tapped to appear in Korean (“Tropical Manila”), Dutch (“Lilet Never Happened”), American (“Darkest Night”) and HBO (“Going Back”) productions.

Recently, she acted in Fil-Am director’s Ron Morales’ “Graceland” which screens at the Tribeca Film Festival in New York this month.

Hardly anyone asked for her autograph, until recently.

When “Mammoth” was shown at the Cine Europa fest in Shangri-La mall, she was mobbed by local film buffs. “I had goose bumps,” she said. “It’s great to be appreciated in your own country.”

“She’s intense. She gives her all,” said filmmaker Archie del Mundo, who is currently collaborating with Necesito in the stage adaptation of Emman de la Cruz’s Cinemalaya film “Sarong Banggi.”

Necesito was a komiks novelist and romance-book author before becoming an actress.

“Her being a writer is a big help on the set,” said another filmmaker, Mark Shandii Bacolod, who directed Necesito in “Sponsor.” He added: “My friends couldn’t believe her monologue in ‘Sponsor’ was all her own, not scripted.”

Having trained under theater stalwarts Cecile Guidote-Alvarez and Angie Ferro, Necesito pushes herself with each new role.

She auditioned for the role of Gloria, the domestic helper of Bernal and Williams, in “Mammoth.”

Necesito recounted: “Michelle was so immersed in her role, she’d be in character even off the set chatting with us. Gael was more relaxed. He was very Filipino in his ways, joking around between takes, but once the cameras started grinding, it was as if he was possessed.”

She admired the egalitarian system in the foreign production. “The director wasn’t a tyrant at all. We were all treated equally. Whether you were a utility man or an actor, you were shown respect.”

It called to mind a bad experience on the set of the local soap “Amaya,” where she was shabbily treated by a staffer who said she didn’t deserve a dressing room because she was “not famous.” Her mentor came to her defense. “Tita Angie (Ferro) fought for me.”

Speaking of occupational hazards, does she mind that she’s boxed as a maid or a prostitute onscreen?

“I don’t mind,” she said. “I just make sure that each maid or prostitute I play is different. In reality, no two people are similar, even if they’re in the same line of work.”

In “Sarong Banggi,” she again portrays an aging hooker who “breaks in” a teenager [played by Rob Joseph]. She also serves as producer for the play, which debuts at Music Box in Quezon City Thursday night. It will next be toured in Singapore and Malaysia.