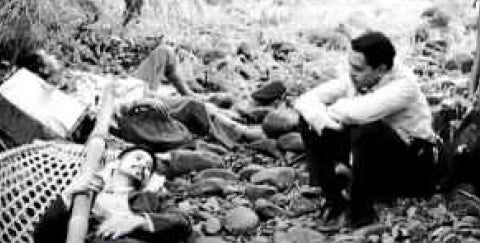 The online news site We the Public described “Hele sa Hiwagang Hapis” (A Lullaby to the Sorrowful Mystery) as director Lav Diaz’s “love letter to Philippine history,” a staggering eight-and-a-half-hour opus that will stream live for free on YouTube for three days starting today, Independence Day.

The film won the Silver Bear award in 2016 at the prestigious Berlin Film Festival in Germany in the category of “a feature film that opens new perspectives in cinema.”

It has, according to the news site, “interlacing stories from real-life wars, Jose Rizal’s famous characters (in “Noli Me Tangere” and “El Filibusterismo”), mythical legends, songs and poems.”

“It’s a short film,” Diaz joked when he accepted the award for what was said to be the longest competition contender in the 66-year history of the film fest popularly known as the Berlinale.

In his speech, Diaz said: “I want to dedicate this award to all filmmakers who still believe that cinema can change the world.”

Already, “Hele” has changed the concept of mainstream and independent cinema, said Diaz in response to how he managed to convince mainstream stars Piolo Pascual, John Lloyd Cruz, Cherie Gil, Alessandra De Rossi, Menggie Cobarrubias, Ely Buendia, Joel Saracho, among others, to work with him despite the notoriety of his unconventional movies.

“Somehow, the notoriety of my works earned me the right to work with them,” Diaz told Inquirer in an email interview.

“They want to work with me, why not? It’s a privilege and I am forever grateful. And it’s good for Philippine cinema. The wall that divides the mainstream and the so-called independent cinema is gone. It’s a myth anyway. There’s no mainstream or independent cinema. There’s just cinema. All cinema workers are cultural workers. Magkakasama lahat. It’s a continuum and it’s homologous,” he said.

Diaz’s “notoriety” refers to his predilection for making long films, which include 2001’s “Batang West Side” (five hours, 15 minutes); 2008’s “Melancholia” (seven hours, 30 minutes), a winner at the 65th Venice International Film Festival; 2006’s “Heremias: Book One: The Legend of the Lizard Princess” (eight hours, 39 minutes), and, by far the longest, 2004’s “Evolution of a Filipino Family” (nine hours, 53 minutes).

The director’s reputation apparently precedes him.

International news outlets reported that during the screening of “Hele” in Berlin, some viewers brought inflatable pillows and granola bars.

A man was said to have “rolled a cigarette while still in his seat so he wouldn’t miss too much when he popped out for a smoke.”

Another man said that playing long video games had prepared him for the experience.

Also in the audience was Hollywood superstar Meryl Streep, who headed the seven-member jury that picked “Hele” as winner. After the screening, Streep was quoted to have said: “This film. This guy. He changed the molecule system in my body.”