Coronavirus: When a kiss is not a kiss as Bollywood makes films in pandemic times | Inquirer Entertainment

Coronavirus: When a kiss is not a kiss as Bollywood makes films in pandemic times 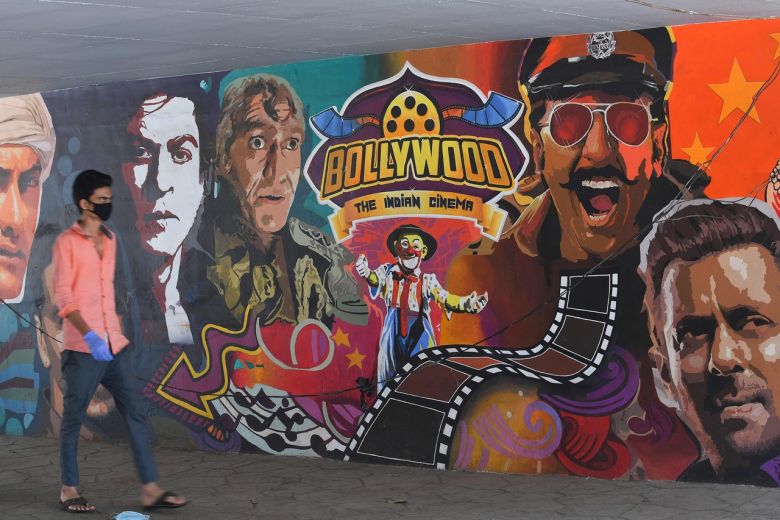 A man walks past a wall mural of Bollywood actors in Mumbai. on May 8, 2020. AFP via The Straits Times/Asia News Network

NEW DELHI — A joke is doing the rounds of Bollywood these days. It is about how filmmakers will have to revert to old demure means of portraying physical intimacy on screen – such as two flowers brushing against each other to indicate kissing, a tactic that was used decades ago.

Cutting out scenes of physical contact between actors is one of the many trade-offs India’s Hindi film and entertainment industry has to make for now as cameras begin rolling after a three-month hiatus in Mumbai.

Amid new health and safety guidelines to keep a raging Covid-19 pandemic at bay, Bollywood is being forced to take up a lean working model and give up some of its famed scale and glitz. Gone for now, for instance, are the elaborate dance routines that featured hundreds of performers and wowed fans across the world.

While permitting the resumption of film and television shooting in non-containment zones, the government of Maharashtra on May 31 released an elaborate 16-page set of safety guidelines for producers.

Besides ensuring minimal physical contact, the rules include measures such as cutting down crew size (excluding the main cast) to a third of pre-pandemic levels, using India’s contract tracing app and having virtually conducted casting sessions.

The permission to resume work, despite the limitations and additional costs these guidelines bring, has brought relief to an industry saddled with growing losses worth billions of rupees, including losses from forgone box-office revenues, idle sets and mounting interest payments on funds raised for films.

The Producers Guild of India has welcomed the guidelines and said it would work with all key stakeholders to “support and enable the smoothest possible implementation of these guidelines”. But the enthusiasm to resume work comes tinged with concern about the pandemic that has shown no signs of abating.

Densely-populated Mumbai, where India’s Hindi film industry is based, has been hit badly by Covid-19. On Sunday (June 7) morning, it accounted for 25,794 active confirmed coronavirus cases, more than half of the state’s tally of 42,600 and nearly a fourth of the country’s total of 115,942.

It is because of this worrying Covid-19 crisis that many in the industry are still reluctant to start work. Mr Raghav Gupta, the business head for Drishyam Films, a Mumbai-based film production house, told The Straits Times its office remains shut and staff have been asked to work from home until July. “We will take a call after that. We don’t want to risk anybody’s life,” he said.

While some are expected to start shooting as early as this month, Drishyam Films, like many other production houses as well as cautious actors, has adopted a wait-and-watch approach. Shooting for two films, involving specific outdoor locales outside Maharashtra, was scheduled to begin this month before the pandemic upended the plans. It has now been put off until December.

“We have an unprecedented time ahead of us and we don’t know how long this pandemic will go on for,” Mr Gupta added.

A screenwriter based in Mumbai, Mr Mayank Tewari has been working through the lockdown keeping in mind an “optimistic long-term perspective” that factors in growing opportunities from web-based shows.

“I am assuming that whatever I am writing will not be shot before January or February next year,” he added. “It is something I can, thankfully, afford to do.”

Mr Ramesh Ramprasad Yadav, a junior artiste, doesn’t have that luxury though. He is among the estimated 650,000 daily wage workers in Bollywood who have been out of work since the industry sputtered to a halt in mid-March. Actors like him would be hired for brief appearances as a cop at a police station or an individual at a crowded marketplace.

While he had hoped to start working again, roles meant for him have been dispensed with for now as safety assumes greater priority while filming. “It doesn’t seem work will resume soon for those like us,” Mr Yadav told The Straits Times.

The guidelines recommend avoiding elaborate sequences such as those at weddings and markets, as well as avoiding the presence of junior artistes. “I am not sure when we can return to work. Maybe when a medicinal cure or a vaccine is found,” he added.

Some of the rules meant to restart Maharashtra’s entertainment industry:

• Daily fumigation of all sets and post-production set-ups;

• Shooting to be held in a “completely locked down” environment;

• No actors beyond 65 or those below 10. This means veteran actors like Amitabh Bachchan cannot resume work yet;

• Transparent face shields for those who come in close contact with actors and crew.

Read Next
‘Make It with You’ director on decision to cancel show: ‘Difficult for everyone’
EDITORS' PICK
Individuals affected by ‘Karding’ now over 157,000
Newbie gamers are in for a treat with the power-packed feature of vivo Y16
House energy committee chair Arroyo bats for cheap electricity
Bongbong Marcos says PH ‘open for business’ with new Clark Airport terminal
Karding damage to infrastructure at P23M
Reignite your passion with the vivo Y35
MOST READ
LPA enters PAR, may develop into tropical depression
Angelica Panganiban ‘duguan, sugatang mom’ one week into breastfeeding
Security guard shoots 2 other guards dead inside Makati subdivision
Badoy not with Office of the President, NTF-Elcac, under Marcos admin — solon
Don't miss out on the latest news and information.