Sharon Cuneta would “always feel helpless and even useless” when thinking about daughter KC Concepcion, according to the Megastar in a recent interview with Inquirer.

She revealed she worries about KC’s “health, and … [the fact that] she lives alone only with her two dogs, and is sometimes not feeling well.”

KC, in a recent interview, admitted to having polycystic ovary syndrome, or PCOS. She attributed this condition, which is a hormonal disorder in women, to her current weight problem. KC also said this was why she has not been accepting any show biz-related projects lately.

Sharon said she and KC haven’t seen each other or spoken on the phone since Christmas Eve, but “we text [each other].”

“No matter what, there is love between us,” Sharon said about the current status of her relationship with her eldest daughter.

She stressed that her love for KC would never wane, “because I am her mother and every mother would be willing to make tiis for her child.”

In January, Sharon revealed in a series of Instagram posts how she felt about her eldest daughter failing to join the family in celebrating the holidays. She clarified it was a case of “a mother missing her daughter.” 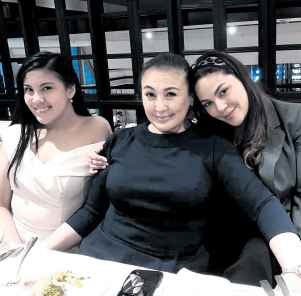 Aside from KC, her daughter with actor Gabby Concepcion, Sharon has two other daughters, Frankie and Miel, with Sen. Francis “Kiko” Pangilinan. She also has an adopted son, Miguel.

In March, the two appeared to have patched things up because Sharon promoted KC’s YouTube channel on her IG account. KC replied to the post by saying “I love you, Mama,” to which Sharon responded with: “You are welcome. I love you no matter what. That will never change.”

Just like most people who used to maintain a hectic schedule prior to the lockdown, Sharon said she’s now excited to get back to work. In fact, aside from a concert she was supposed to release a movie on Mother’s Day, but then “the virus made the decision for us.”

Sharon said she was sad to learn that a lot of her colleagues in the industry were displaced as a result of the pandemic.

On the newly formed National Live Events Coalition Philippines (NLECPh), organized by people working in various sectors that were largely affected when public gatherings have been called off, the singer-actress said: “I have to read through its goals and missions because frankly, it is the first time I’ve come across it, here in this interview. But kudos to them.”

One of the goals of NLECPh is to work with the government to come up with strategies to protect the workers, as well as their audience, from the virus.

“We want everyone to have a job, and since I am a musician, I want my fellow musicians and performers to continue working, too, somehow—same for other artists in the movie and television industries,” Sharon said.