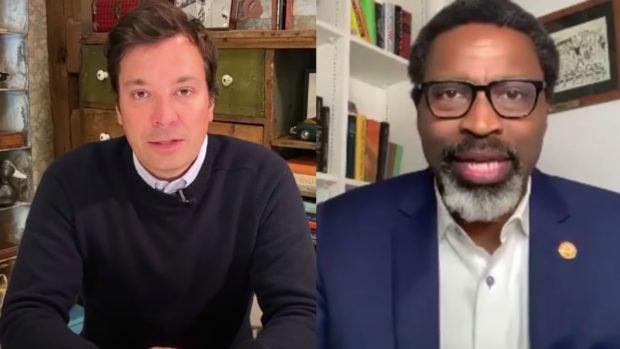 After a video of his “Saturday Night Live” blackface stint from 2000 resurfaced, talk show host and actor Jimmy Fallon owned up to his mistake and vowed to be a better ally to the African American community.

Fallon had a meaningful discourse with the National Association for the Advancement of Colored People’s (NAACP) president, Derrick Johnson, about how to fight and end racism, as protests continue all over the United States as an aftermath of the death of George Floyd in the hands of police. The discussion was held during an episode of “The Tonight Show Starring Jimmy Fallon”, uploaded on its YouTube channel last Monday, June 1.

The host recalled his appearance in “Saturday Night Live” back in 2000 when he impersonated fellow comedian Chris Rock by appearing in blackface. Fallon said he is “horrified” of what he did, not because others might “cancel” him for his behavior, but because he loves Rock and respects him “more than most humans.”

Fallon stated that he was previously advised to just keep quiet about the issue. In fear of “saying the wrong thing,” Fallon did stay silent.

“The silence is the biggest crime that white guys like me and the rest of us are doing,” Fallon said. “We need to say something. We need to keep saying something and we need to stop saying ‘that’s not okay’ more than just one day on Twitter.”

The actor declared that the world is angry and “we need to figure out a way to take the anger… and do something with it.”

How to be ‘a better ally’

Johnson commended Fallon for owning up to his past mistakes, emphasizing that people are born flawed. Fallon asked how people could be more conscious about their actions and how he and others could become better allies of African Americans.

According to Johnson, “racism is a learned behavior” and to unlearn it, people must first be honest with each other, create spaces to discuss it and be the example they want to see in society. He stressed that people must keep the dialogue open and appreciate the uniqueness each race has to offer. People also need to celebrate this uniqueness instead of creating otherness, he said.

Fallon added that white people must also talk to each other about racism.

The NAACP president defined anti-racism as the active participation to fight racism. Since racism is structural in nature, Johnson identifies an anti-racist as someone who is fighting to remove that structure.

He also asked where the world would be without some of the most notable African American artists in history, including Aretha Franklin, Eddie Murphy, Beyoncé, Jay-Z and more. Johnson noted that the world could have more creative minds if the racial barriers were removed.

“There’s so much we’re losing as a result of the structural barriers and institutional racism that currently exists,” Johnson said.

Lastly, Fallon and Johnson encouraged people to participate in NAACP’s activities and call for donations and volunteers. Johnson emphasized that people must address racism together.

“It’s not just the burden of African Americans, it’s a burden of all Americans,” he said. “This is an opportunity for us to do better, so we can be better.” JB

Read Next
Kim Chiu dancing on Edsa? It’s in a parking lot, actress clarifies
EDITORS' PICK
Over 3 Million worth of prizes to be won at Smart Padala’s SENDali Manalo Promo!
The best of bayside and city living at SMDC’s Sail Residences
Acer starts the year off strong with the Aspire Vero National Geographic Edition
EDITORIAL: Protecting the polls’ integrity
Comelec junks petition to scrap Bongbong Marcos COC
COVID-19 virus spread slowing down in Metro Manila, says OCTA Research
MOST READ
In Batanes, octogenarian dies of COVID-19
Drug lord Espinosa tried to escape through air vent at detention facility – NBI
When to get boosters after positive COVID test
Marcos Jr. visits Cebu, stands as ‘ninong’ to mayor’s son
Don't miss out on the latest news and information.