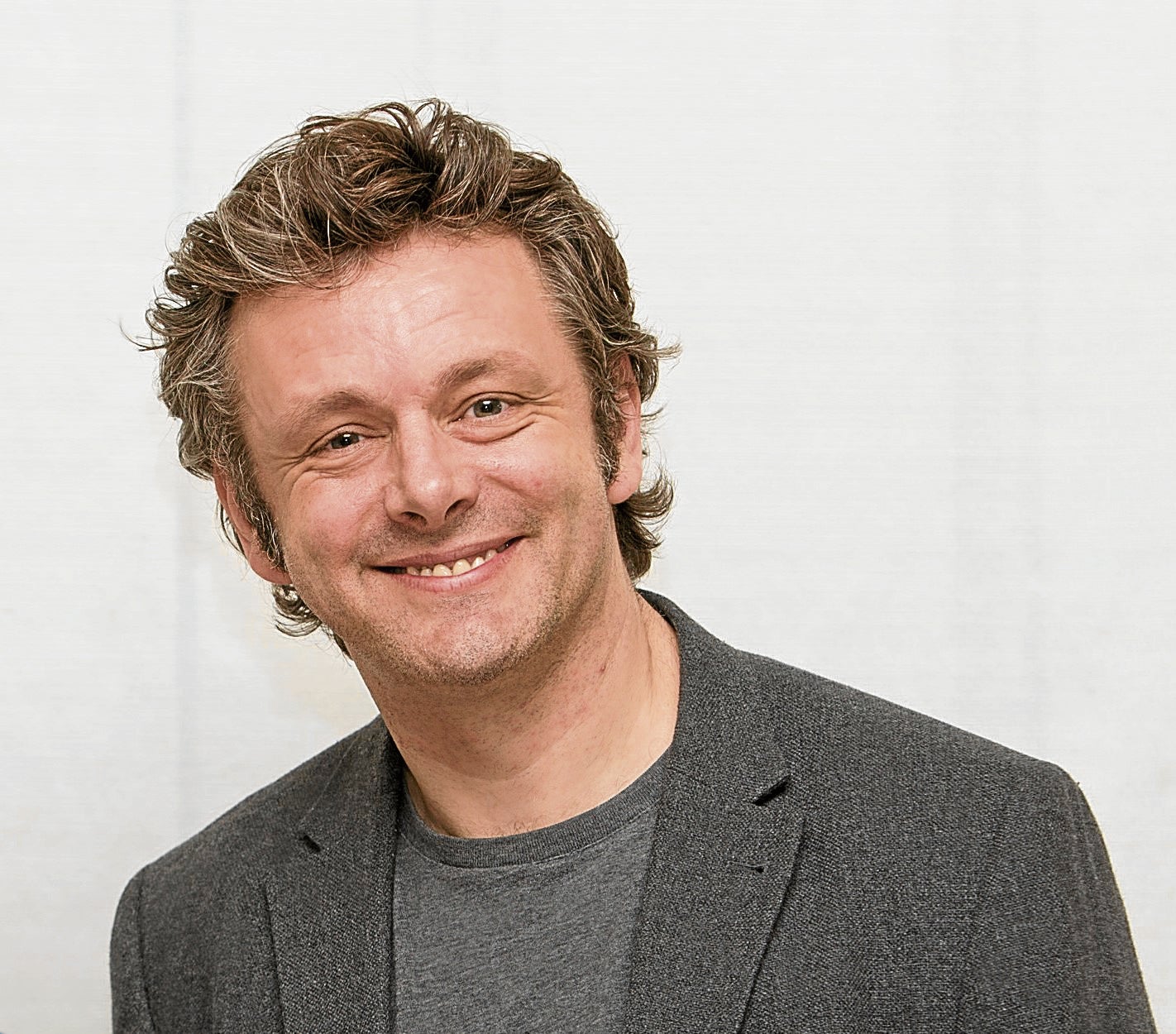 It has been 20 years since Michael became a first-time dad when he and Kate Beckinsale had Lily Mo Beckinsale-Sheen. Last September, the actor returned to playing one of his favorite roles—a father—to Lyra, his daughter with Swedish actress Anna Lundberg.

“It’s been 20 years since I did this,” Michael confirmed in a video call about becoming a dad again at age 51.

“To be a new dad with a little baby in lockdown as well is a very particular experience,” said the Golden Globe nominee for the TV drama series, “Masters of Sex.” “It’s been great because it means that her routine comes first. I know a lot of people have been saying since the lockdown that routine is such an important thing because otherwise, you end up living in your pajamas all day, not doing anything. But, of course, she has a routine that has to be stood by, so she dictates what happens in the day.

“We don’t get to watch anything because we’ve got to look after the baby all day. But it’s been wonderful. I’d forgotten a lot of things, which all comes back to you. Like the smell of diapers is quite full-on. She’s just started having a bit of solid food.

“And she’s got a walker that she zooms around in. That’s very funny. Lots of things have changed since. Now, you have a special base that goes into the car and you just click your car seat in and out, rather than wrangling with seatbelts.”

The Welsh actor added, “But the basics haven’t changed much, like the sleepless nights and changing nappies. But I’m loving it. She just brings joy to our lives every day.”

“I’m out in the Welsh countryside,” Michael shared where he was spending the pandemic lockdown with Lyra and Anna. “I’m in my kitchen. I’m about 30 minutes from where my parents live and where I grew up. So, in this lockdown situation, I feel grateful to have a garden here.”

As for his reel role in his other life, in “Quiz,” Michael plays Chris Tarrant, the host of the British quiz TV show, “Who Wants to Be a Millionaire?” Stephen Frears directs the dramatization of how Charles Ingram (Matthew Macfadyen) won the million-pound jackpot in the show. 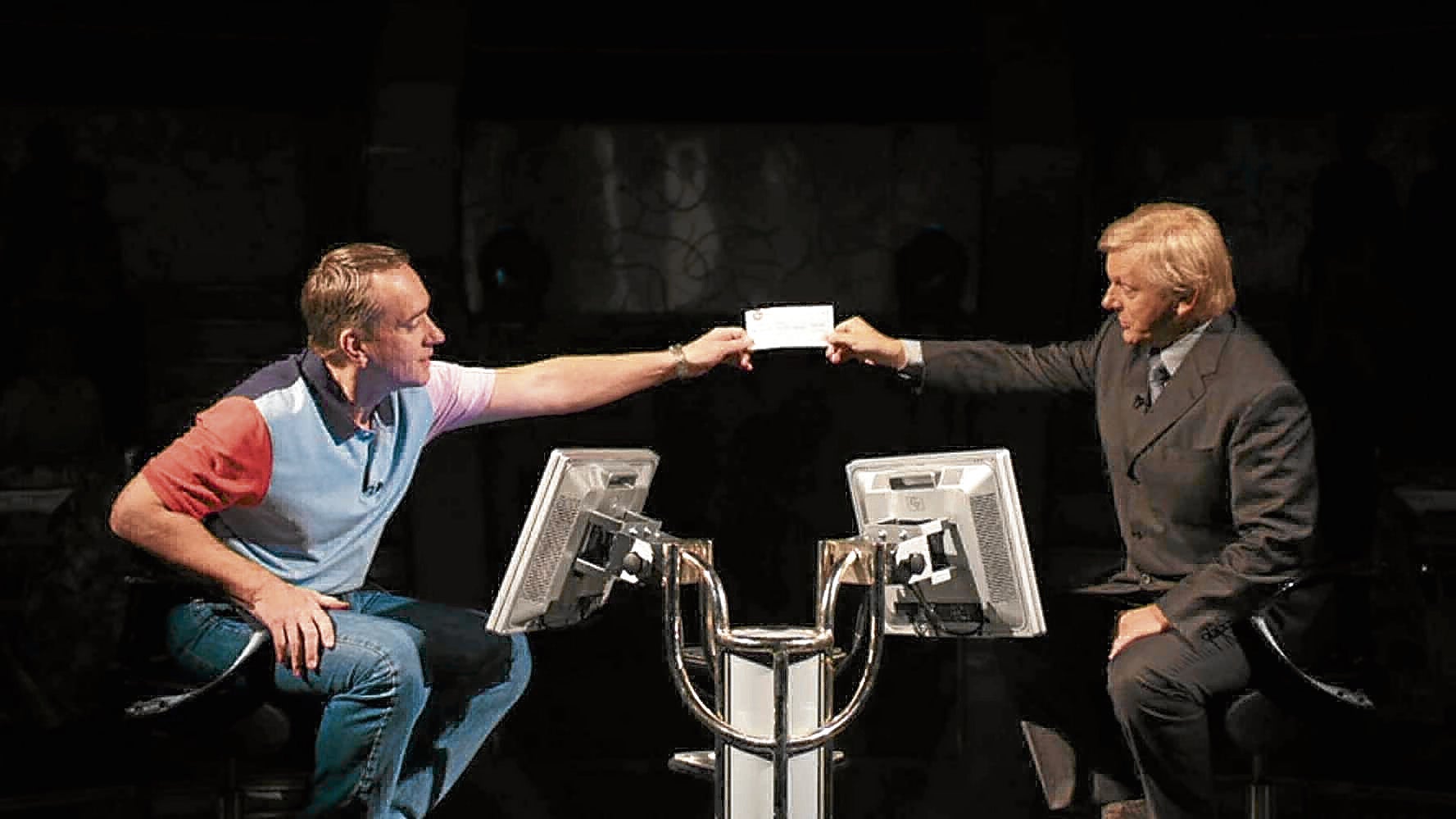 Charles and his wife, Diana, who was in the live audience of the show, were accused of cheating. They allegedly had an accomplice, Tecwen Whittock, who was also in the audience and was accused of coughing to signal when a correct answer was read aloud by Chris.

The three-episode series is based on James Graham’s play of the same title and the book, “Bad Show: The Quiz, The Cough, The Millionaire Major” by Bob Woffinden and James Plaskett. After a criminal trial, Charles and Diana were convicted of cheating.

Michael recalled the controversy that rocked the United Kingdom in 2001. “When it was happening, I had no idea about the background to it, much more about the character, certainly not the idea of this shadowy group organizing to get people on the show. So, it was all a revelation to me, as well.

“I suppose only Charles and Diana know whether they cheated or not. Even ITV (which aired the show) and the people who did ‘Who Wants to Be a Millionaire?’ are convinced that they’re guilty, but they don’t know how they did it.”

Michael convincingly embodied Chris, who was a popular figure because of the quiz show.

“Obviously, in this country, he’s so familiar to people,” said Michael, who has turned in acclaimed portrayals of real-life figures. “I grew up watching Chris not in ‘Millionaire,’ but in the children’s TV show (‘Tiswas’). He’s been a permanent fixture on TV and radio over here (in the United Kingdom).

“I know that when you’re portraying someone like that, the first thing that the audience in this country is going to think is how much is he like him?

“It was the same for when I played David Frost in ‘Frost/Nixon’ or Tony Blair in ‘The Queen.’ Outside of Britain, not many people know who Chris Tarrant is, unless you travel around.

“It was like ‘Frost/Nixon,’ which I first did onstage in London and New York, then the movie version. The audience reacted very differently to the character of David Frost in Britain to how they did in America because people didn’t know him as well in America.

“So with ‘Quiz,’ it will be interesting to see how people react to the character when they don’t really know who he’s based on. Chris Tarrant had a popular radio show in Britain for a long time, as well as all his TV work.” 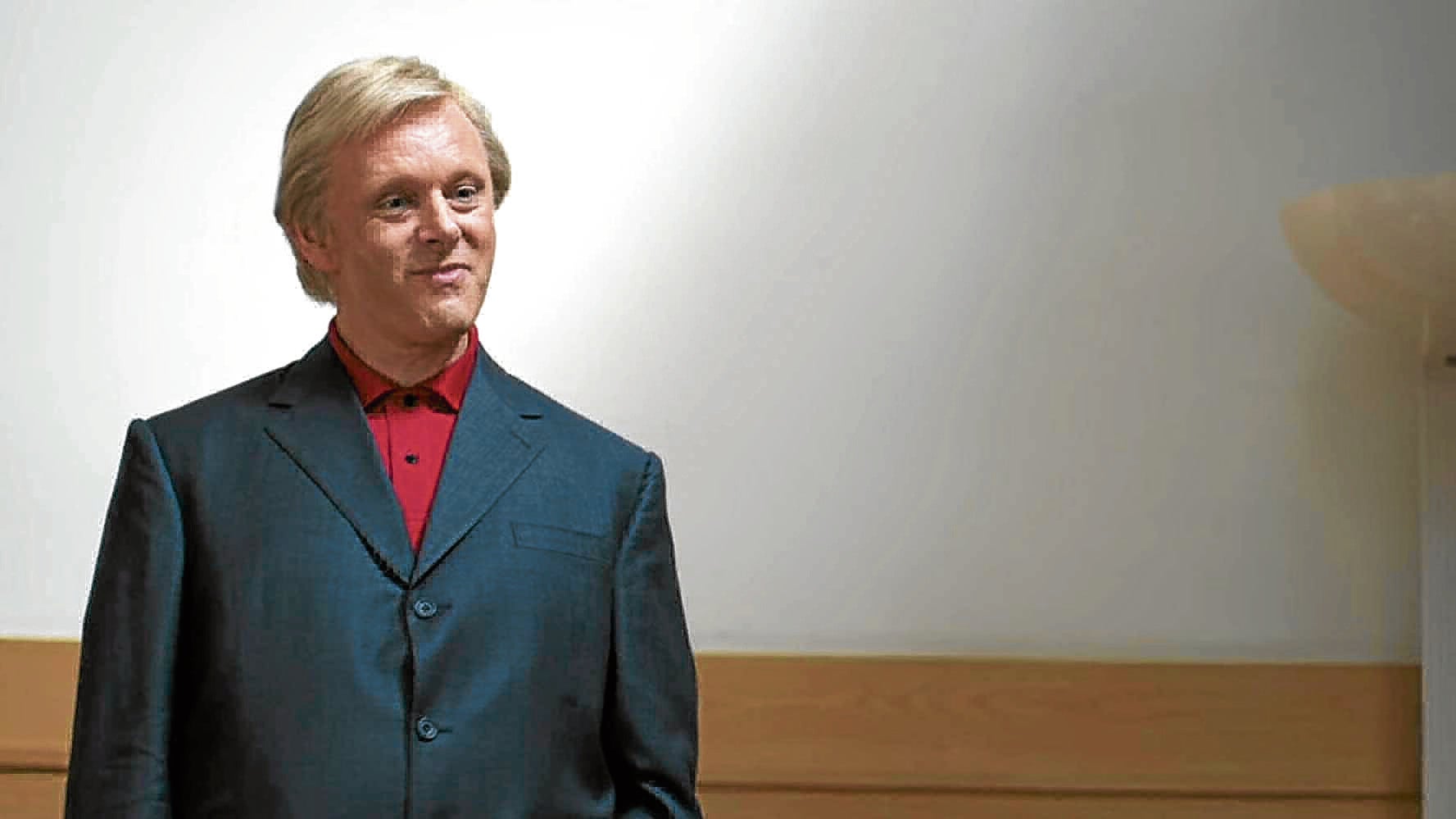 Michael Sheen as “Who Wants to Be a Millionaire?” host Chris Tarrant —AMC

In real life, the opposite happened to Michael—he gave away money when the funding for Homeless World Cup, which he helped organize in Wales, fell short.

“I ended up giving my money away last year because I organized a soccer tournament for people who’ve experienced homelessness or social exclusion,” he explained. “It’s called the Homeless World Cup, and it happens every year. Last year, we hosted it in Wales.

“All the money fell through, with only a few weeks to go, so I ended up giving my money away. I can tell you that that is quite shocking. So, it must be equally shocking to suddenly get a large amount of money.”

But Michael continues to work for good causes.

“I work with the Royal Society for Public Health,” he said. “We’re working on doing a report on the effects of online gambling during the lockdown.

“I [also] work with some people on domestic abuse, which is soaring during lockdown. The number of people getting in touch with helplines has gone through the roof. Because, for a lot of people, home is not a safe place. This lockdown is really dangerous, particularly for women.

“We’re seeing a lot of health workers dying … in the UK. I’ve also been trying to get personal protective equipment to people who are not in hospitals, but work in children’s hospices, care homes, homeless shelters and women’s refuges.” 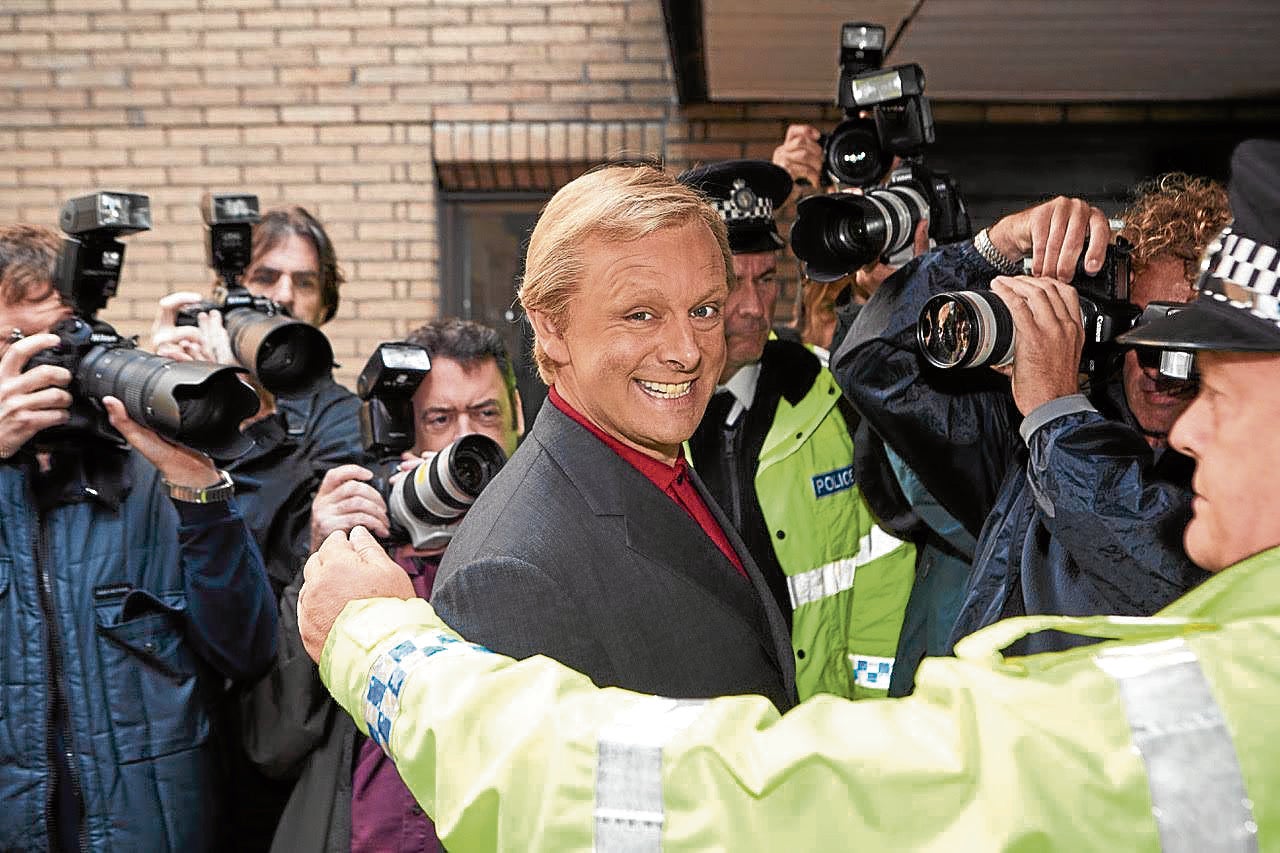 Michael talked about his other shows: “I had a wonderful time working on ‘Prodigal Son.’ It’s the first time I’ve done a TV show for a network. I did ‘Masters of Sex’ for Showtime.”

On “Good Omens,” Michael said, “One of the things that I’ve experienced over the last year is the fandom that has grown around this series that I did for Amazon, where I portray the angel Aziraphale, and David Tennant plays the demon Crowley.

“That has a passionate fan group, and I’ve become very close to [its members].”

But his most interesting fan experience still dates back to the peak of Kristen Stewart and Robert Pattinson’s “Twilight” franchise, where he played Aro.

“I remember being in Los Angeles and I was going to buy a pair of jeans,” he recounted. “I was in the changing cubicle, trying these jeans on. I remember coming out, opening the curtains, to look in the mirror. There was a group of teenage girls standing there who had obviously seen me earlier, and they were obviously big ‘Twilight’ fans. As I opened the curtain, they just screamed. And then, their parents came and took them away eventually. I was terrified.”