Gal Gadot surprises frontliners through video call: ‘You are the real heroes’ 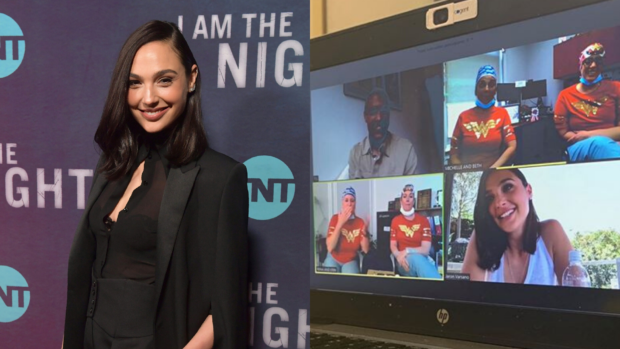 Gal Gadot surprised four frontliners who are fans of the superhero Wonder Woman during a video call to thank them for continuously treating patients during the ongoing COVID-19 pandemic.

The “Wonder Woman” star stressed that the four women were real-life superheroes for risking their lives to save others. Gadot joined the group’s call when they appeared on “Good Morning America” yesterday, May 27.

As to why they wear the shirts while treating patients, Cavanaugh explained: “Wonder Woman believes in people. She believes in love. She saves people when people can’t save themselves.”

“She’s the strongest chick I know,” the nurse added.

Meanwhile, Gonzalez explained that the T-shirt gives her a “little extra boost” when she is on duty at their hospital. Lailberte also noted that the shirt helps her believe she can “take on the world” during these unprecedented times.

After Lailberte spoke, the “Wonder Woman” star suddenly joined their video call. The four women were immediately shocked and cheered as Gadot popped on the screen.

“Ladies, can I please send you a virtual hug,” Gadot quickly told the group. “Oh my God, I’ve been listening to you for the past few minutes.”

“You are the real heroes. Let’s just make this clear,” the actress added.

“Everything you do is the real deal. You are risking your life for other people,” Gadot stressed. “I get emotional thinking about it. You are amazing, and thank you so much for everything that you do.”

Following the praise the frontliners had for the female superhero, Gadot expressed her gratitude for being able to portray the character.

“Knowing that women like you are using it and spreading the love and everything that is good, it is everything to me,” Gadot stated.