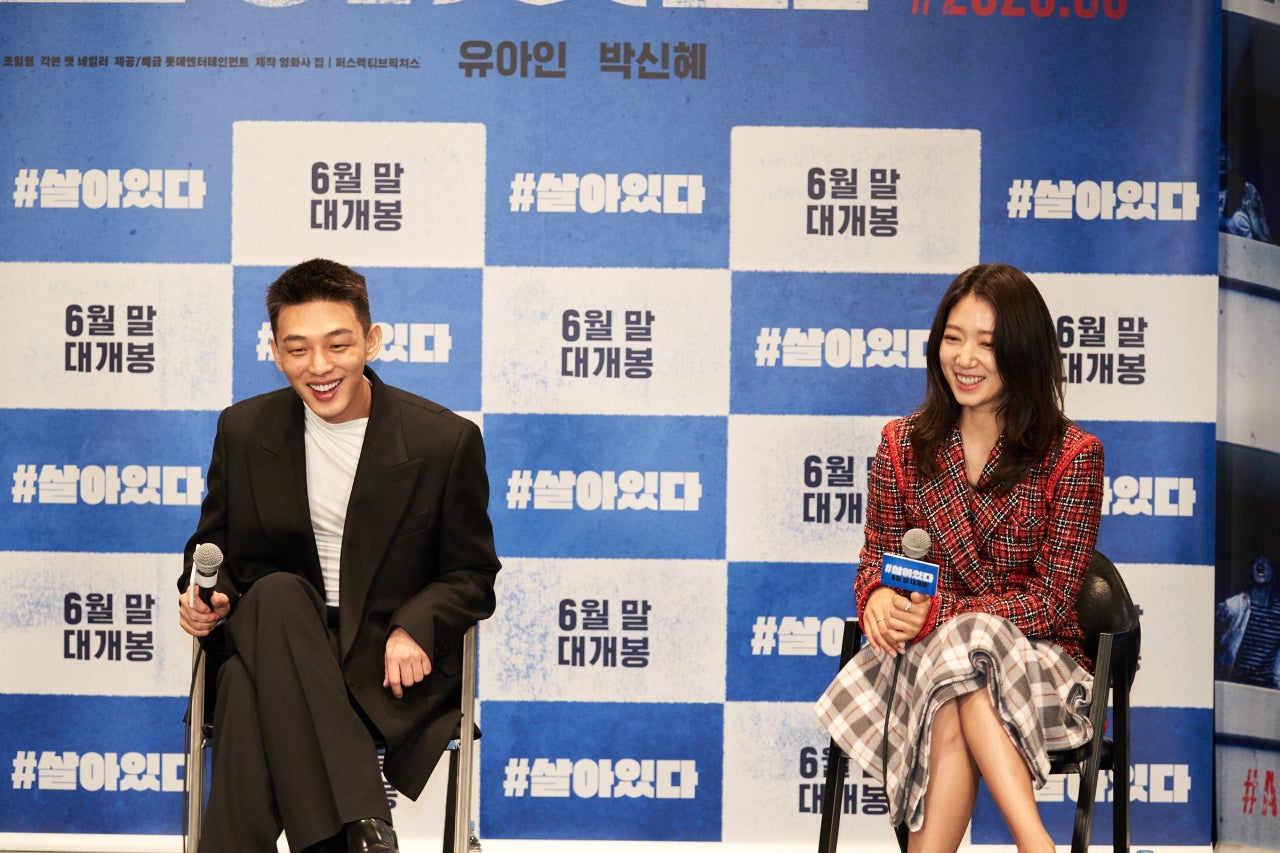 SEOUL — Actor Yoo Ah-in is returning to the big screen for the first time in two years, teaming up with actress Park Shin-hye in the survival thriller “#Alive.”

The actors will feature as two survivors living inside an apartment during the outbreak of an unknown disease that turns the infected people into zombies. Yoo and Park will each play two very different characters who struggle to survive in their homes using whatever objects and methods they have.

“Jun-woo is a YouTuber and a gamer. He tends to be sloppy and clumsy most of the time. He is an ordinary and friendly character who many people will be able to relate to easily. Being an early adopter, deft with electronic devices, and he uses these devices and tools to survive,” Yoo said during a press conference held Wednesday on the upcoming movie.

The media event, which was livestreamed online due to the COVID-19 pandemic, was also attended by actress Park. Director Choi Il-hyung was not present as he is in quarantine in the US where he is visiting his family.

Park’s character Yu-bin is the complete opposite of Jun-woo — an analogue person.

“Yu-bin is very private, an introvert. She’s very protective of herself, even in ordinary times. It turns out her lifestyle is perfect for the unexpected situation,” Park said.

As the hashtag in the title suggests, Jun-woo goes online to communicate with the outside world whenever he can get an internet connection and flies a drone to find his way out of the situation. Yu-bin, on the other hand, relies on classic climbing tools, such as ropes and a hatchet, for survival.

The movie is based on the 2019 US horror movie “Alone,” and the writer of the original movie Matt Naylor teamed up with director Choi to adapt the story for the Korean audience.

“The very original version of Naylor’s script focuses on people surviving alone in a disaster situation, and this differentiates the film from other zombie flicks. We made the film focusing on how to make the audience think about how they might act in the same situation as the film’s protagonists. We’re not superheroes, and in this situation where all the everyday connections we had — such as the internet and phone — have been cut off, how would we survive?” Choi said through a written message read by Yoo during Wednesday’s event.

“It’s a period when we think about what being ‘alive’ means. Making the film, I myself thought about how to live with other people and what the mission of survival means. I hope the audience also cherishes the feeling of ‘being alive’ with the film,” Yoo said.

“#Alive” is set to open in South Korean theaters on June 24.