Lea Salonga, Jed Madela and other Filipino singers performed a rendition of the 1996 hit “Seasons of Love” from the Broadway musical “Rent” to pay tribute to those who died of AIDS.

The artists banded together as part of The International AIDS Candlelight Memorial event yesterday, May 17. The Red Whistle, a nonprofit organization for HIV support in the Philippines, posted their performance on Facebook on the same day.

“World-class Filipino musical talents lend their voices in solidarity with people living with HIV all over the world to commemorate the millions of lives we have lost to AIDS,” the group said.

Morissette Amon, Kim Molina and “Ang Huling El Bimbo” stars such as Phi Palmos and Gab Pangilinan were among the rest of the artists who joined the effort.

Following the performance, Salonga took the time to thank the organization and its co-founder, Niccolo Cosme, for asking her to be a part of it. 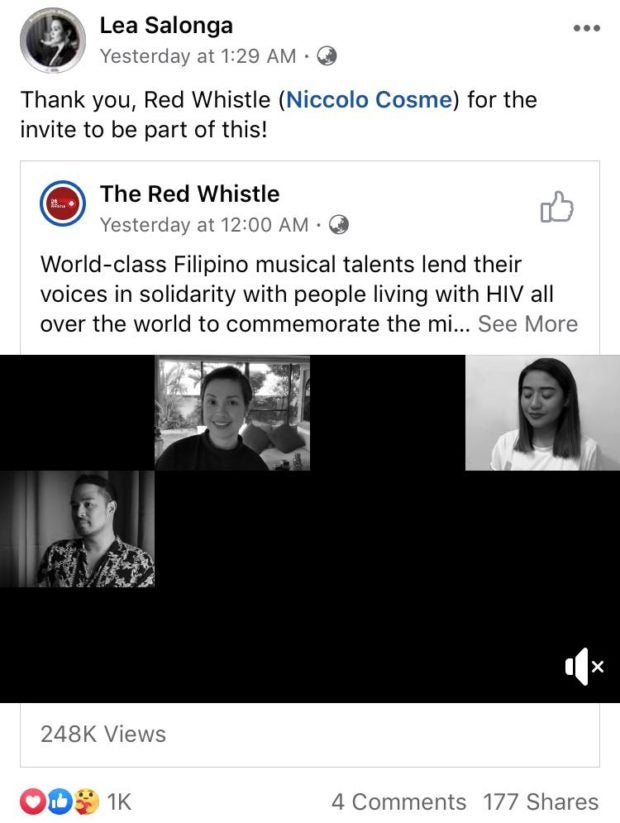 “Seasons of Love” was written and composed by American playwright Jonathan Larson. It is also often associated with other AIDS-related efforts such as World AIDS Day on Dec. 1 since four of the musical’s lead characters were diagnosed with HIV or AIDS. JB

WATCH: Morissette Amon, A1 perform ‘Like a Rose’ via video call