‘Eurovision that never was’ has fans pining for golden times 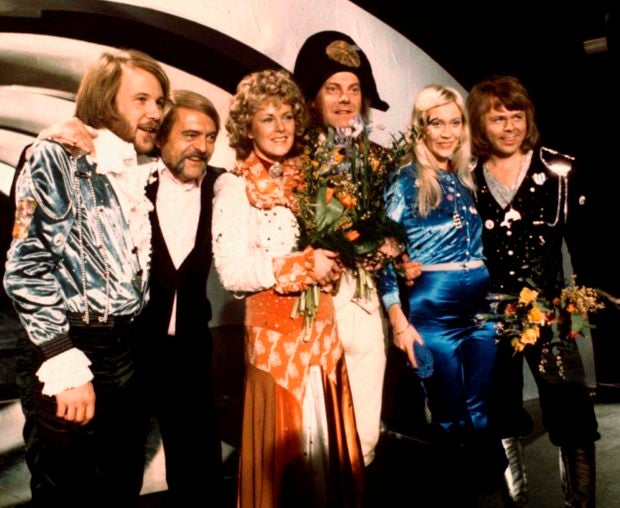 Members of Swedish group ABBA and close associates celebrate the victory of their song “Waterloo” in the Eurovision Song Contest in Brighton, England. Image: AP

BRUSSELS—Over its many years, the Eurovision Song Contest has come to be a sign of the times. So it is perhaps fitting that, in coronavirus times, nothing will be happening on Saturday at the scheduled venue of the Ahoy Hall in the Dutch port city of Rotterdam.

In 1974, it was ABBA that ushered in a new era for the once-staid and conservative song contest; in 2020, it is another acronym, COVID-19, and everyone hopes its reign will be brief.

Despite the cancellation of the contest that’s wildly popular in Europe and beyond, the evening of Saturday’s finale will bring some respite for diehards, with a remote television show bringing to over 40 nations many of the artists who normally would have been vying for a career-changing victory.

“We’re, like, 41 people that are all in some kind of weird little club that didn’t, like—the Eurovision that never was,” said British entry James Newman.

“Iceland had a top song and it could well have won, had the contest gone ahead. They might have had something of a global hit. That won’t be so now,” he said.

The satisfaction now is all internet-driven, and Freyr should still have lots of it.

TikTok is a far cry from 1956, when Eurovision set up the first contest in which countries from across Europe—and a few from beyond it—compete for the continent’s musical crown, seeking votes from all participating countries.

The contest started in the black-and-white era of television, in real, chandelier-hung palaces, and reflected all too long its staid origins with sugary-sweet ballads or corny upbeat songs. Meanwhile, outside its bubble, Woodstock, the Rolling Stones and The Doors were titillating the youth of yore.

Then came 1974, and with it a sea change. Almost half a century later, you may cringe at the glittery outfits if you want, but never underestimate the impact it had. The ABBA song “Waterloo” proved to be anything but a crushing defeat for the competition itself.

It launched the Swedish foursome as a superband of the seventies and allowed people to dream that at Eurovision, anything could happen.

And really it did. Somehow, it became a vector of camp and kitsch. Perhaps because acts can be expected to be in such addictively bad taste, nowadays almost 200 million viewers tune in for the finale. The concept of “guilty pleasure” could have been invented for Eurovision.

Even more surprising than ABBA’s victory, if not quite as artistic, was the win in 2006 for Lordi, a Finnish heavy metal band that will always be remembered for its monster masks and post-apocalyptic outfits.

The Eurovision contest became much more than that, though, and has become a symbol for sexual rights and, sometimes, a cesspool of politics.

It has increasingly developed a gay following, especially after the breakthrough victory of transgender Israeli singer Dana International in 1998. It also has its conservative critics, and rarely more so than when bearded Austrian drag queen Conchita Wurst won in 2014.

“There are a lot of extrovert and colorful figures that compete and that has been embraced by a part of the LGBT community. But it has been a lot more important that people like Dana International and Conchita Wurst have been able to make clear statements,” said Van de Veire.

Politics has also butted in. Sometimes the voting is perceived to push for or deny victory to certain nations, always grist for the rumor mill, but never proven.

It took a much more serious turn when Ukrainian singer Jamala won the 2016 edition with “1944,” about the deportation of Crimean Tatars under Soviet dictator Josef Stalin, which could also be interpreted as an allusion to the situation in Russia-annexed Crimea under Vladimir Putin.

There won’t be any such issues this Saturday when the Eurovision broadcast will seek to honor each and all of the competitors, and still keep a surprise element.

British entry Newman will be there—in front of his television set, in true lockdown style.

“Still going to have a Eurovision party at home—just me and my wife,” he said. CL /ra

Roy Horn of Siegfried & Roy dies from coronavirus at 75