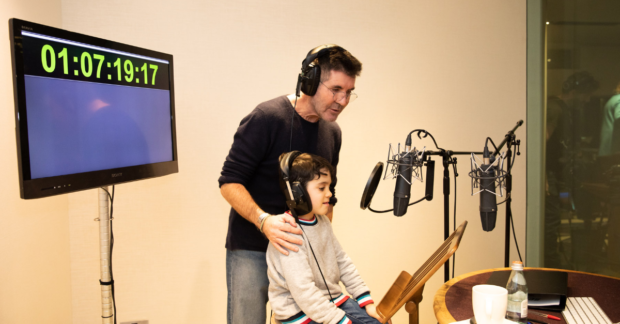 Simon Cowell will be appearing alongside his 6-year-old son, Eric, in an upcoming “Scooby-Doo” animated movie titled “Scoob!”.

The music mogul made the announcement on his Instagram page last Tuesday, May 12, alongside a still from the film. The sneak peek shows an animated version of Cowell sitting beside the fictional characters Velma Dinkey, Daphne Blake, Fred Jones, Shaggy Rogers and Scooby-Doo.

He also posted a photo of him and Eric in a recording booth. Cowell explained that he watched the animated TV series as a child and was “thrilled” to be watching it again with his son.

“So when we got asked to be in the new [Scooby-Doo] movie ‘@SCOOB!’, it was the quickest yes I’ve ever said,” he added.

Cowell also hinted at a part of the movie’s plot, saying, “We never really got to find out how Scooby and Shaggy met the rest of the gang and now we do.” While Cowell will be appearing as himself in the upcoming film, Eric will be lending his voice to a character named Ben, a young tourist in Greece.

Cowell later joked about how he felt working with his son in a report by Mirror on the same day.

“Oh, it’s a nightmare working with Eric,” Cowell was quoted as saying. “He’s so competitive.”

“He was better than me and he knows that because he had a part – so when I was terrible, he was fantastic,” he added. “But it was so much fun. I mean, really so much fun.”

Along with Cowell, the upcoming film will also star Hollywood actors Zac Efron, Amanda Seyfried, Mark Wahlberg and Gina Rodriguez. “Scoob!” will be available for streaming on services such as Apple TV, Amazon Prime Video and the Google Play Store on May 15. Ryan Arcadio /ra