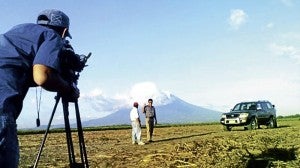 JAY ABELLO (left) shoots the docu in an abandoned sugarcane field in Negros.

Indie filmmaker Jay Abello thought he knew everything about the sugar industry in his home province of Negros Occidental. After all, he grew up in two haciendas in northern and southern Negros and worked as manager in his father’s farm for three years.

But he discovered there was more to it than met the eye when he began shooting the documentary, “Pureza: The Story of Negros Sugar.”

“The scope and the complexity of the subject matter were the biggest challenges,” he said. “The entire team had to learn the industry’s history, and that took time.”

Three years ago, a group of elderly farmers approached Abello with an idea for a documentary on the collapse of the sugar industry during the martial law years.

“They wanted to tell their story to the present generation before they died,” Abello recalled.

The director of two Cinemalaya films set in Negros (“Ligaw Liham” and “Namets!”) was initially reluctant. “I told them I wasn’t into exposés,” he recounted. “I said the industry was bigger than the Marcos era, and despite Ferdinand Marcos and [crony] Roberto Benedicto being long dead, the sugar industry has remained in bad shape.”

But one of the farmers answered that the sugar industry was “like a feather floating in the wind.  No one knows where it’s going nor where it will end up.”

Abello observed that before the premiere in Bacolod and at the Bacollywood fest last February, there was plenty of apprehension about the film.

“It was intense,” he remembered. “I work closely with NGOs, so some thought the docu would be leftist. Others worried that I would favor hacenderos because of my background.”

But aware as he was that the docu’s topic might be divisive and incendiary, he claims he took pains to be fair: “We confront the issues from every angle. We spare no one. No sugarcoating, but also no grandstanding, and certainly no unnecessary drama.”

The mood at the screenings in his hometown was “somber,” he said. “People looked sad when the film was over.”

He plans to premiere the docu in Manila in May, and hopefully show it nationwide and abroad.