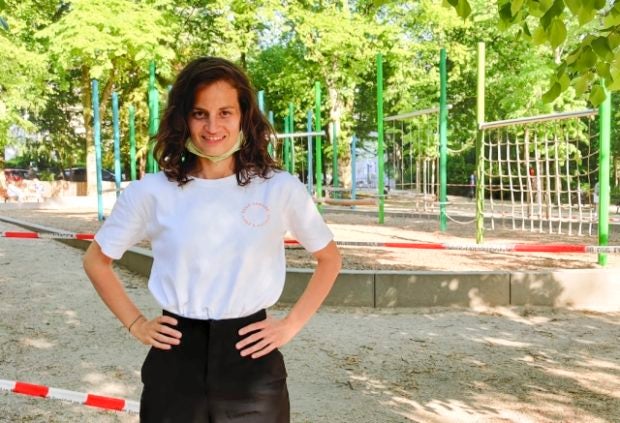 Emptied streets below Frankfurt’s towering skyscrapers, people desperate for human contact after endless video calls and lockdown enforcement mark one of the winners at this year’s Lichter film festival in Germany’s financial capital.

Last week’s regional feature film winner “Live” isn’t an up-to-the-minute documentary, but a near-future thought experiment that brewed for years in the head of director and screenwriter Lisa Charlotte Friederich.

Since the virus began taking over headlines and sweeping aside public life, “we’ve had to get used to the idea that we’ve made a film that’s very similar to what we’re all experiencing now,” Friederich tells Agence France-Presse.

The movie was in fact inspired years earlier by the wave of deadly terror attacks that swept Europe in 2015 to 2016, from Paris to Brussels and Bavaria.

Friederich and her crew imagine a world where an oppressive government has locked down all gatherings of people to minimize risk from an ideologically nebulous threat.

“For those of us who live in relative security, there’s a relationship” between dangers like terror and the virus, she explains.

Both “show us how fragile, how interconnected our world is… we have to think about how we lived before and how we will live in future.”

Ripped from the headlines

“All of a sudden everyone’s phone started ringing as word got out,” Friederich recalls from firefighters’ accounts.

Back in the real world, people have returned to Berlin’s streets, with thousands gathering on May 1 — traditionally a day of uninhibited revelry in central Kreuzberg.

Such blind defiance of authority was not on director Friederich’s mind when she made “Live”, which tells of two siblings planning illegal concerts under the noses of the authorities.

“Of course the film doesn’t want to urge people to gather in a stupid way and rebel against what’s only reasonable,” Friederich says.

Rather, “the film speaks of people’s need for community, that’s something else than conjuring up conspiracy theories” like those that have motivated some present-day demonstrators, she adds.

Throughout the film, characters are frustrated and driven apart by digital technologies’ inadequacy at replacing human contact.

“I haven’t touched anyone in forever, I don’t even know what human beings smell like anymore,” says one as he weeps under interrogation.

Another rushes to talk protagonist Claire out of her dangerous plans when a video call isn’t enough, braving an intrusive security check for a few moments of face-to-face contact.

“People miss these things very, very quickly. Having no warm body near you, ever — it’s terrible,” muses Friederich, who counts herself lucky to live with her partner and co-producer Rike Huy.

The crew was able to snatch precious footage of gapingly empty Frankfurt streets when a district of 60,000 people was evacuated in 2017 when a World War II bomb was discovered and defused.

“You never get it that way, without cars, even at night. The bomb made possible what we have all the time now,” she laughs.

‘Their hand in ours’

The Lichter film festival — where “Live” claimed top place in the regional feature film category — was held online, with limited numbers of tickets to stream films in contention.

From an artistic perspective, the film was lucky to hit festivals when it did, Friedrich believes.

“We don’t even have to stretch out our hand” to the audience, she said. “We’re all here, their hand is already in ours.”

With cinema groups reporting eager filmgoers already asking after the movie, Friederich hopes it will be easier for her to find a distributor than it is for some other directors in a time of closed theaters.

“Not many filmmakers have the good fortune that someone goes to the cinema and says, ‘I want to see this film’,” Friederich says. RGA