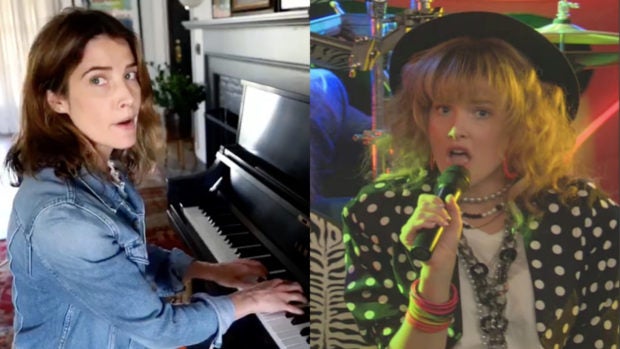 Cobie Smulders (left) as Robin Sparkles  in “How I Met Your Mother” (Image: Screengrab from Facebook/@CobieSmulders Official)

To encourage people to stay at home amid the COVID-19 pandemic, former “How I Met Your Mother” star Cobie Smulders sang a revamped version of her song from the hit TV show.

Smulders played the character of Robin Scherbatsky, a rising broadcast journalist working in New York City. Scherbatsky was later on revealed to be a former teenage pop star in Canada named “Robin Sparkles.” She had one hit single titled “Let’s Go to the Mall.”

Smulders once again gave life to Robin Sparkles’ upbeat song via her Facebook post today, May 8, with a few alterations. The actress sat on the piano to sing the song with a new title to fit the times, “Let’s All Stay at Home!”

“I hope it takes your mind off some things,” Smulders said. “It certainly did for me!”

“It was a wonderful journey down memory lane,” she added.

Retaining the playful tune of “Let’s Go to the Mall,” “Let’s All Stay at Home!” tweaked some of the song’s message to emphasize the importance of respecting COVID-19 guidelines.

“Everybody come and play/ throw every last care away,” Smulders sang. “Let’s all at stay home, today.”

Let's All Stay At Home! …Here it is! I hope it takes your mind off some things. It certainly did for me! A huge thank you to Craig Thomas and Carter Bays for the new lyrics. And to Brian Kim, who helped compose this song originally. He wrote this new piano version and then rewrote it when it was too challenging for me. It was a wonderful journey down memory lane. If you are able and willing please donate to the following charaties.Save the Children USCanadaHelpsDaily Bread Food Bank

The actress also encouraged her fans to donate to the following charities: Save the Children US, CanadaHelps and Daily Bread Food Bank.

“How I Met Your Mother” ended its almost-a-decade run in 2014 after producing nine seasons. Alongside Smulders were her co-stars Josh Radnor, Jason Segel, Alyson Hannigan and Neil Patrick Harris.

The TV show, set in 2030, is a recollection of how a young architect named Ted Mosby (Radnor) navigated through life from 2005 onwards and eventually found the love of his life.

Aside from “How I Met Your Mother,” Smulders is best known for her character Agent Maria Hill in the Marvel movies including “The Avengers” (2012), “Captain America: Winter Soldier” (2014) and “Avengers: Infinity War” (2018).  /ra

Read Next
Taylor Swift changes lyrics of ‘Reputation’ song to show ‘big isolation’ while in quarantine
EDITORS' PICK
DOH: Too early to say COVID-19 cases are declining
Acer starts the year off strong with the Aspire Vero National Geographic Edition
Duterte praises military but slams police for poor discipline, corruption
Over 3 Million worth of prizes to be won at Smart Padala’s SENDali Manalo Promo!
COVID-19 cases surging in all regions and provinces, says DOH
The best of bayside and city living at SMDC’s Sail Residences
MOST READ
PBA gets crucial call from GAB for go signal under different setup as reboot of Governors’ Cup could come earlier
Marcos Jr. visits Cebu, stands as ‘ninong’ to mayor’s son
Djokovic has to comply with rules to go to Spain, PM says
Comelec is confident candidates will join debates, says spox
Don't miss out on the latest news and information.