Hobby comes in handy for Mylene in quarantine | Inquirer Entertainment

Hobby comes in handy for Mylene in quarantine 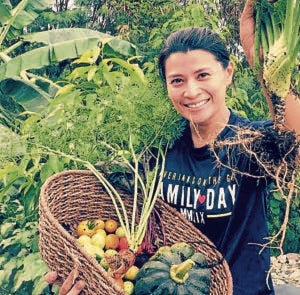 Outside of show biz, the actress has been busying herself with organic farming—an endeavor born out of her desire for “food security.”

Mylene, who lives in Silang, Cavite, maintains “a small patch of land” in her backyard, where she plants an assortment of vegetables, like lettuce, okra, eggplants and those “mentioned in the song ‘Bahay Kubo.’”

“And it’s not just for Instagram,” the actress jested. “I hope to inspire people to do the same.”

Mylene is beginning to see the fruits of her labor.

In her recent photo and video uploads on Instagram, the actress proudly showed off her yield, which included arugula, mustard, dill and butterfly pea flowers. And having her own food source surely comes in handy amid the enhanced community quarantine.

“A friend of mine who’s also into farming told me that—if you happen to have a tiny bit of land—we have to learn how to grow our own food, because that’s food security … You’ll have something to harvest,” she related.

“With what’s happening around the world, we never know,” she added. “There may come a time when vegetables are no longer as accessible.”

Her respect for farmers has only deepened since she started pursuing farming. There are a lot of challenges, as she herself has experienced—and some of them are entirely beyond anyone’s control.

In January, the ashfall from Taal Volcano’s eruption destroyed all of Mylene’s crops.

“Our house is around 25 kilometers away from the volcano, so we were affected by the eruption. An inch of ash fell in our area,” she recalled. “It wasn’t easy!”

“All the vegetables died, so I had to redo everything. I tilled the soil and fixed the layout,” said Mylene, who has always loved planting, even when she was still living in a condominium unit.

“Then, I surrounded the vegetable beds with ‘ecobricks,’ which are actually made of volcanic ash,” she added.

Making things more tedious is her commitment to organic farming.

“You have to wake up very early in the morning to check on your crops and get rid of the pests. And you have to do it one by one, because there’s no other way … I want to be as organic as possible, so I refuse to use pesticides,” she pointed out. But every day is a learning experience.

“You learn a lot of things, like companion farming; you figure out what plants should go beside what. You learn that it’s better to put bitter gourd beside tomatoes, because the pests that thrive on one vegetable hate the other,” she said.

“And you can’t just plant and plant. You have to let the earth breathe, too,” she added.

Mylene has yet to reach the point where she no longer needs to buy vegetables. But that’s the goal. And, who knows, maybe she could one day turn it into a business.

“I would love to do that, if I can. We will see. But it would be nice to supply vegetables to some far-flung areas that aren’t able to produce enough vegetables. Why not? But I’m still studying,” she said.

“For now, I just want to inspire others, tell them that everyone can grow anything,” she added.—Allan Policarpio INQ