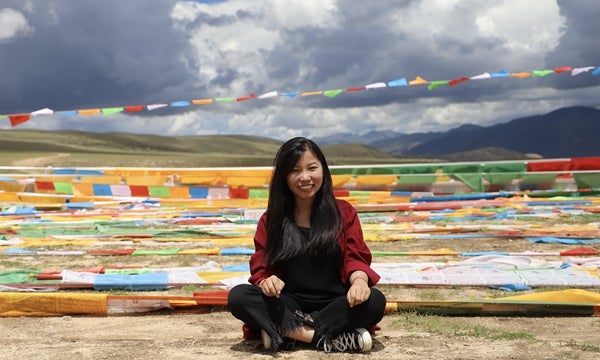 Tsering Choekyi, a senior student at Tsinghua University, is making a documentary about Tibetan blind masseur Tsering Dhondup and his colleagues. [Photo provided to China Daily]

BEIJING — In the documentary Land of Silence and Darkness, German director Werner Herzog portrays the life of disabled people by focusing on a deaf and blind woman. His care for the woman and their communication deeply touched Tsering Choekyi, a 23-year-old girl from Shannan city, Southwest China’s Tibet autonomous region.

When the journalism major from Tsinghua University saw a public service advertisement on Tibet Satellite TV, she was attracted by the story of Tsering Dhondup, a blind masseur who dreams of organizing a band with six of his peers and decided to film a documentary about Tsering Dhondup and his colleagues as her graduation project.

“I want to make this documentary to improve the visual representation of the disabled in Tibet and enable them to reveal to the general public a side of their lives rarely seen. On the other hand, I also hope it will encourage more people to pay attention to the disabled, especially when it comes to their employment.”

She set about searching for information online about Tsering Dhondup before going directly to his massage shop in Lhasa, to request an opportunity to record their daily life.

“I was very tense and anxious before I met them, since I was worried they would be very sensitive, but to my surprise, they immediately agreed and said they felt happy to help me. I was really moved,” Tsering Choekyi tells China Daily.

Due to the coronavirus pandemic, she postponed filming until March 5, but has visited the massage shop nearly every day since. So far, under the simple working title of Tsering Dhondup, she has half of the footage she wants “in the can”, and plans to edit the documentary in May.

“I follow a relatively fixed schedule. They live on the third floor and work on the second in a house on Bakuo Street in Lhasa. I usually go to the second floor in the morning and chat with them for a while before shooting. I record how they work, how they practice their massage skills, how they get on with each other and how they play the instruments and sing together.”

Tsering Choekyi originally wanted to center on Tsering Dhondup and his colleagues’ band, but due to the pandemic, some of the band members are staying at home, and they cannot give performances now, so she adjusted her focus on the massage business.

In the beginning, Tsering Dhondup and his colleagues were not very accustomed to the camera and asked Tsering Choekyi if they should say something or wear uniforms when working, but they soon acclimatized to it and began behaving naturally. 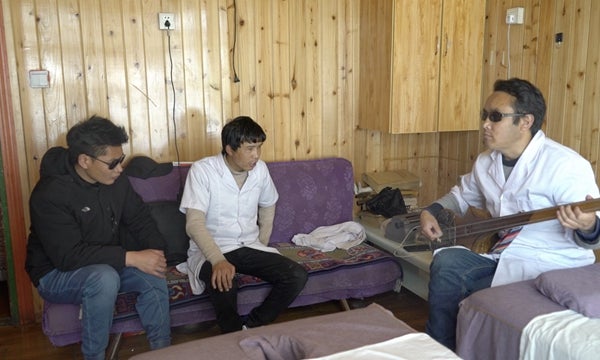 Tsering Choekyi was impressed by Tashi, a 22-year-old who was born blind. He is, surprisingly, still a high school student and works in the massage shop in his spare time. Over the years Tashi’s eyesight has improved and he can see some colors. Tsering Choekyi asks about his impression of the world, and he replies “blue sky and white clouds”.

“We can see blue sky and white clouds often, and regard them as normal, but for Tashi, they are how he views the whole world,” says Tsering Choekyi.

She also discovered that the lives of the blind are not as different from those of sighted people as she imagined.

“I used to imagine their life would be very inconvenient, and I was afraid that talking with them about their blindness may hurt their feelings. However, everything is OK, they are not so sensitive. They live just like ordinary people, and their positiveness touched me a lot.”

During filming, Tsering Choekyi discovered that, since many parents of the disabled in Tibet are poorly educated, they don’t tend to encourage their children to attend school or find work outside their community.

“For example, Tashi is of similar age to me, but I’m going to graduate from university, while he is still attending high school, because he didn’t start attending school until he was 14. Before that, he just stayed at home doing chores like feeding the livestock. Even after he learned braille at school, his parents didn’t understand the need to learn it.”

The masseurs all consider themselves lucky, since they don’t live at home and can support themselves through their own efforts.

Tsering Choekyi says the final documentary will be submitted in June for graduation. Already enrolled as a postgraduate at Tsinghua University, she will continue to pursue her master’s degree in journalism.

She has made short documentaries about an animal photographer, a carving craftsman and an old Japanese woman who runs a restaurant in China. It is her first time shooting a long-format documentary about people in Tibet.

“Many people say documentaries only show problems, but don’t provide a solution, and that, sometimes, they simply exploit the disadvantaged. I don’t want to do that,” says Tsering Choekyi.