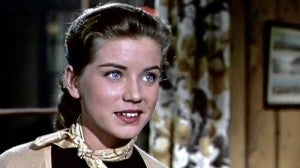 HART. From actress to nun.

OUR notes on Dolores Hart’s “comeback” at the recent Oscar awards rites has elicited requests for more information on the dramatic story of the lovely film star-turned-nun. Happy to oblige:

Hart was active as an actress from 1947 to 1963. The daughter of divorced parents, she converted to Catholicism when she was 10 years old. In 1956, the fresh-faced beauty played the love interest of Elvis Presley in “Loving You.” She made two more movies before acting with the screen heartthrob again in “King Creole.”

Presley was clearly smitten, but no real sparks flew between them, and Dolores went on to act on Broadway in “The Pleasure of His Company.” She did so well that she was nominated for a Tony and won a Theater World award for her performance.

Later, she starred in movies like “Where The Boys Are” and “Come Fly With Me,” and filmed “Francis of Assisi” in Rome, where she met Pope John XXIII—who turned out to be instrumental in firming up her religious vocation! In 1970, she took her final vows as Sister Dolores.

Forty years later, she visited Hollywood again to raise awareness for peripheral idiopathic neuropathy disorder, a painful and crippling neurological disorder that affects many people, including herself.

Sister Dolores was instrumental in developing her Abbey’s project of community connection through the arts, which includes a year-round arts school. Celebrities like Paul Newman and Patricia Neal have helped fund the worthy project. The Reverend Mother Dolores Hart has been Prioress of the Abbey since 2001, but she has remained a member of the Academy of Motion Picture Arts and Sciences.

A documentary about Hart’s life, “God Is the Bigger Elvis,” was nominated as Best Documentary (Short Subject) in the recent Academy Awards, and she attended the glittering event, generating a lot of buzz for her nominated movie. (Her last red-carpet Oscar event was in 1959, as a Hollywood starlet.) 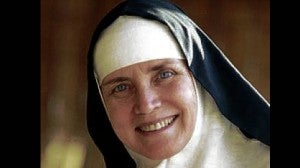 HART. From actress to nun.

Another “oldie but goldie” star who’s still hitting the headlines is former “The Golden Girls” sitcom sensation, Betty White, who’s now in her 90s, but obviously has no plans to slow down. She’s still making movies, and her new sitcom is generating good viewership, so don’t count her out just yet.

Will she become the first working star to hit 100, after the similarly peppy and irrascible George Burns? She certainly intends to give it her best shot!