MANILA, Philippines—Singer and theater actress Bituin Escalante has opted to shave her head for a “low maintenance” look as salons and barbershops remain closed amid the pandemic-induced quarantine.

Escalante took to Instagram on Monday to show off her new look, which earned the praise of fans and other celebrities alike.

Other singers and actors such as Jim Paredes, Regine Velasquez, Rachel Alejandro, Cherry Pie Picache, Sue Ramirez and Katrina Velarde liked Escalante’s photo, which has garnered more than 1,000 likes, as of writing.

Ramirez also commented that she is jealous of Escalante’s look, who then encouraged the former to shave her head as well with a simple “tara na (let’s go)!” 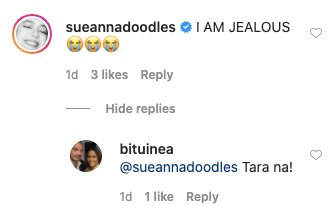 Velarde meanwhile left a simple “Yaaas” accompanied by heart emojis to show her admiration for the singer’s new look.

Netizens meanwhile labeled Escalante’s new look as “perfect for the summer,” “fierce” and “bold,” among other things.

Escalante is known for hit songs such as “Kung Ako na Lang Sana,” “Always Somewhere” and “The Only Two People In The World.”