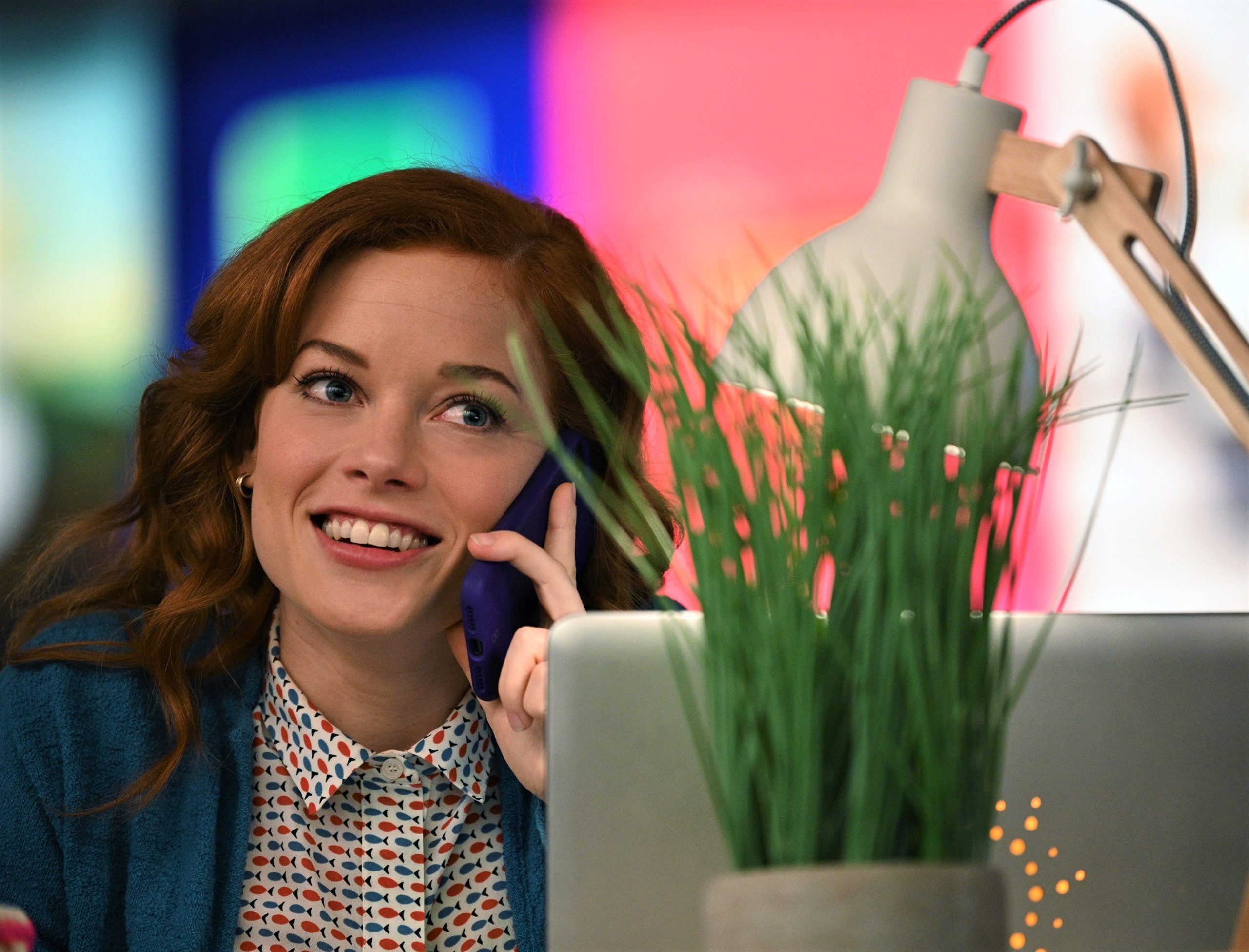 LOS ANGELES—What if you suddenly have the ability to hear the thoughts of people around you as songs and fullblown musical numbers?

That is the premise of Jane Levy’s new series, “Zoey’s Extraordinary Playlist,” which should appeal to music loving viewers, especially Filipinos who like to tout the soundtrack of their lives.

In the NBC series created by Austin Winsberg, Jane’s title character was having an MRI, which was made a bit more pleasant by having music played during the procedure. An earthquake—the setting is San Francisco—happens and overloads the MRI system.

When Jane’s Zoey steps out, lo and behold, she can hear people’s innermost thoughts, in songs as in The Beatles’ “Help!” Zoey’s sudden musical tele­pathy makes her empathic to people around her, including her dad (Peter Gallagher), who is suffering from a rare neurological disorder that makes him unable to speak, mom (Mary Steenburgen), boss (Lauren Graham) and a sassy gender nonconforming gay neighbor (a terrific Alex Newell).

Zoey’s life becomes one big musical since she can hear people’s fears, longings, desires and fantasies as songs from “Lean on Me” to “I Think I Love You.”

We asked Jane, who starred in such shows as “Suburgatory,” “Evil Dead” and “Don’t Breathe,” what songs could be playing in her mind as we spoke to her via video conference. 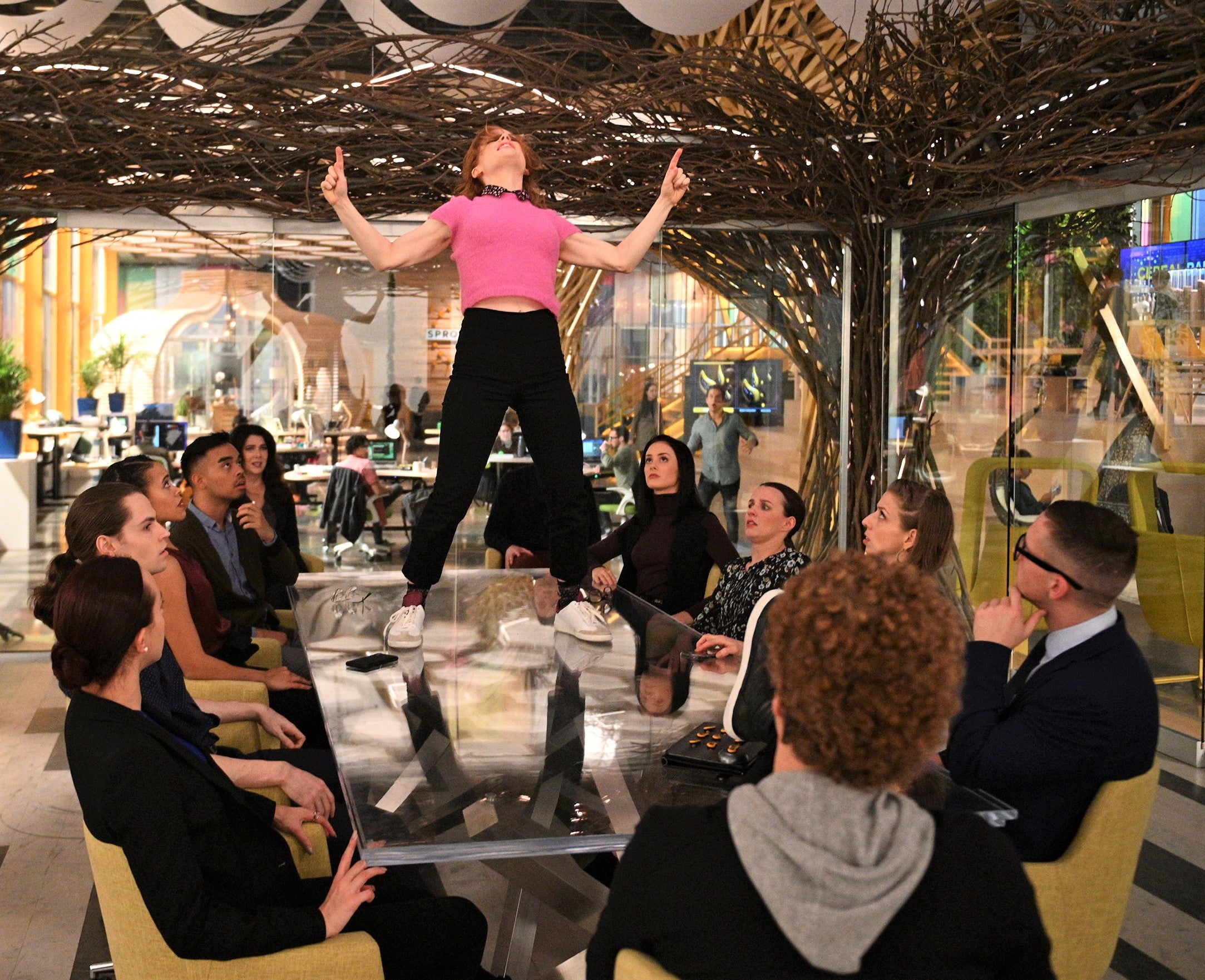 “Oh boy!” exclaimed the LA native who was raised in Northern California. “What is that song that is like (sings), ‘And I say, hey, hey, hey/I said, hey what’s going on?’ (‘What’s Up’ by 4 Non Blondes). I feel like (sings), ‘Hey, what is going on (laughs)?’ Also, Natalie Imbruglia’s song, ‘Generous.’ (Sings) “I want to thank you, thank you, thank you…” And any song to get me out of this goddamned house (laughs).”

Everyone in the cast uses his real singing voice. We were pleasantly surprised to discover that Peter can sing. For Jane, she was awed most when she heard Alex sing. “He is one of the best singers I have ever heard in my life. When he sang ‘This Little Light of Mine,’ a gospel number in Episode 4, my jaw dropped.

“Also, he sang in the last epi­sode ‘The Troubles with Love Is’ by Kelly Clarkson. It’s hard to explain the experience you feel, the sensation on your body, when somebody sings that well. But Alex does it for me, that’s for sure.”

Playing a coder who gets promoted in a San Francisco tech company, Jane figures in a love triangle with two cowor­kers, Sam (Skylar Astin) and Simon (John Clarence Stewart). Both Skylar and John are fine singers.

“I was talking to one of my friends this morning about John’s voice, and there’s a particular tonality that is so beautiful,” Jane said. “It’s been fun. I actually know John. We worked on a TV show together two years ago called ‘What/If’ on Netflix and now, we get to work together again.

“Skylar is, as you could probably imagine, a fun person to work with. I’m friends with both of them. When we shoot, it’s great. But I love hearing the response because people take sides very seriously. I can’t tell you whether I am Team Simon or Team Max.” 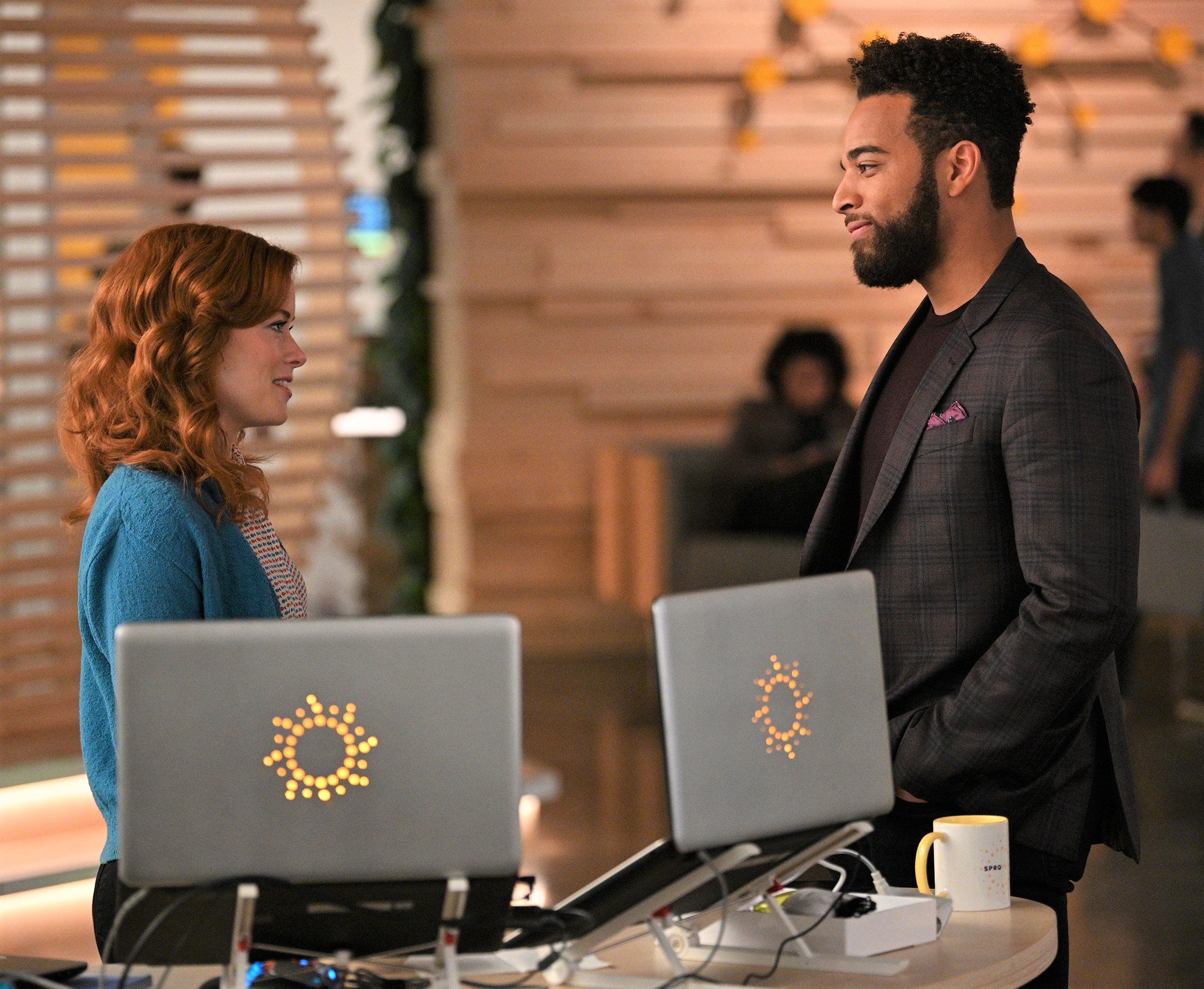 John Clarence Stewart (right) costars with Levy in the series.

We’ve seen Skylar in the “Pitch Perfect” movies and in the series, “Crazy Ex-Girlfriend.” Jane filled us in on John: “He is from Georgia. John spent a lot of his acting career doing regional theater. Then, he moved to New York and has been working pretty steadily since then. When we were cas­ting the role of Simon and we couldn’t find an actor for that part, I actually suggested John because I loved working with him on ‘What/If.’

“John came in, and we tes­ted together for the role. He knocked it out of the park. People were crying at his audition. I’m really proud of him and happy for him.”

Jane herself is the worthy anchor of the series, with her engaging presence and considerable singing and dancing talents as well. “I don’t sing as much as I dance,” she declared. “At home, I’m constantly dan­cing. But you would find me bursting into song in the sho­wer, in the kitchen while washing dishes and hanging my clothes out to dry in my backyard.”

On her musical aptitude in real life, Jane laughed as she admitted, “I love music, but I’m not somebody who has a great knowledge of all the different artists across time. I’m not a trained singer or dancer, so this world was new for me. I like Zoey in the way that she is (laughs). One day, I asked who the lead singer of Bon Jovi is (laughs), which is a very Zoey-esque question.”

The show demands a lot of stamina from her since she’s in almost every scene. “This is the hardest job I’ve ever done because it’s not just acting. It’s also singing, dancing, with not just drama, but also comedy. Every single musical number comes out of my character’s brain.”

Zoey’s concern for her dad who can only communicate by typing short phrases on a computer provides the show’s emotional core. “The heart of this show is Zoey’s relationship with her father,” Jane stressed. “When I was working on this character, I began to realize how her getting this supernatural gift is not unrelated to what’s going on with her father.”

Asked if Zoey’s superpower is a gift or a curse if she has it in real life, Jane quickly answered, “I’d absolutely see it as a curse. People should be able to have diaries that nobody reads or thoughts in their own brain that nobody should know. There is a reason. I’m sensitive and I don’t think I would be able to handle it. 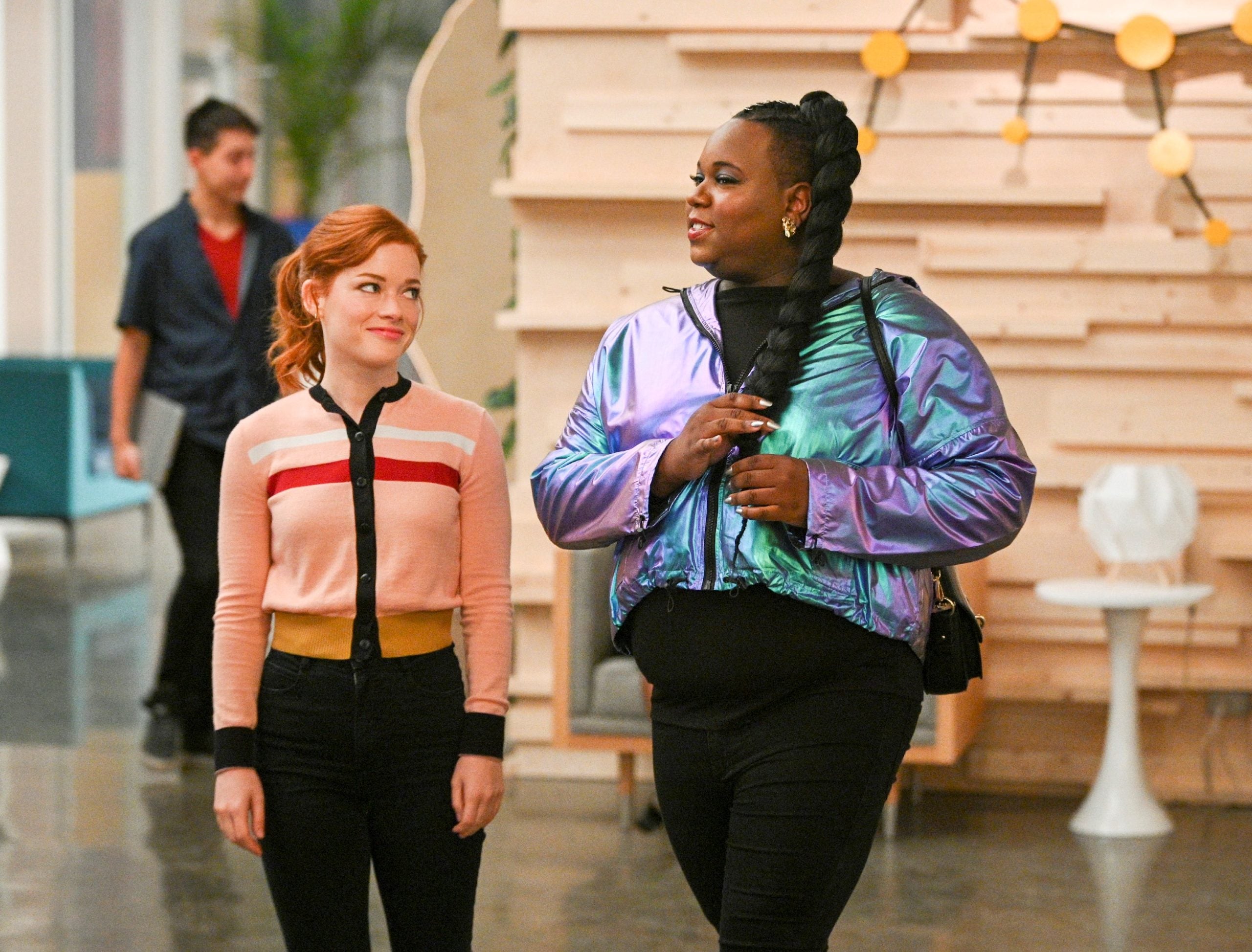 “He is one of the best singers I have ever heard in my life,” raved Levy (left) about costar Alex Newell

“We watch Zoey struggle with it being a blessing and a curse. I think ultimately, it’s a blessing because she can communicate with her father, which is the most important relationship to her. But would you want this power?”

The 30-year-old shoots the series in LA, where she lives with her boyfriend. On relationships, she shared, “I got married (actor James Freitas) when I was so young, and it lasted six months. I have been with my current boyfriend (actor Tho­mas McDonell) for nine years. So, my current relationship feels a lot more like a marriage than with the man I married when I was 20.”

If the show gets a second season, how would she like Zoey’s journey to continue? “I don’t want to give away how Season One ends, but I feel like Zoey’s journey in the first season is very solo,” Jane remarked. “Maybe in Season Two, she can be open to more collaborative efforts and going through something with others.”

“Zoey’s Extraordinary Playlist” has been drawing such emotional responses from viewers, in these pandemic times. “I’m not totally surprised by it, only because when we were crafting it, we took it really seriously,” Jane said. “Mandy [Moore], our choreographer, Austin [Winsberg] our creator and I did put our heart into it. There were many times when we would finish a number or a scene and the crew members would be crying.

“It’s also about the music which goes directly to our hearts in ways that a normal scene doesn’t if we process it cerebrally. With music, you feel it a lot more. I’m not necessarily surprised, but I am very moved by the response. That is why we make a show like this—it’s for the audience.

“I feel like I’m having a shared experience with the people who I am communica­ting with on Twitter because I, too, have a very emotional experience making the show. Then it’s personal for me and it’s personal for them, as well. It is heartening and gratifying to hear that this show is offering people joy, entertainment and escapism right now.”