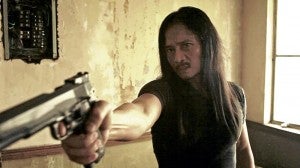 Unassuming Leon Miguel is quick to describe himself as an “underdog.” But this unsung actor is much in demand for international films.

He may not be a familiar name among Filipinos, but Miguel has appeared in American, Japanese, Italian, and British films, sharing the screen with the likes of David Hasselhoff (“Legacy”), Dean Cain (“Subject I Love You”), Hiroyuki Sanada (“Emergency Call”), and Satoshi Tsumabuki (“Pandemic: Kansen Retto”), among others.

Miguel’s star finally gets to shine in his latest film, Ron Morales’ “Graceland,” which premieres today (Manila time) at the Tribeca Film Festival in New York, which runs until April 29. (“Graceland” is one of three Filipino films in the fest, along with Miguel Calayan’s short, “Prima,” and Ramona Diaz’s documentary, “Don’t Stop Believin’: Everyman’s Journey.”)

In an interview with Inquirer Entertainment on the eve of his flight to the US, Miguel said that being invited to Tribeca is a “dream come true.” He is thankful to Morales, his Filipino-American director, for guiding him. “He is passionate and trusts his cast and crew completely,” Miguel said.

Tribeca is a fitting reward for Miguel, who has been acting since 1994, when he made his debut as a Katipunero in Lupita Aquino-Kashiwahara’s TV series “Bisperas ng Kasaysayan.”

Before show biz, he worked as a civil engineer. But after the acting bug bit, he was hooked. “I was aware of the sacrifices involved, but I was ready,” he said.

His interaction with ordinary folk, he explained, serves as research for his movie and TV roles. A graduate of the Actors Workshop Foundation, Miguel said that he strives con-stantly to achieve realism in his performances.

He is often cast as kidnapper (“Graceland’), gangster, thief, guerilla, rebel and murderer. He has played an Abu Sayyaf bandit a number of times, notably in Brillante Mendoza’s “Captive” and Sigfried Barros-Sanchez’s “Tsardyer.”

But Miguel is not worried about being typecast. “I make sure that even if I play a criminal, I still show the human side,” he said. “I want the audience to understand why a person turns to crime.”

In “Metro Manila,” which is directed by British director Sean Ellis (Oscar nominee for best short for “Cashback”), Miguel plays a bank robber and vicious killer. “One scene was repeated 50 times. (Lead star) John Arcilla was drained. Sean is meticulous,” he recounted.

Miguel has been in a number of international projects: portraying an Indonesian (“In the Name of the Queen”), a Vietnamese (“Behind Enemy Lines”), a Cambodian (“Legacy”), and a Thai (“Shattered Dreams”), among others.

He recently played a pre-Hispanic warrior in the GMA 7 primetime series “Amaya.” Miguel was the only actor who didn’t have to wear a wig, since he has long hair. He recounted that the show’s star, Marian Rivera, was a joy and gifted him with an organizer last Christmas.

Miguel generally has pleasant encounters with the big stars he has worked with. In “Legacy,” Hasselhoff “sang and danced with me between takes.”

In “Emergency Call,” Sanada—who also starred in “Ring” and “The Last Samurai”—was “intimidating at first, but friendly.”

In “Pandemic,” Miguel got carried away in a fight scene with Tsumabuki, a Japanese pop star who appeared in “The Fast and the Furious: Tokyo Drift.” Said Miguel: “Satoshi’s handler told me to go easy because I might hurt the star, but Satoshi himself said that he was fine and that my intense acting helped him get into character.”