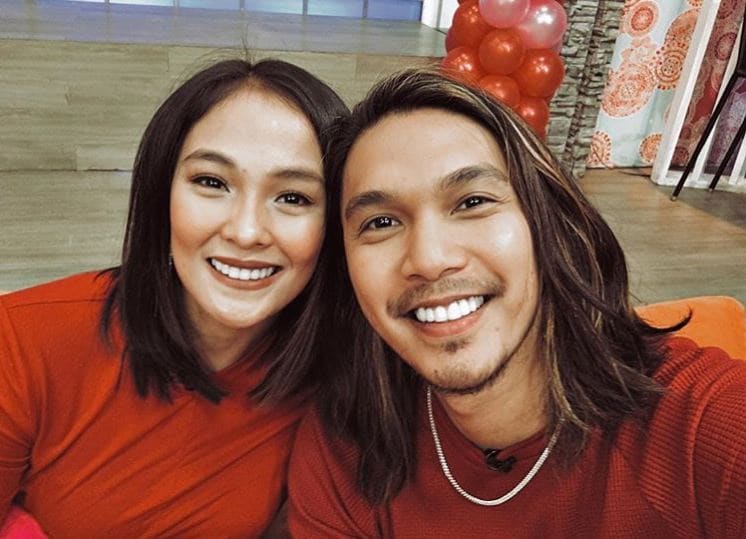 It was the longest 30 seconds of his life.

In the lull between him popping “the question” and his girlfriend, Lovely Abella, giving an answer, Benj Manalo thought he was going to get turned down.

“I was afraid she wasn’t going to say yes, because it was taking her so long to reply. And the whole time I was like, ‘Please say something, please say something!’” said Benj, reminiscing about his marriage proposal to Lovely in a pocket interview, after his contract signing with Viva Artists Agency.

The actor-dancer initially hoped to put a ring on Lovely in time for their house blessing that he had planned last year. However, things didn’t go as he had intended.

“It took a year of preparation, but it still fell through. Lovely was then returning home from Hong Kong, where she shot the movie ‘Hello, Love, Goodbye.’ I asked her siblings from Canada to fly to Manila so that members of her family could be witnesses. But Lovely didn’t want to have our house blessed until she felt everything was in place,” he recalled.

“So it got postponed and postponed until her siblings had to return to Canada,” Benj added. “So I had no choice but to come up with another plan.”

What Benj did, instead, was gather some of Lovely’s friends and loved ones, and have them join the filming of his single’s music video. “They agreed to be extras in the video. They were all supportive. I thanked everyone after the shoot, then I finally proposed,” he said.

Though Lovely—a GMA 7 talent and a “Bubble Gang” mainstay—had already been dropping hints about what she wanted to do in their future together, Benj said it still caught his fiancée by surprise. “I wanted us to be engaged before moving into our new home. I wanted to give her the security that I’m here to stay,” he said.

The show biz couple, who has been dating since 2015, plans to tie the knot in January next year. “We want it to be something intimate. A small gathering will do,” he said.

The two have respective children from previous relationships: Benj has a 13-year-old son, Nathan; Lovely has a 12-year-old daughter, Crisha.

“Now that we already have a house, we want to start a family together—that’s the plan,” said Benj, who has found the perfect “companion in life” in Lovely.

“We understand each other, especially when it comes to our plans for the future. We clicked, so we decided to stay together and work on our relationship,” he related.

Benj’s notable projects on television include “On the Wings of Love,” “Ang Probinsyano” and “Kadenang Ginto.” He’s also set to appear in Julia Montes’ comeback soap, “24/7.”

“Now that I’m with Viva, I would like to expand my range as an artist. I want to do more films and music. I want to be able to create and produce my own projects,” said Benj, who used to be part of the acclaimed dance troupe, Philippine All-Stars.

Benj can proudly say that he has managed to build a show biz career with little to no assistance from his father, comedian Jose Manalo. “Our unspoken rule is that we would have to do things on our own,” related the 32-year-old artist said. “And there’s a sense of accomplishment that I didn’t have to rely on his name.”