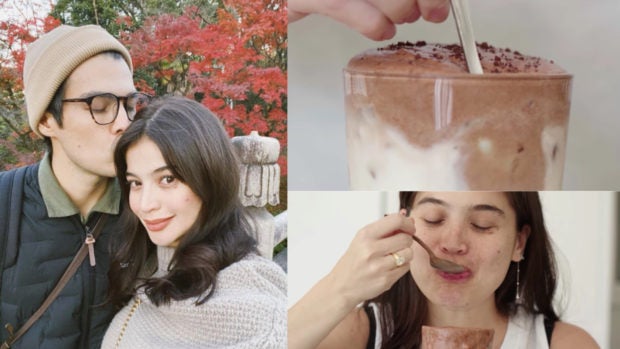 Following the Dalgona coffee craze making its rounds in the internet, celebrity chef and vlogger Erwan Heussaff took on the challenge to recreate the drink, named after the popular Korean candy. He even added two extra recipes on his latest video, via his YouTube channel last Saturday, March 28.

Heussaff was assisted by his wife, actress Anne Curtis, who he announced will be his newly hired hand model in his following vlogs. Aside from the standard Dalgona coffee recipe, Heussaff tested chocolate as a primary ingredient for his spin-off Dalgona chocolate drink, which he claimed earned Curtis’ stamp of approval.

Heussaff also created a Vietnamese egg yolk coffee drink. He cited that the classic Vietnamese beverage  is “probably the grandfather of Dalgona coffee.”

The chocolate Dalgona recipe took several attempts for Heussaff to perfect in his video. He narrated that when he tried creating it using the same process as the coffee version, the mix would not thicken. To remedy this, he added cream to his Milo syrup which consists of two tablespoons of hot water, two tablespoons of the chocolate drink powder and one tablespoon of sugar. He then mixed the ingredients together until he got his desired consistency and placed it on top of a glass of milk with ice.

For his last recipe, Heussaff pasteurized two eggs by boiling it in a pot for three minutes under 140 degrees Fahrenheit (60 degrees Celsius). He also cautioned that the temperature must not go above that limit or else the egg might start to cook. He then blanched the eggs in ice-cold water to stop them from cooking.

Heussaff separated the egg yolks and added one half cup of condensed milk before whisking them together. He whisked the mixture until it was frothy enough to float in the drink. Once it was ready, he added it on top of a glass of brewed coffee with some ice.

Before preparing the drinks, the chef revealed that he is currently in Australia and unable to return to the Philippines because of the quarantine imposed, due to the COVID-19 pandemic. He also stated that he will be shooting his next few vlogs by himself with limited equipment which will make his videos different from his usual set up.

Earlier this month, Heussaff and Curtis welcomed their daughter Dahlia Amélie who was born in Australia on March 2. JB