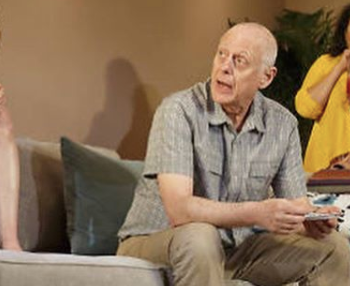 Actor Mark Blum appeared in shows including “Rancho Viejo,” “After the Revolution,” “Little Footsteps” and “Gus and Al.” Image: Courtesy of Playwrights Horizons via Instagram/@phnyc

Actor Mark Blum, who appeared in such films as “Crocodile Dundee” and “Desperately Seeking Susan” and on television shows including “Mozart in the Jungle,” has died of COVID-19 complications. He was 69.

His death was announced by the Off Broadway theater company Playwrights Horizons. SAG-AFTRA confirmed the news (via Deadline).

In addition to his wife of 15 years, survivors include his mother, Lorraine, and sister, Nancy.

A veteran New York stage actor, Blum had most recently played bookstore owner Mr. Mooney on the Netflix crime drama “You”—but his resumé and screen credits were extensive and also included roles and guest spots in TV shows such as: “St. Elsewhere,” “Frasier,” “The Sopranos,” “The West Wing,” “Law & Order,” “The Good Wife,” “The Good Fight,” “The Blacklist” and “Elementary.”

He also worked dozens of times off-Broadway, including in Kenneth Lonergan’s “The Waverly Gallery,” Terrence McNally’s “It’s Only a Play,” Amy Herzog’s “After the Revolution,” Craig Lucas’ “The Singing Forest” and Zoe Kazan’s “We Live Here”; and won an Obie Award in 1989 for his co-starring turn in Albert Innaurato’s “Gus and Al” at Playwrights Horizons. IB /ra

Sharon Cuneta remembers Gabby Concepcion’s mom: ‘Thank you for being good to me’