MANILA, Philippines — Tributes to esteemed actor and thespian Menggie Cobarrubias poured in on social media after confirmation of his death came Thursday morning.

Cobarrubias, 66, died of complications due to pneumonia as he waited the results of his coronavirus disease (COVID-19) test.

His co-stars onscreen and onstage shared heartfelt tributes about him, remembering him not only as a talented character actor but also for the bonds he formed during his career.

Actress Janine Gutierrez, who starred alongside him in the teleserye “Legally Blind,” said on Twitter: “Rest in peace Tito Menggie. A talented, generous, charming actor. Thank you for all you shared with us.”

Rest in peace Tito Menggie. A talented, generous, charming actor. Thank you for all you shared with us 🙏🏼 Praying for your family and everyone else who has lost someone during these difficult times. pic.twitter.com/sQwKBbvS6O

One of his last TV projects was “Make It With You”, and actress Liza Soberano recalled one of their final moments on set. 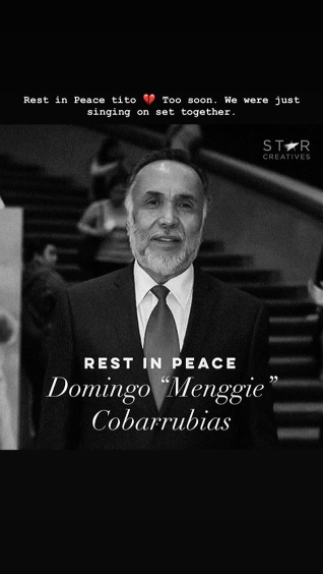 “Rest in Peace tito. Too soon. We were just singing on set together,” she wrote on her Instagram story.

Actress Frances Makil Ignacio recalled on Facebook fond memories of him while they were in Dulaang UP’s “Ang Tagak” and when she saw him at the funeral of another late great actor, Tony Mabesa.

Paalam aking Trigorin. So many memories of Ang Tagak come flooding back. From your adamantly not looking me in the eye…

“I will remember you for the laughter we all had doing theatre (that we all love). I can smile with these memories Menggs. Thank you. Go with God.”

Theater star Stella Cañete-Mendoza also remembered him for his humor.

(I will miss all your antics my beloved Tito Menggie!!! I cannot say, ‘you left without saying goodbye,’ because you did. You knew God was calling you. Go ahead and rest. It is already chaotic in this world; it is certainly more peaceful in heaven.)

Filmmaker Jomar Quintos appreciated his kindness. “I remember him as a joker and a hero who always [changed] the ambiance of the set [every time] I will be scolded by Direk Gil for being a novice assistant director. Tito Menggie Cobarrubias, you’re a good character actor & a kind soul. It pains me to know about your demise. Sleep well!”

I remember him as a joker and a hero who always change the ambiance of the set everytime I will be scolded by Direk Gil for being a novice assistant director. Tito Menggie Cobarrubias, you’re a good character actor & a kind soul. It pains me to know about your demise. Sleep well! pic.twitter.com/sKmS83agUl

Goodbye, Sir Menggie Cobarrubias. RIP.
The film industry is mourning the loss of one of our finest veteran actors.

Cobarrubias began growing his career in the 1970s  with films that garnered controversy because of their sociopolitical messages during the martial law era. These were “Sakada,” which shed light on the plight of sugar cane farmers in Negros, and “Hubad na Bayani,” which depicted a peasant revolt.

He also had the opportunity to work with renowned film director Lino Brocka in “Jaguar” in 1979 where he landed a Gawad Urian award.

Cobarrubias eventually landed mainstream roles on TV. His last projects include this year’s “Make It With You” and 2019’s “The Killer Bride.” Cobarrubias also lent his talents to award-winning indie films such as “Signal Rock” and “Kung Paano Hinihintay ang Dapithapon.”