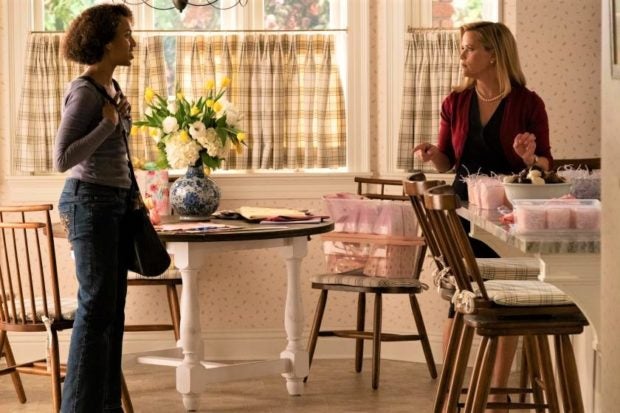 LOS ANGELES—“She basically thinks about other ways for me to be evil.”

Reese Witherspoon, turning to Kerry Washington, smiled as she teased her “Little Fires Everywhere” costar on how they help each other in their scenes together. Kerry laughed.

“Kerry is like, you have got to be really evil, which is fun,” Reese added. “When you are working with an actress of this caliber and you’re getting to use her brain as well, it is really fun.”

In these self-isolation times, Hulu’s adaptation of Celeste Ng’s popular novel is high-end soapy entertainment, giving home-confined viewers a treat as the two fine actresses go toe-to-toe in their many scenes together.

“The first day we filmed together was the day that I came to look at the apartment that she owns, that my character was wanting to rent,” Kerry said about relishing their roles. She plays Mia Warren, an artist who gets by as a part-time waitress, while Reese is Elena Richardson, a wealthy woman whose life is seemingly perfect. Until Mia arrives in Shaker Heights, Elena’s affluent town in Ohio.

“It was such a perfect first scene, because our characters were checking each other out, but Reese and I, although we have been friends for a long time, we were kind of checking out each other’s acting process, as well,” Kerry shared.

Here’s the continuation of our chat with Reese (R) and Kerry (K):

How did your friendship come into play in coming out with a show about women?

K: First of all, the existence of the show speaks to the power of female friendship in the real world, in Hollywood. Like there’s no way that either of us could be telling the story from our singular perspectives.

This project, almost more than anything else that I’ve ever done, has been so much about people courageously sharing theirs point of view, their inner world, in order to tell that story together. So, it’s been so exciting for us in the writers’ room, in producing and even in the editing. It’s just been so personal, intimate and filled with that female partnership/friendship thing.

R: And learning. It’s 1997, so Kerry and I figured out early on that we are basically playing our mothers.

And that is profound. You think about, how did my mother answer some of these questions about class or race, who were her friends, and who did we hang out with? What felt appropriate and not appropriate, what was the language around race, things that we used to say.

Our friendship is a safe place to have those conversations. We also have deep respect for each other as artists and creators, that we’re going to hold hands, learn and put art into the world that maybe pushes people’s buttons a little bit.

What do you think about playing moms at this stage in your life and career?

K: Reese and I were talking about how, early in our careers, we were both told that it was the kiss of death to play a mother. That once you play a mom, you’re no longer the ingénue. I can’t imagine the loss of depth in work if I refused to allow myself to be a mother.

So, I love that we’re actually at a time when we can still be successful actresses who are still allowed to be on the covers of magazines, have thriving careers, and also tell stories about motherhood because it’s such an important part of our identity and storytelling.

Do you think actresses are still being advised against playing mothers?

R: It was definitely advice from people who were advising me on my career. I don’t know what they tell people nowadays. I have no idea.

Did you already have kids at the time?

R: I already had kids. By the time I was 36, I had three kids. Maybe, it was a real fallow period for me as an artist. I couldn’t figure out what I wanted to do. There wasn’t a lot of opportunity to make movies. I would go to studios and they’d say, we are making one movie with a woman this year and we’ve already made it. I am not kidding.

R: And I was a white woman and those opportunities were very limited. That’s why I started my own company that I funded by myself because I said, this institution wasn’t made to include me. I have to build something outside of it in order to tell stories I wanted to tell, and encourage other people to tell the stories that I wanted to tell. Because they do not exist under the umbrella of one particular studio. There’s just not a breadth of storytelling there.

K: That’s one of the reasons why this project has been so exciting and magical for all of us because again, there’s a monolith of what motherhood looks like. It’s this one color with a paintbrush that we have decided, that’s now a mother. There is, instead, this huge exploration.

Having a mother is the one thing that we all have in common, whether we know her, we love her, we don’t get along with her. We all come from this lady. Exploring the complexity of that relationship, being able to unpack, flip it over and dive into it from these different perspectives has been so thrilling for us.

You both exude confidence. Is there something that you want to improve about yourself?

K: There are always things I’m working on about myself. If we had more time, I could invite my therapist to share some of them with you (laughs). There’s a long list.

One of the reasons why I love working with Reese is because I actually don’t feel like I have to pretend to be perfect with her. Because she, allow me to say it, is very accepting of my humanness.

We are both just women in process and trying to balance all of our various hats as actor, producer, mother, wife, entrepreneur and activist.

R: We are being ourselves, but … with a lot of help (laughs).

I remember being little and watching my mom being really critical of herself. I remember to this day, her staring in the mirror, crying and saying she didn’t feel like she was skinny enough or pretty enough.

I thought to myself, my mom is so beautiful, amazing, why would she say those things about herself? I was 9, and I made a vow to myself that I would try not to have a negative self-talk ever.

I carried that with me for a long time. It creeps in for sure, but with my positive thinking, I have to tell that positive voice to be louder. Because I saw what it did to my mom and it was painful. So I work on that a lot.

On a humorous note, when are you playing grandmas?