NEW YORK  — U.S. movie theaters have closed nationwide due to the coronavirus pandemic, turning dark nearly all of the country’s 40,000-plus screens in an unprecedented shutdown. 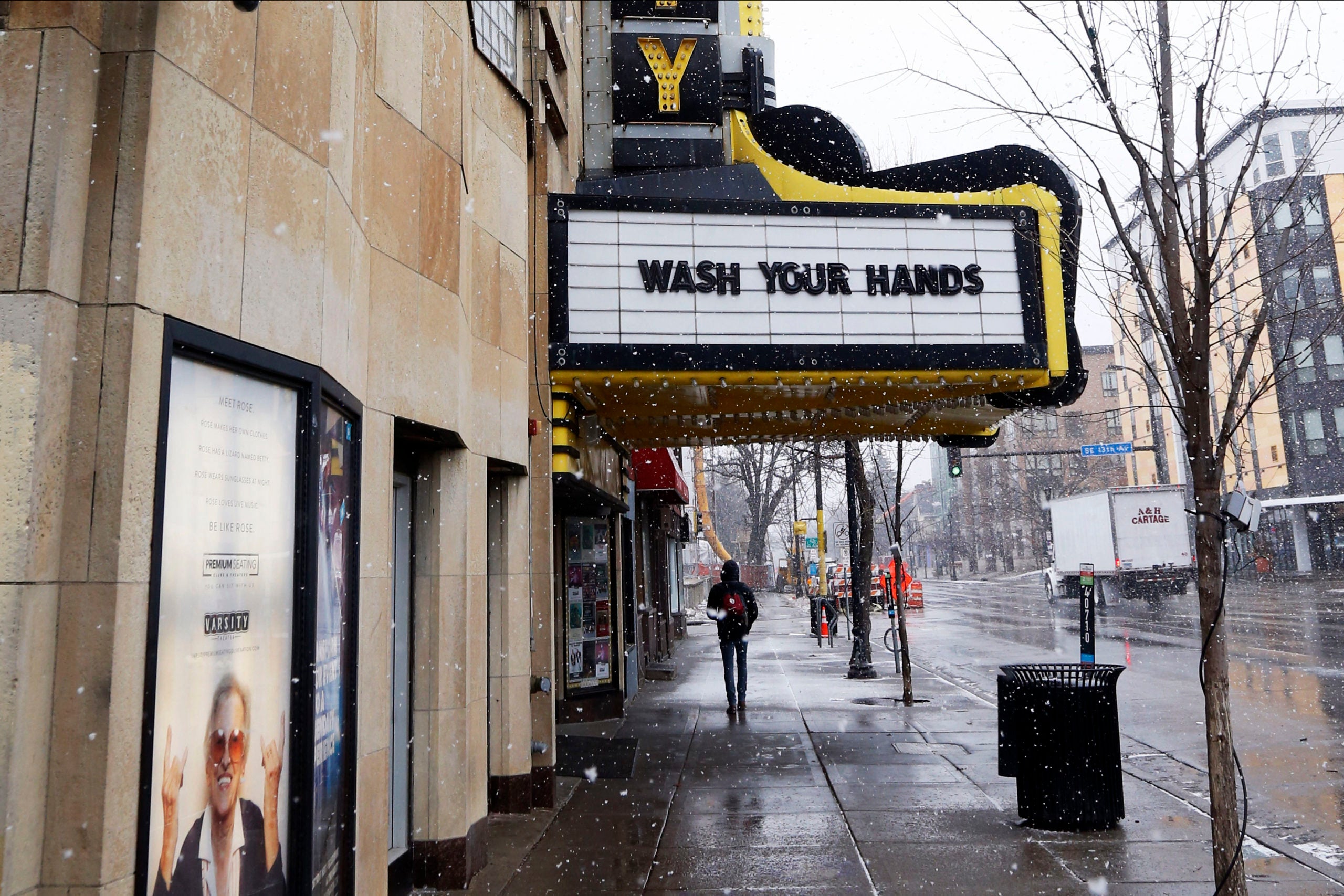 The Varsity Theater, home to concerts, used the marquee to address the need for washing hands due to the coronavirus, the disease that is caused by the new coronavirus, Monday, March 16, 2020 near the University of Minnesota in Minneapolis. (AP Photo/Jim Mone)

With most of Hollywood’s March and April releases already postponed, the Walt Disney Co. on Tuesday also cleared out its May releases as well, including Marvel’s “Black Widow.”

The largest chains had tried to remain open even as Hollywood postponed its upcoming release plans and guidelines for social distancing steadily diminished the recommended size of crowds. But after President Donald Trump on Monday urged against gatherings of more than 10 people, AMC Theaters, the nation’s largest chain, said Tuesday its theaters would close altogether.

AMC said the latest guidelines made movie theater operations “essentially impossible.” It said it would close all locations in the U.S. for at least six to 12 weeks. Regal, the second largest chain, said Monday that its theaters would close until further notice.

The Walt Disney Co. also indefinitely postponed “Black Widow,” which had been set to open May 1. Marvel movies have for years been the regular kickoff to the summer movie going season. The company also put off the releases of “David Copperfield (May 8) and “The Woman in the Window” (May 15).

With movie theaters locked down for the foreseeable future, some studios took the extraordinary step of funneling new or recently released films onto home viewing platforms. Universal Pictures said Monday it will make its current and upcoming films available for on-demand rental, becoming the first major studio to break the traditional theatrical window of 90 days due to the pandemic.

The studio said it will put movies currently in theaters — “Invisible Man,” “The Hunt,” “Emma”— up for rental as early as Friday. It also said that “Trolls World Tour,” one of the only major releases left on the April calendar, will debut in theaters and on-demand services simultaneously. A 48-hour rental will cost $19.99.

Most of Europe’s cinemas have already shut down, as have those in China, India and elsewhere. North America’s shutdown came gradually. On Sunday, the mayors of New York and Los Angeles ordered their cities’ theaters closed. Governments in Massachusetts and Quebec also closed theaters.

New York’s Film Forum marquee, usually adorned with titles, instead bore a paraphrased Franklin Roosevelt quotation: “We have nothing to fear but fear itself.”

The Alamo Drafthouse put an “Intermission” card up on its website.

“This news – this situation – is devastating,” the 41-theater circuit based in Austin, Texas, wrote. “When we re-open after this unprecedented and indefinite hiatus, it will be in a dramatically altered world, and in an industry that’s been shaken to its core.”

Over the weekend, ticket sales plunged to their lowest levels in at least 20 years at U.S. and Canadian theaters. Not since a quiet September weekend in 2000 has weekend box-office revenue been so low, according to data firm Comscore.

Universal’s move could be seen as either a watershed moment for Hollywood or an aberration due to extreme circumstances. With few exceptions, the major studios have guarded the 90-day exclusivity window even as digital newcomers like Netflix and Amazon have challenged it.

The National Association of Theater Owners, the trade group that represents movie exhibitors, made its first statement on the shutdowns Tuesday, acknowledging the hardship facing movie theaters but also pledging that the theatrical window will resume once the crisis has passed.

The organization said speculation that this will permanently expand home streaming of Hollywood studio productions “ignores the underlying financial logic of studio investment in theatrical titles.”

“To avoid catastrophic losses to the studios, these titles must have the fullest possible theatrical release around the world,” the association said in a statement. “While one or two releases may forgo theatrical release, it is our understanding from discussions with distributors that the vast majority of deferred releases will be rescheduled for theatrical release as life returns to normal.”

NBCUniversal is prepping its own streaming service, dubbed Peacock, but it isn’t to launch until July 15. On Sunday, the Walt Disney Co. made “Frozen 2” available on its streaming service, Disney Plus. But that film had already completed its theatrical run. Its digital release didn’t break the traditional 90-day theatrical exclusivity window.

And Hollywood’s major upcoming releases aren’t currently heading for the home; they’re being held for when theaters reopen. Paramount Pictures’ “A Quiet Place Part II,” earlier slated for release Friday, has been removed from the schedule.

Disney’s “Mulan” and the James Bond film “No Time to Die” have been put off. Universal earlier pushed its latest “Fast and Furious” movie, “F9,” from late May to April of next year.

While the new coronavirus can be deadly, particularly for the elderly and people with other health problems, for most people it causes only mild or moderate symptoms, such as fever and cough.

Some feel no symptoms at all and the vast majority of people recover. In addition to advising against gathering of more than 10 people, Trump has urged all older Americans and those with chronic health conditions to stay home.