Late-night comics adjust to shows without an audience 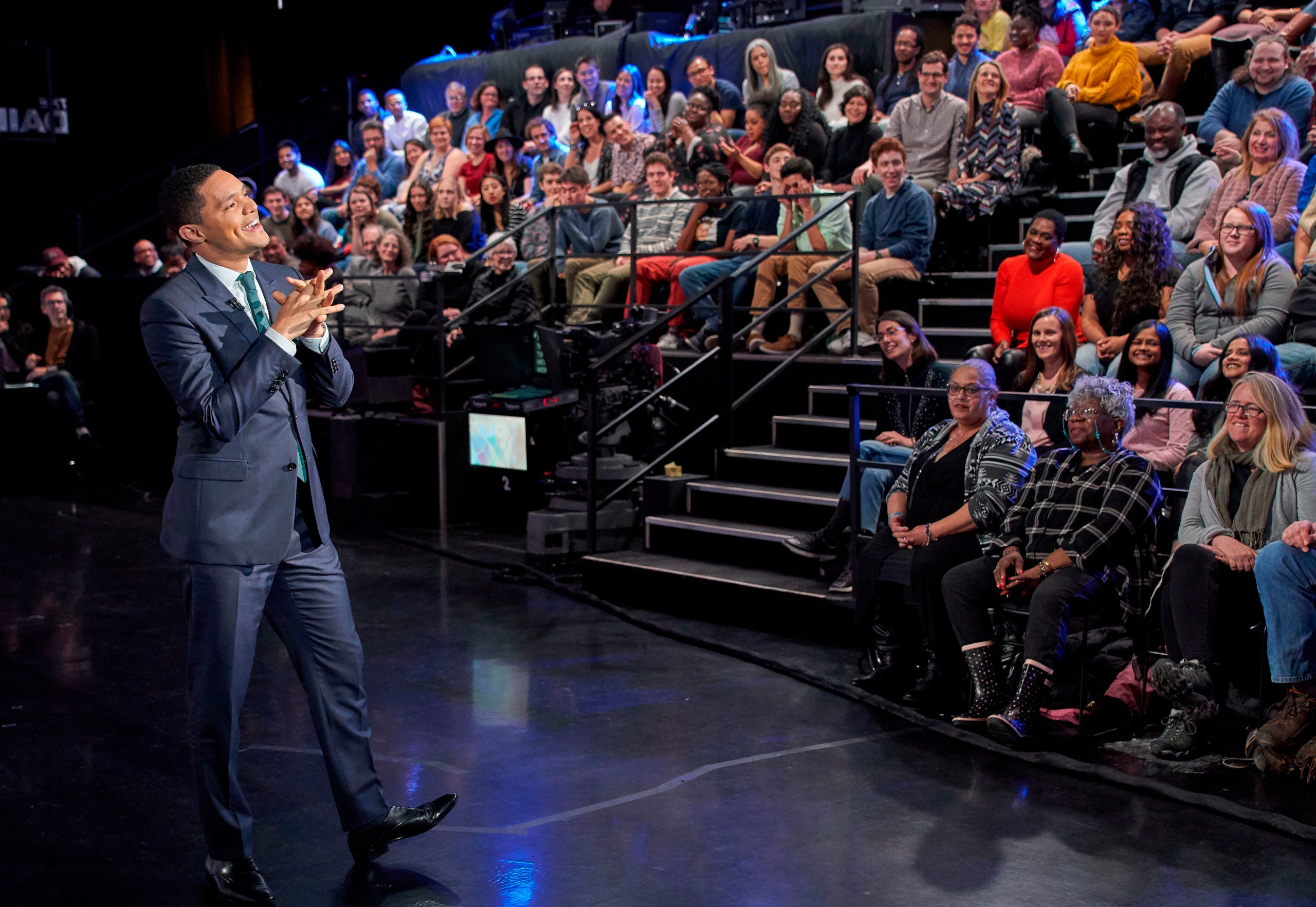 This undated image shows host Trevor Noah with his audience during a taping of “The Daily Show with Trevor Noah.” The show, along with other New York-based late night talk shows “The Tonight Show Starring Jimmy Fallon” and “The Late Show with Stephen Colbert” will tape their shows without studio audiences due to the new coronavirus. For most people, the new coronavirus causes only mild or moderate symptoms. For some it can cause more severe illness. (Comedy Central via AP)

NEW YORK — Due to the new coronavirus, late-night comedians — Stephen Colbert, Jimmy Fallon, Pete Buttigieg — are taking to the stage without the affirmation of adoring audiences.

The former presidential candidate filled in for Jimmy Kimmel on Thursday night on ABC. It was prearranged, since Kimmel was taping episodes of “Who Wants to Be a Millionaire,” but the timing was unfortunate. Each of the three shows decided only hours before taping on Thursday to go without an audience, save for handfuls of staff members.

“Everyone is spread apart at the CDC-recommended distance,” said Buttigieg, whose husband was sitting among the empty seats.

Buttigieg, a Democrat who sought the presidency, had the chief job qualification of a late-night host, circa 2020. He was more than willing to tell biting jokes about President Donald Trump.

“When you don’t have a real audience, you have to fake one,” he said. “Just like Trump’s inauguration.”

During his monologue, producers cut to film clips of enthusiastic audiences, from awards shows or the State of the Union address.

As an amateur, Buttigieg was more than willing to blame lame jokes on the writers. Colbert noted when a punchline got a response from his meager audience that he was paying most of them. Questlove of the Roots was the chief arbiter of Fallon’s jokes that landed or were fed to a paper shredder.

Going without an audience “might be a good thing,” said Colbert, who was out-of-breath after a brief run through the empty seats. “In my mind, all of my jokes are perfect. The only person that ever disagrees with me right now is the audience.”

They were not the only television shows to dispatch with audiences. On “The View,” a meager crew of staff members tried vainly on Thursday to replicate the noise that would normally come from a full crowd of tourists.

“All three of you,” Joy Behar tartly said.

Fallon took a serious turn to start his “Tonight” show monologue which, like Colbert’s, was performed seated behind his desk.

“Like you, I’m watching the news and I’m just as confused and freaked out as you are right now,” he said. “I know the (Trump) speech last night didn’t help. But I know that when we’re here for each other, we’re at our best, and I’m here for you.”

Both Fallon and Colbert brought on television doctors — Mehmet Oz and Sanjay Gupta — for sharp and informative segments, asking basic questions about the virus and preparedness that often go overlooked on news programs. Both doctors used hand sanitizer to instruct viewers on the thorough, most effective way to wash hands, reminding people not to forget their thumbs.

The doctors were also blunt in discussing their disappointment that the United States seemed unprepared to test all who want one.

“Should we have been preparing for the last six weeks?” CNN’s Gupta said on Colbert’s “Late Show.” “For sure. Did we? It doesn’t seem that way.”

For most people, the new coronavirus causes only mild or moderate  symptoms, such as fever and cough. For some, especially older adults and people with existing health problems, it can cause more severe illness, including pneumonia.

The vast majority of people recover from the new virus.

Fallon and Colbert also picked the exact same segments of Trump’s speech to mock: the “hot mic” moment when the president appeared to relax after the speech was done, and when he stumbled on the word “counting.”

“It’s not comforting when a guy trying to tell us to keep calm during a respiratory crisis loses his breath on a two-syllable word,” Colbert said.

While the Dixie Chicks’ scheduled appearance with Colbert was postponed, Mandy Moore performed to empty seats on the “Tonight” show, and Jhene Aiko and Miguel were introduced by Buttigieg. Moore, gamely, called it a “slightly elevated rehearsal.”

“I feel like social isolation is my vibe,” he said.

All of the hosts were self-conscious about the different circumstances. Fallon took an artsy approach by ending the show with a short segment that showed the on-air talent winding down amid the quiet vibe, as he put his feet up on the couch next to him. His show is going on hiatus until March 23.

Colbert — whose show is on hiatus until March 30 — occasionally took sips from a glass half-filled with a brown liquid he said was bourbon. Whether or not that was true, it appeared to relax him.

“Right now,” he said to the camera, “I’m imagining your laughter.”