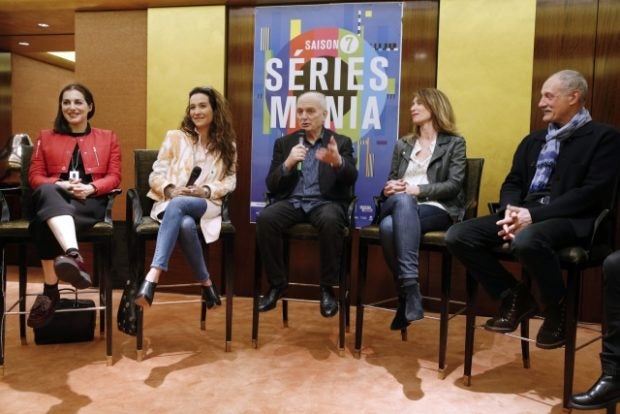 Members of the international competition jury of the “Series Mania” festival attend a press conference in Paris on April 15, 2016. Image: AFP/Francois Guillot

A leading European festival, Series Mania, offering the cream of upcoming streaming and television series, was canceled Wednesday because of the coronavirus epidemic.

The gathering, which draws more than 80,000 people to the northern French city of Lille was to have begun on March 20.

Festival president Rodolphe Belmer said the “difficult decision” had to be made after the Paris government banned gatherings of more than 1,000 people amid international travel restrictions.

A rival festival, Canneseries, fell victim to the virus last week and was postponed until autumn.

The world’s second-biggest television and entertainment market, MIPTV, which was to run alongside it later this month in Cannes, was also canceled.

A slew of concerts, operas and ballets have been pulled or postponed across France in an attempt to slow the spread of the virus.

The Musee d’Orsay in Paris — which holds the world’s biggest collection of Impressionist paintings — also began restricting access to 1,000 visitors at a time Wednesday, two days after the Louvre imposed a similar bar.

The world’s most visited museum will only allow people in who have already reserved a ticket online or those who normally get free entry.

The Series Mania cancelation puts further pressure on the Cannes film festival — the world’s biggest — which is held in the Riviera resort in May.

Its president Pierre Lescure remains bullish, despite Cannes being close to the outbreak in Italy, which is now under lockdown.

“We remain reasonably optimistic hoping that the peak of the epidemic will be at the end of March and that we can breathe more freely in April,” he told the French daily Le Figaro.

Variety revealed Tuesday the festival had turned down a chance to take out insurance against epidemics.

But Lescure said the coverage being offered was “peanuts” compared to the 32 million-euro ($36 million) cost of the festival, which draws more than 40,000 people and half of Hollywood to Cannes for 12 days.

“We have (financial) reserves,” he added. “The funds we have put in place allow up to face up a year without revenue.” RGA