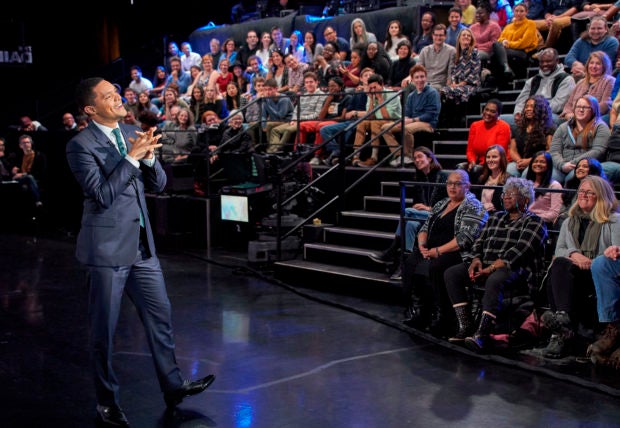 Trevor Noah with his audience during a taping of “The Daily Show with Trevor Noah”. Image: Comedy Central via AP

The ripple effect of the new coronavirus on the entertainment industry reached late-night and daytime television, a TV fan festival and far beyond to the series “Survivor” in Fiji.

Nickelodeon’s annual Kids’ Choice Awards, set for March 22 in Los Angeles, also is affected. It will be postponed for the “safety and well-being” of all involved with the show, the channel said Wednesday.

“The Tonight Show” and other late-night talk shows in New York announced Wednesday they will tape without audiences, while CBS said that production on the next season of “Survivor” was being postponed.

In a statement Wednesday, NBC said it was suspending live audiences for Jimmy Fallon’s “Tonight Show” and “Late Night with Seth Meyers” starting Monday, citing the safety of guests and employees as the “top priority.”

CBS announced that “The Late Show with Stephen Colbert” also will tape without an in-studio audience, as did Comedy Central’s “The Daily Show with Trevor Noah”, HBO’s “Last Week Tonight with John Oliver” and Bravo’s “Watch What Happens Live with Andy Cohen”, starting March 15.

“For the past several weeks, ‘The Late Show’ producers have consulted daily to share information with other New York-based late-night shows, who will also be moving forward without an audience,” CBS said in a statement.

The step was taken based on guidance from New York City officials, CBS said, and out of an “abundance of caution regarding” the virus and the uncertainty of the situation.

The shows’ broadcasts will be unaffected. Not all shows will be without a live audience. “The Talk” on CBS will continue with its regular live audience.

Another daytime program, “The Ellen DeGeneres Show”, said it will suspend audience attendance starting Monday. The action will not affect the talk show’s production schedule, and it will be regularly reviewed, Telepictures Productions said.

Meanwhile, a postponement was announced for PaleyFest LA 2020, the TV festival that was set to begin Friday and run through March 22 with salutes to shows including “Modern Family” and “The Mandalorian”.

Also Wednesday, CBS said production on the 41st edition of “Survivor” has been postponed in response to the spread of the coronavirus. Filming was scheduled to begin later this month in Fiji. But CBS now said production will start on May 19, depending on events.

The entertainment sector’s response to the unfolding crisis has included cancellation of the SXSW festival in Austin, Texas, and delays of events include California’s Coachella festival and the release of the latest James Bond movie.

For most people, the new coronavirus causes only mild or moderate symptoms, such as fever and cough. For some, especially older adults and people with existing health problems, it can cause more severe illness, including pneumonia.

The vast majority of people recover from the new virus. According to the World Health Organization, people with mild illness recover in about two weeks, while those with more severe illness may take three to six weeks to recover. RGA