LOS ANGELES—Saying that the story of “Spider-Man 3” is “absolutely insane,” Tom Holland is excited to put on the Lycra suit of Marvel’s webbed-slinger again come July when they start shooting.

In our recent interview, Tom talked about the untitled “Spider-Man” sequel, which will be directed by Jon Watts with the script written by Chris McKenna and Erik Sommers, based on the comics by both the late Steve Ditko and Stan Lee. The English actor also confirmed that Zendaya will “definitely” be back as MJ.

We are optimistic that Jacob Batalon, the Filipino-American actor who has such good chemistry with Tom’s Peter Parker as Ned, the best friend, will return as well.

In the meantime, the 23-year-old British actor voices Ian Lightfoot in Pixar Animation Studios’ latest animation triumph, “Onward.” Directed by Dan Scanlon who also wrote the story and screenplay with Keith Bunin and Jason Headley, “Onward” is set in a suburban fantasy world.

Dan explained the story’s origins in “Onward’s” production notes: “The story is inspired by my own relationship with my brother and our connection with our dad, who passed away when I was about a year old. He’s always been a mystery to us. A family member sent us a tape recording of him saying just two words: ‘hello’ and ‘goodbye.’ Two words. But to my brother and me—it was magic.

“That was the jumping-off point. We’ve all lost someone, and if we could spend one more day with them—what an exciting opportunity that would be.” 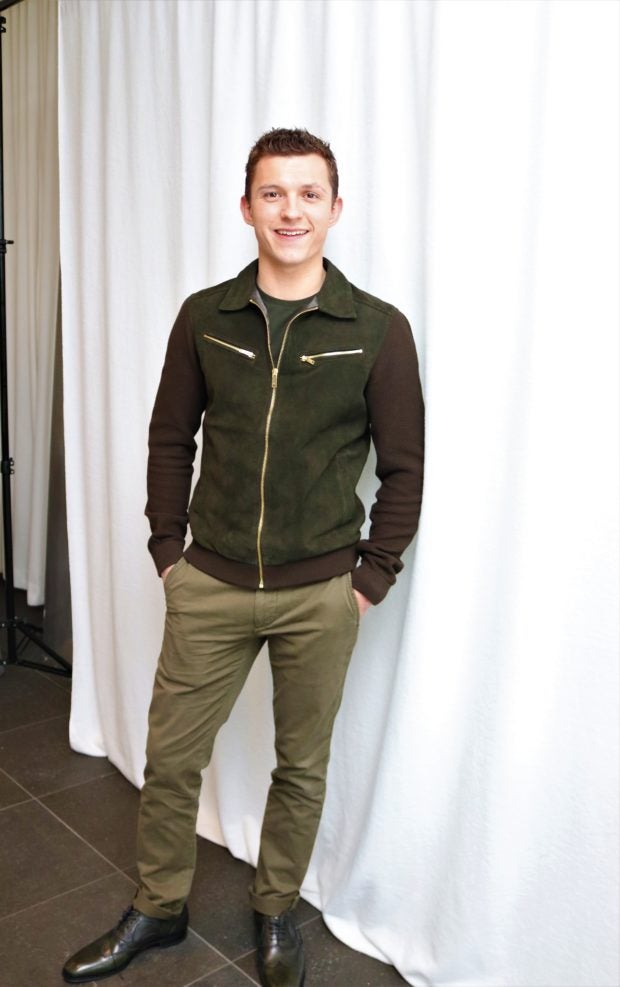 Will there be a third Spider-Man movie? And will you, as Spider-Man, appear in other Marvel movies?

Yes is the answer to that question. I’m super happy about it. We will be shooting “Spider-Man 3” in July in Atlanta.

As for me showing up in other Marvel movies, I’m not sure as to what they want me to do.

In “Spider-Man 3,” Zendaya will most definitely be in the film. As to the relationship between Peter and MJ, I’m not too sure what it will be.

How do you cope with all the attention since you rose to fame with Spider-Man?

I’m very lucky in my career to have people I look up to who are readily available for whenever I need them. For example, Chris Pratt in this film, “Onward.” Since I got cast as Spider-Man, he’s been like a big brother to me. He’s always on the other end of the phone should I need to ask him advice about dealing with this concept of being famous and people feeling like they own a little piece of you.

It’s really my friends around me in the industry, because I look up to Chris Pratt, Chris Hemsworth, Scarlett Johansson and Robert Downey Jr. I’d like to be like them in the future, so it’s very easy for me to just copy them, and see how they’ve dealt with stuff.

When you were growing up, which animated films did you love?

For me, growing up, the original “Robin Hood,” with the fox and the vixen, was a massive film. In recent years, “Coco” has been my favorite Pixar movie, hands down. I have an amazing relationship with my granny, Tess, and she’s quite similar to Mama Coco in that film.

“Onward” brings to mind road trips. Have you experienced a road trip that was a journey of self-discovery?

I wouldn’t say a road trip. But I’ve been on the road my entire adolescence. So, you could say I’ve been on a road life for the last 10 years, which has been amazing. I’ve spoken to you in five or six different cities around the world, and that’s a really amazing thing to be able to say.

You learn a lot about yourself being on the road because you’re always with new people, seeing new faces and having to adapt to new environment.

And, as in this film, metaphorically—have you had that walk across a bridge?

When “Spider-Man 1” came out, there was a very clear fork in the road of where I could go. I could go one way or the other. I chose the way that I think my parents probably would’ve wanted me to go. So maybe there was a step made as to what kind of man I would be in the future.

As a former child actor, did you ever take a kid actor under your wing because you know how it feels to be a kid surrounded by adults on set?

I remember being a kid working with Chris Hemsworth for the first time on “In the Heart of the Sea.” He was obviously Thor and I was a huge fan of the Marvel Universe. I remember him being so nice and welcoming. We got along really well.

I just make sure whenever there’s a young kid on set that he walks away having a good time, rather than having a negative experience.

And do you have any bad memories as an actor?

I broke my nose a bunch of times. I dislocated my ankle six weeks ago on “Cherry.” Those aren’t the best memories ever. But the bad memories are easily outweighed by the good ones.

Earlier, you were talking about being grateful to your brothers for bringing you down to earth because it’s easy to get lost, so to speak, in Hollywood. Can you elaborate on getting lost in Hollywood?

Yeah, I knew that was coming (laughs)! Getting lost in terms of dealing with the idea of being famous, giving up your privacy, love life. You have to learn quickly because unfortunately in this business, you will be taken advantage of.

And you have experienced that?

I’ve been lucky with my studio experience. Tom Rothman (Sony Pictures chair) is a great friend of mine. That’s the same for Disney. Bob Iger, Kevin Feige, Victoria Alonso and Louis D’Esposito have all been like godparents to me.

So, any tricky situation I’ve ever found myself in, it’s only been one phone call away before I can get it handled.

So, talk some more about how your brothers bring you down to earth.

How do you deal with having relationships when you have no privacy?

Dealing with a relationship in this industry is not very easy because it means that going to dinner isn’t just going to dinner. It’s, “Oh, I have to look nice because I know there’s going to be paparazzi waiting around the corner.”

So, when it comes to that sort of stuff, I just keep a low profile.

Are your fans generally respectful when you have those private moments?

My fans are really supportive of everything that I do. People ask me for photos when I’m out and about, and that’s part of the job. I’m always happy to make a little kid’s day.

What can you share about two movies that you have completed, “The Devil All the Time” and “Cherry”?

“The Devil All the Time” isn’t a comedy. It’s a strange departure from Spider-Man. I’m playing a kid from the deep South who ends up murdering a bunch of people. He thinks he’s justified in what he’s doing. But I will say it was the first time I’ve ever pretended to murder someone.

I think “Cherry” is my best work. The Russo brothers (Anthony and Joe, directors) have done such an amazing job of saying goodbye to the Marvel Universe and opening up this new chapter to the future of their careers. I’m so glad that they would have me along on that journey with them. When you see “Cherry,” you’ll be pretty shocked at my transformation.

Can you describe your character in “Cherry”?

My character doesn’t actually have a name in the film. He’s a kid who decided to join the army and became a medic. He served in Iraq for over a year and had a really hard time out there.

When he came home, he was self-diagnosed with PTSD (posttraumatic stress disorder) and started abusing OxyContin, which then spiraled into a serious opioid addiction. To feed his drug addiction, he starts robbing banks and ultimately ends up in prison.

It’s the story of this awful spiral that he found himself in, and the problem we have with how we treat veterans when they come home and the lack of support that we give them. It will be eye-opening for people around the world to see that film.