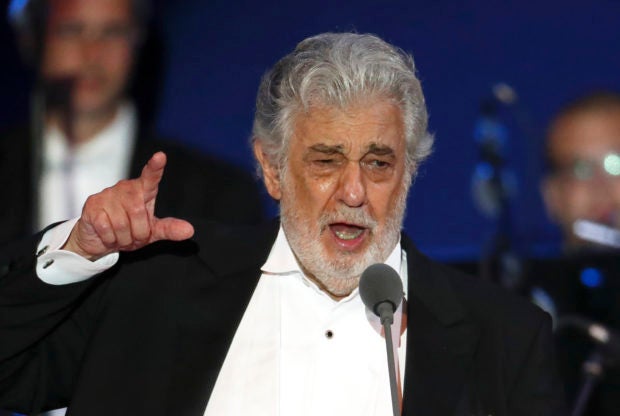 SAN FRANCISCO — An investigation commissioned by the Los Angeles Opera into sexual harassment allegations against ‪Plácido Domingo has found that the legendary tenor engaged in “inappropriate conduct” with multiple women over the three decades he held senior positions at the company, which he helped found and later led.

Investigators say 10 women accused the star of engaging in inappropriate conduct between 1986 and 2019. Investigators deemed the allegations credible, according to a summary released Tuesday by LA Opera.

The findings did not detail any of the allegations, but said the “level of discomfort reported by the women varied, ranging from some women stating they were not uncomfortable to others who described significant trauma.”

The six-month investigation, conducted by outside lawyers, also found “no evidence that LA Opera ever ignored, failed to address, or covered up sexual harassment complaints,” the summary said.

The accusations echo those of a separate independent investigation released two weeks ago by the American Guild of Musical Artists, the U.S. union that represents opera performers.

Both investigations were launched after the publication of Associated Press stories last year in which multiple women accused Domingo of sexual harassment and abusing his power. Dozens of people told the AP that his behavior was an open secret in the opera world, where men in positions of authority have long behaved with impunity.

Domingo, now 79, has been regarded as one of the greatest opera singers of all time and a key power broker in the industry. He served as general director at Washington Opera from 2003-2011 and helped found LA Opera in the 1980s before becoming an artistic adviser, then artistic director and finally general director from 2003 until his tenure was cut short by the allegations last year.

The LA Opera investigation, conducted by the law firm Gibson, Dunn & Crutcher, said Domingo was one of 44 people interviewed and that the singer had “denied all allegations of unwanted contact and maintained that all his interactions were consensual.”

The report added that investigators “often found him to be sincere in his denials but found some of them to be less credible or lacking in awareness.”

It also said that investigators “found no evidence that Mr. Domingo ever engaged in a quid pro quo or retaliated against any woman by not casting or otherwise hiring her at LA Opera.”

Nancy Seltzer, a spokeswoman for Domingo, said he had no immediate comment on the findings.

Two weeks ago, Domingo issued a pair of conflicting statements after the American Guild of Musical Artists concluded that he had “engaged in inappropriate activity, ranging from flirtation to sexual advances, in and outside of the workplace.”

The union did not release specific findings. But people familiar with the investigation who spoke on condition of anonymity told the AP that investigators found 27 people were sexually harassed or had witnessed inappropriate behavior by Domingo in the 1990s and 2000s while he held senior management positions at the LA Opera and the Washington National Opera.

In concert with the findings, Domingo apologized to the women who had accused him of misconduct, after denying the allegations for months. “I want them to know that I am truly sorry,” he said. “I accept full responsibility for my actions.”

But two days later, as several Spanish organizations moved to cancel his appearances, he issued a second statement saying his apology had generated a false impression that he wanted to correct. “I have never behaved aggressively toward anybody, nor have I ever done anything to obstruct or hurt the career of anybody,” he said.

The cancellations in Spain were the first in Europe, where reaction to the misconduct allegations was more muted than in the U.S., where Domingo’s performances were swiftly canceled.

More cancellations have followed. London’s Royal Opera House said in a statement last week it had mutually agreed with Domingo that he withdraw from a July production of “Don Carlo.”

The Hamburg State Opera said Tuesday that Domingo had canceled planned appearances in late March and early April because of the coronavirus outbreak. The German company said the cancellation was due to medical recommendations stemming from his age and other factors and that it “understands and respects this decision.” NVG