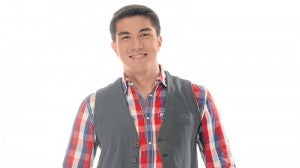 TV host-actor Luis Manzano would rather not talk about his relationship with Alex Jazz, the 3-year-old son of girlfriend Jennylyn Mercado, out of respect for Patrick Garcia, Alex’s father.

“I don’t want to be accused of meddling,” said Manzano at a press conference for his latest movie, “Moron 5 and the Crying Lady.”

Luis said that he and Jen were fine. “We always make time for each other,” said the host of the ABS-CBN game show “Kapamilya, Deal or No Deal.”

But he admitted that they had character differences. “I’m impulsive. Sometimes we plan something and I change my mind at the last minute. That irritates her,” he said.

Luis recalled that he and Jen went diving in Bohol and she liked it. “Now she’s doing underwater photography. I’m encouraging her to open an online photo blog,” Luis added. They also like mixed-martial arts.

He stressed they had no marriage plans for now. “Jen’s priority is her family and work,” he said. “Jazz is the most important person in her life. I, too, feel that I have a lot more to accomplish before tying the knot.”

Is it true that you’re being wooed to run for a political post in Batangas province, where your mom (Vilma Santos) is governor?

Some people have asked me about it. I think they saw how well my mom did as mayor of Lipa, and how well she does now as governor of Batangas. I guess they thought I could do well, too.

I’ve always been interested in politics. It fascinates me. Elections are coming up soon.  If I decide to run, I’d have to give up my show-biz career… to be fair to my constituents.

You have over a million followers on Twitter. What do you think of bashers?

The freedom to express your opinion online comes with social responsibility. If you have something to say, do it up-front and not anonymously through a computer.

No. For every one of my haters, I automatically get 20 followers who appreciate what I do. I’ll take that anytime.

How important are social networking sites to you?

I feel fortunate to have so many followers. I feel connected to them at all times.

Your dad Edu Manzano got a lot of flak recently for posting on Twitter something about President Noynoy Aquino and his rumored girlfriend Grace Lee. What’s your reaction to this?

My dad was man enough to apologize for his mistake. People shouldn’t believe everything they read. I myself have posted things that I later realized were wrong. I’ve apologized, too.

Is it hard to fill Kris Aquino’s shoes as “KDOND” host?

I’ve stamped my own identity on the program and management seems to like it so far. I think viewers like it, too.

What’s the challenge in hosting a game show?

The challenge is to connect with the player. P2 million is at stake. I’m there to remove the pressure. It’s tough to maintain the connection, the energy and the suspense.

What do you feel when a player loses?

I felt bad once when a contestant, a fireman, didn’t get the top prize.

By the way, none of us knows which briefcase has the P2 million. One person puts the prizes in the briefcases, another person seals them, and another distributes them to the 26K girls. Even I feel the suspense!

What is your new movie, “Moron 5 and the Crying Lady,” about?

It’s a fun movie where I play Albert, the leader of five mentally retarded guys! John Lapus, the crying lady, has all of us imprisoned. The cameos are great. We’re all thankful to the stars who agreed to appear on the film without charge.