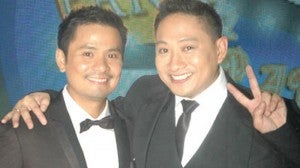 TWO ‘PARES’: Ogie and Bitoy are opposites, but are in sync.

Comedian Michael V was unperturbed when asked about the hottest issue in Show Town—the supposed coming merger of his home network GMA 7 and his former station TV5.

“In show business, anything and everything is possible,” he told the Inquirer. “My goal is to please viewers. I don’t see a problem as long as the network’s thrust remains the same.”

And with good reason. Apart from the GMA Films-Regal movie “Boy Pickup,” the GMA 7 bosses have entrusted them with a new program, “Pare & Pare,” which debuts next month and airs Sundays.

It’s a gabfest, and therefore a dream come true for them. Noted Ogie: “It’s like ‘The Tonight Show with Jay Leno’ or ‘The Late Show with David Letterman.’”

“Or ‘Late Night with Jimmy Fallon’ or Martin Nievera’s old show, ‘Martin After Dark,’” added Michael V, or “Bitoy,” as he is known on “Bubble Gang.”

He continued: “Direk Bert de Leon and I talked about collaborating on a show like ‘Pare & Pare.’ Mel Villena, our musical director, was also enthusiastic. Things just fell into place.”

“Taping the show has been one big party so far,” said Bitoy. “The show will constantly highlight two perspectives. Ogie was born rich; I’m masang-masa. We have contrasting views on nearly every issue.”

“We won’t be upstaging one another,” Ogie said. “We’ve worked together for 16 years; everything comes naturally to us. We complement each other.”

They have the same dream interviews: Senator Miriam Defensor-Santiago and President Noynoy Aquino.