‘The Missing’ is a homage to modern Japanese horror movies 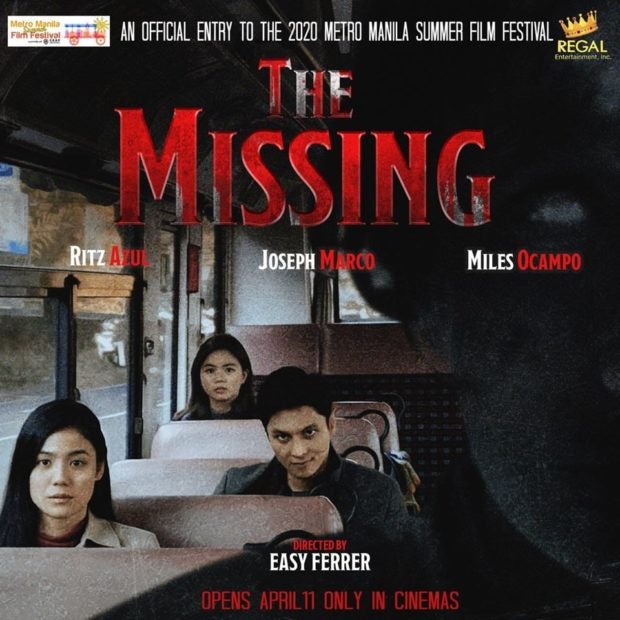 Stylistically, tonally and thematically, ‘The Missing’ seemingly has all the “bells and whistles” of belonging to the Japanese horror genre even though it is an upcoming movie that is proudly Philippine-made by Regal Entertainment, Inc. and was filmed in Japan. For me, the fact that this movie was filmed in Japan gives it international standards already and definitely adds to its authenticity, credibility, and uniqueness among the list of movies to choose from and watch out for in this year’s first Metro Manila Summer Film Festival.

I was impressed by the official trailer of ‘The Missing’ that I ended up watching it several more times in a row. The official trailer of ‘The Missing’ was expertly crafted, visually pleasing, and intriguing as to what to really expect from this soon to be released movie from Regal Entertainment, Inc. It is one of those trailers that really crawls under your skin with repeated viewing; the tension builds up, the atmospheric mood changes from calm to impending danger, and the jump scares on their own are a treat to watch.

I am excited about ‘The Missing’ because I can sense it is going to be worth the wait especially for horror fans and purists based on its official trailer alone.

‘The Missing’ starring Ritz Azul, Miles Ocampo, and Joseph Marco can be viewed as a homage to modern Japanese classic horror movies. Think of the original Japanese versions of ‘The Ring’ and ‘The Grudge’ before the watered-down Hollywood versions of these said movies were released many years ago. I am certainly hoping ‘The Missing’ has enough rawness, grittiness, and scares in it to make it comparable to the movies ‘The Ring’ and ‘The Grudge’ –which I have mentioned earlier–that inspired and influenced this movie to be made.

The original Japanese versions of ‘The Ring’ and ‘The Grudge’ convinced the moviegoers in that decade that Japan could even make some of the most wicked, disturbing, and shockingly scary horror movies. I remember that the very first time I got to watch ‘The Ring’ I did not want to use a VHS player again for a while after my terrifying movie experience during my early teens because I could not help thinking that “Sadako” might suddenly crawl out of my television screen! It may seem hilarious to recollect these memories now but trust me, the fright was real back then. And that lasting effect it had on other moviegoers likewise is one reason why these two aforementioned movies have become cult favorites among moviegoers. For true horror fans, ‘The Ring’ and ‘The Grudge’ have become classics in their own right.

Now, will ‘The Missing’ have the same terrifying knee-jerk jump in your seat and grab your seatmate’s arm and cling on tightly for dear life effect on moviegoers? Obviously, there is only one way to find out. Watch it when it is released in cinemas nationwide on April 11, 2020.

‘The Missing’ is produced by Regal Entertainment, Inc and is directed by Easy Ferrer.