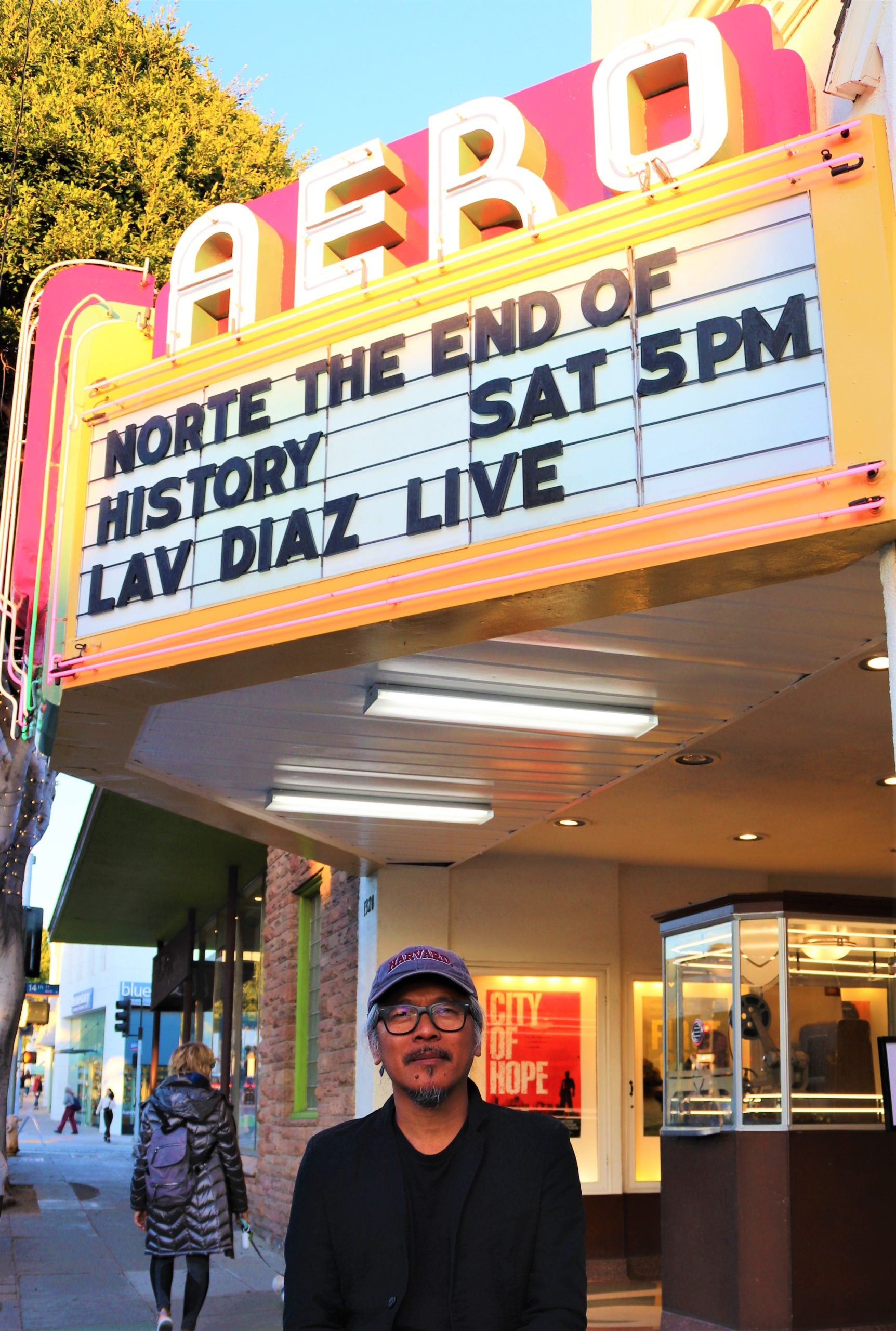 Lav Diaz outside the Aero Theatre in Santa Monica, California, on the first day of American Cinematheque’s salute to him. —PHOTOS BY RUBEN V. NEPALES

LOS ANGELES—Lav Diaz took time off from making his new film—something to do with the recent Taal Volcano eruptions—to attend American Cinematheque’s two-day salute to him in Los Angeles.

Wearing his trademark dark clothes and a cap, Lav—the first Filipino filmmaker to be given a tribute by American Cinematheque—showed up at the historic Aero Theatre in Santa Monica last Saturday for the first day of the weekend screening series honoring him.

Of course, this being an event saluting a Filipino director, there was a Pinoy food reception, thanks to Minda and Jun Chin’s Fiesta Fastfood, before the screening of “Norte, the End of History.” In Bayanihan spirit, TV show host Jannelle So-Perkins got the gracious Chins to provide the chow, which included lumpia and chicken adobo.

In similar fashion, JB Adkins answered American Cinematheque’s call for a volunteer to do the live subtitling of Lav’s “Batang West Side,” which was shown at the Egyptian Theatre in Hollywood last Sunday, March 1, with Lav also in attendance.

As Chris LeMaire, assistant programmer of American Cinematheque (the nonprofit organization dedicated to the celebration of motion picture in all if its forms), explained it, they borrowed a rare 35mm print of “Batang West Side” from the Austrian Film Museum, which houses Lav’s movies.

This print of “Batang West Side,” which Lav shot in New Jersey in the ’80s, does not have English subtitles embedded, so JB had to manually sync them as the film played.

It was significant that Aero and Egyptian, which showed two of Lav’s important films, are both historic movie palaces. Aero has been a moviehouse landmark in Santa Monica since 1940. Egyptian goes way back to 1922, when it opened and hosted the first ever Hollywood premiere.

In the Saturday screening of “Norte: The End of History,” hailed by the New York Times as one of its “Most Influential Films of the Decade,” Chris introduced Lav. Then, the long-haired Filipino master filmmaker said a few words before his film, inspired by Dostoevsky’s “Crime and Punishment,” and starring Sid Lucero, Angeli Bayani and Archie Alemania, was shown. 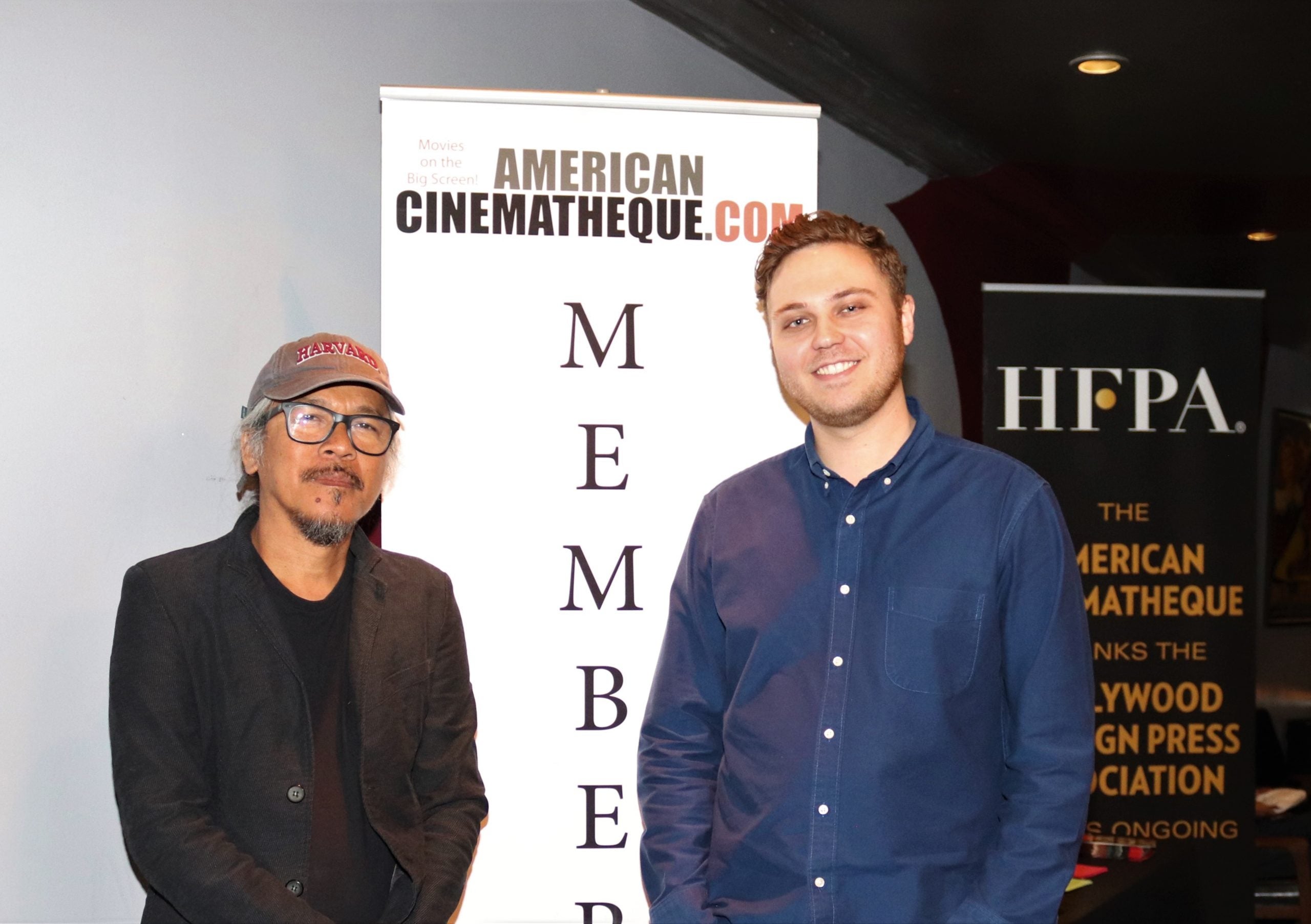 Lav (left) and Chris LeMaire, assistant programmer of American Cinematheque, which held the first ever tribute to a Filipino filmmaker.

We grabbed the rare chance to catch up with Lav in the lobby. As we toasted and drank Stella Artois beer, Lav disclosed that he has two films more or less completed. He was going to direct a third new film about something else, but when Taal Volcano erupted, he decided to shift his focus on the natural disaster.

We also learned from Lav that he had a good, long interview with PDI’s champion of Filipino indie cinema, Bayani San Diego Jr., before the latter passed away in 2018. Lav said he had a copy of the interview tape so how about running that interview by Bayani, our dear editor Rito?

As we chatted, Lav admired the vintage film projector displayed in the box office of Aero.

Unfortunately, we had to leave and missed the Q&A with Lav afterward. Fil-Am designer Alan del Rosario, a film buff, reported that the audience applauded as the closing credits of “Norte…” rolled. He praised the film as “powerful.”

Joe Arciaga, a Fil-Am community leader and producer of a coming film inspired by Filipino mythology, wrote about his reaction to “Norte…” in his Facebook post. He also described Lav’s opus as “powerful.” He penned, “Disquieting. Masterful filmmaking… Bravo, kabayan Lav. It was indeed an honor to meet you and join the community in experiencing your art and vision.”

We heard that Sunday’s screening of “Batang West Side,” one of Lav’s early films and his cinematic take on the American Dream, was also successful.

Chris reported, “Sunday was wonderful! Lav quite enjoyed presenting his film in the middle of Hollywood. And JB did great! I’m so glad you found him. He was very diligent.”