Weinstein juror: #MeToo movement not a factor in trial 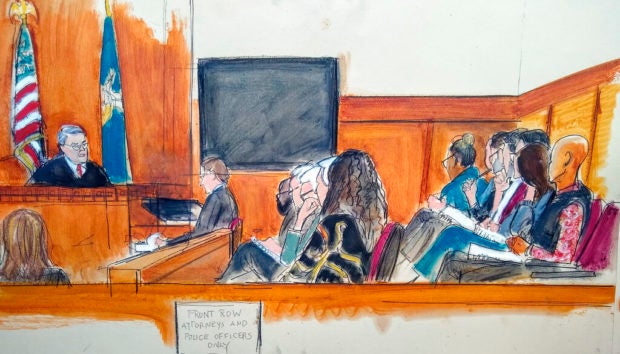 Judge James Burke, left, instructs the jurors before they begin deliberating on Harvey Weinstein’s rape trial on Tuesday in New York. The panel of seven men and five women heard instructions in the law from the judge before going behind closed doors to consider charges that Weinstein raped a woman in a Manhattan hotel room in 2013 and forcibly performed oral sex on another woman, TV and film production assistant Mimi Haleyi, in 2006. (Elizabeth Williams via AP)

NEW YORK — The jury that convicted Harvey Weinstein of rape and sex assault did not consider the trial’s implications for the #MeToo movement, one of the jurors said in an interview aired Friday.

“No, zero, absolutely zero,” juror Drew Malbin said on “CBS This Morning.” “Because it’s not the job and it’s not what we were asked to do.”

He added, “It would be an adulteration of the process to take outside factors and have that weigh on our decision-making process and eventual findings.”

Weinstein, 67, was found guilty Monday of raping an aspiring actress in a New York City hotel room in 2013 and sexually assaulting production assistant Mimi Haleyi at his apartment in 2006. He faces the possibility of years in prison when he is sentenced in March.

Malbin, who was identified in the CBS interview by his first name alone, said the jury took pains to make a decision based on the law and the evidence.

He said the actress’ testimony about the 2013 assault warranted a guilty verdict on the charge of third-degree rape, a lesser charge than the first-degree conviction sought by prosecutors.

Weinstein has said that any sexual contact was consensual. His lawyers have promised to appeal the conviction.

At the outset of the trial, Judge James Burke cautioned jurors: “This trial is not a referendum on the #MeToo movement.”

Weinstein, the former Hollywood mogul, has an injured back and other health problems and has been in Bellevue Hospital’s wing for prisoners while awaiting transfer to New York City’s Rikers Island jail complex.

Asked by CBS’ Gayle King whether Weinstein should be in jail, Malbin said, “That’s not for me to say.”

“You know, I could say that a man of his age and of his current health, the general population at Rikers sounds like a pretty dangerous place,” Malbin said.

Also Friday, a newly unsealed court transcript showed that Weinstein’s lawyers wanted the jury foreman kicked off the case for smiling at prosecutor Joan Illuzzi-Orbon as he left the courtroom after a tense day of deliberations. Illuzzi didn’t respond to the juror.

Weinstein lawyer Damon Cheronis asked for Bernard Cody’s removal on Feb. 21, just after the jury sent a note indicating it was deadlocked on the two most serious charges but had reached a unanimous verdict on other ones.

“As we were leaving, Ms. Illuzzi was sitting in her chair. Juror one walked up and looked in her direction, smiled, and said have a great or good weekend,” Cheronis complained in a previously sealed discussion at the judge’s bench.

“I think that is problematic, to say the least,” the lawyer added.

Burke denied Cheronis’ request to remove Cody from the jury, saying: “Nothing wrong with juror one, who was simply smiling when he left the courtroom.”

The transcript of the exchange was provided to reporters who complained that court officers were wrong to shoo them from the courtroom while the discussion was being had.

After a weekend off, jurors took just two more hours of deliberations to reach a verdict on all charges. Afterward, Cody told reporters the process was “devastating.” He didn’t elaborate.

The Associated Press does not typically identify people who say they are victims of sex crimes unless they grant permission, as Haleyi did.