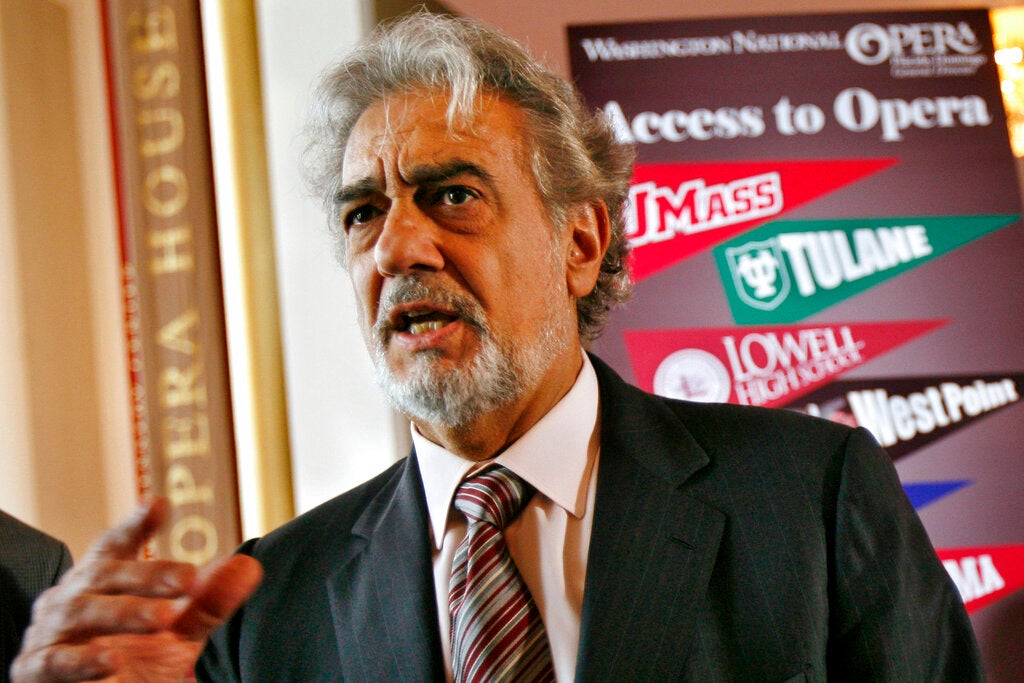 MADRID — The Spanish government canceled upcoming performances by Plácido Domingo in Madrid on Wednesday following the singer’s acceptance of “full responsibility” for actions that prompted sexual misconduct allegations, as cracks formed in the steadfast support European opera houses have shown for the tenor.

Spain’s Culture Ministry said Wednesday that “given the seriousness of the deeds,” and “in solidarity with women affected,” together with Domingo’s declarations of responsibility, it had canceled his part in “Luisa Fernanda” at the Teatro de la Zarzuela light opera house in mid-May.

The ministry’s decision came a day after the main U.S. union representing opera performers said its investigators found the opera star had behaved inappropriately over the course of two decades when he held senior management positions at Washington National Opera and Los Angeles Opera.

In response to the findings, Domingo issued a statement saying: “I respect that these women finally felt comfortable enough to speak out, and I want them to know that I am truly sorry for the hurt that I caused them. I accept full responsibility for my actions, and I have grown from this experience.”

The union’s investigation was the first of two independent inquiries launched after multiple women accused Domingo of sexual harassment and abusing his power in two AP stories published last year. The second inquiry, still ongoing, was launched by LA Opera, where Domingo had been general director since 2003 before resigning in October.

Domingo’s response marked a stunning reversal from the opera superstar’s initial statements in which he had denied wrongdoing.

Spanish Culture Minister José Manuel Rodríguez Uribes said, “Given that he (Domingo) wanted to take responsibility, our duty was to respond to that. Therefore, it is not the time for him to take part in the program, and that’s what we have decided in line with the facts admitted by him.”

“Until now the situation was different, there was a presumption of innocence,” said Rodríguez Uribes. “But since the moment he said that what happened did indeed happen, and given that this is a situation with serious events that affect many women, we have decided that it wasn’t appropriate to keep his presence and we informed him.”

“I think it’s more of a duty than a gesture of solidarity” to the women affected, he added.

Domingo has long been one of Spain’s most popular and respected stars. Many people came to his defense in Spain and across Europe when the charges first emerged last year and U.S. companies took swift action to distance themselves from Domingo by canceling his appearances or announcing he had withdrawn.

But the combination of the U.S. investigation’s findings and Domingo’s apology and admission this week showed cracks were forming in what had been staunch support for Domingo at other European opera houses, where so far no independent allegations of sexual misconduct or abuse of power have emerged.

Spain’s Teatro Real, one of the country’s main opera house, said Wednesday it will hold a meeting to discuss whether or not to continue with Domingo’s participation in the opera, “La Traviata,” in May, for similar reasons cited by the Culture Ministry.

Teatro Real press chief José María Noguerol said the theater’s executive commission would hold the meeting soon but he could not say exactly when.

He said the theater had also requested a copy of the U.S. investigators’ findings.

The full results of the investigation by the American Guild of Musical Artists have not been made public. People familiar with the findings told the AP that investigators found 27 people who said they were sexually harassed or witnessed inappropriate behavior by Domingo.

The Teatro Real initially said it stood by a presumption of innocence for Domingo when the allegations first surfaced last year, while stating that the theater had zero tolerance for the alleged misbehavior.

Both the Salzburg Festival and the Vienna State Opera said this week they, too, were seeking more information on the U.S. investigations before taking further action.

The Salzburg Festival, where Domingo is scheduled to perform two concerts of “I vespri siciliani” in August, acknowledged “the facts, however have now changed.” It cited Domingo’s statement in which he “concedes that his behavior might have hurt the women in question, and apologizes for this.”

The festival said it would obtain “comprehensive information on the investigations currently under way in the USA before it considers further steps.”

The Vienna State Opera said that it takes the case “very seriously,” and that it would take time “to examine the matter in detail,” before his scheduled appearances in June.

Domingo is still scheduled to appear in “Don Carlo” at the Royal Opera House in London in June and July.

Domingo is also scheduled to sing at a festival in the southern Spanish city of Úbeda in May. Spanish national television said the show has been sold out.