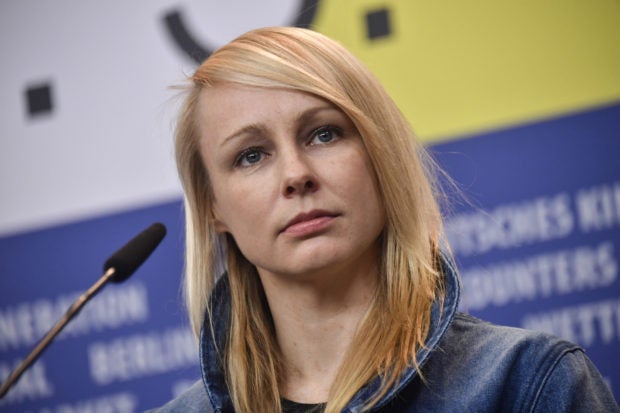 Australian director Kitty Green at a press conference for the film “The Assistant” screened in the Panorama category. Image: AFP/John Macdougall

With a wealth of female directors and a hit film partially based on the Harvey Weinstein revelations, the #MeToo movement is front and center at the 70th edition of the Berlin film festival this week.

Only six of 18 competition films are directed by women, meaning the Berlinale is still some way off gender parity in its competition line-up.

Yet according to Delphyne Besse from the pro-parity “50/50 for 2020” collective, Berlin is the film festival “which does the most” to ensure female representation.

Though there are fewer female directors up for the Golden Bear this year than in 2019, the number is still considerably higher than the rival festival Venice, where only two of 21 films were directed by women last year.

Historically, women have also won more prizes in Berlin than at any other festival.

Six women have won the Golden Bear — including two in the last three years — compared to just one female winner of the Palme d’Or at Cannes (New Zealander Jane Campion in 1993).

Since last year, the festival has also published statistics on the number of women in its selection committees and in the production of the films themselves.

A number of films on the Berlinale program this year tackle sensitive questions around women’s rights and representation.

Eliza Hittman’s film about a teenage abortion “Never Rarely Sometimes Always” is up for the Golden Bear, while Kitty Green’s “The Assistant” has caused such a stir that organizers were forced to schedule an extra screening.

Green’s film traces the daily struggle of a young female graduate working as an assistant in a New York production company.

Amid hostility from her colleagues and visits paid to her boss by attractive young women, the protagonist Jane (played by “Ozark” star Julia Garner) becomes aware she is working in an abusive environment.

Trained documentary-maker Green explained that the film is based on “hundreds of hours of interviews”, including women who worked under former producer Weinstein, who was convicted of rape and sexual assault on Monday.

Yet such “extremely toxic environments” are to be found in all industries, the director said.

“It’s not about a gender war, it’s about putting a stop to abuse.”

But are all films directed by women inherently feminist?

“I am just happy to be making films…despite my sex and my age,” said celebrated American indie director Kelly Reichardt, 56, with a hint of irritation.

In competition with the critically acclaimed “First Cow”, a reimagining of the Western genre about a friendship between two men, Reichardt has preferred to emphasize the humanist aspect of her film.

Berlinale jury president Jeremy Irons, meanwhile, was forced to defend himself over controversial comments he had made in 2011 about abortion, sexism and same-sex marriage.

The British Oscar winner said the comments were “already refuted and apologized for”, and insisted he supported “wholeheartedly the global movement to address the inequality of women’s rights”. CL/NVG

Read Next
Michael Douglas, Zeta-Jones to co-host Jerusalem ceremony
EDITORS' PICK
High inflation: Your P1 is now worth only 87 centavos
Geek out at TOYCON 2022 powered by Smart Signature
Unemployment rate up to 6% in May
UK’s Boris Johnson will resign, BBC reports
High-risk pregnancy: Reducing your risk is in your hands
House energy committee chair Arroyo bats for cheap electricity
MOST READ
Suspect in grisly killing of missing woman in Bulacan arrested
Kim Atienza’s daughter flaunts bikini body in response to critics of her ‘revealing photos’
Cop slain in Isabela ambush
FDA probes popular Filipino noodle brand for ‘high level of ethylene oxide’
Don't miss out on the latest news and information.