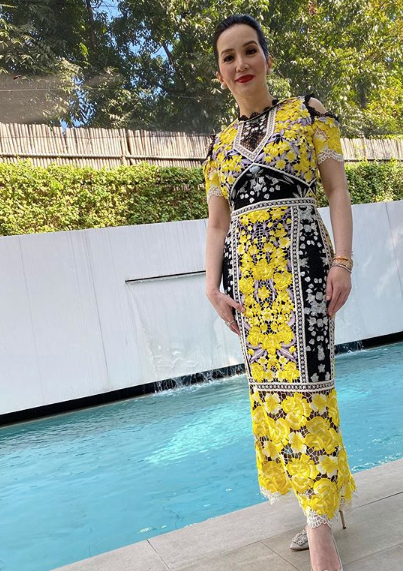 The Queen of All Media shared a video on Instagram that showed they were at the same wedding, given that they were both godparents of the bride. At one point, PNoy appeared in good spirits while standing at a pew with Kris and her eldest son Josh. Her second son Bimby could be seen laughing, presumably at the awkwardness of the situation.

Kris said she approached Noy during the rite of peace portion of the mass and that her sons had different reactions — Josh, who has always been fond of his uncle, was happy while Bimby was nervous.

(It was not forced, but this is an answered prayer of our sisters. In God’s time, we were reunited… this is true family.)

“Ayoko nang nag-aalangan si kuya (I don’t want Kuya to be hesitating) so as much as this was for us, this was really for my panganay (eldest). A mom will do anything to make her son’s life more comfortable basta kaya nya (as long as she can),” the actress and host replied.

It was just last Feb. 14, on her birthday, that Kris admitted in an Instagram comment that she and her brother were still not on speaking terms. After she shared a picture of letters from her older sisters, one Instagram commenter wondered about PNoy.

“It’s still a long journey needing mutual inclination and effort to communicate, understand and rebuild,” she had replied.

She noted too that her sons have maintained a relationship with their uncle. “Regardless [of] the nearly 2 years of NO communication—he and kuya remain constant textmates and my 2 sons see their Tito Noy regularly.”

Kris has previously admitted to a rift with her brother since April 2018 but has not specified why, only stating that she was at fault. JB

Kris defends Noynoy Aquino: ‘Give the guy a break’