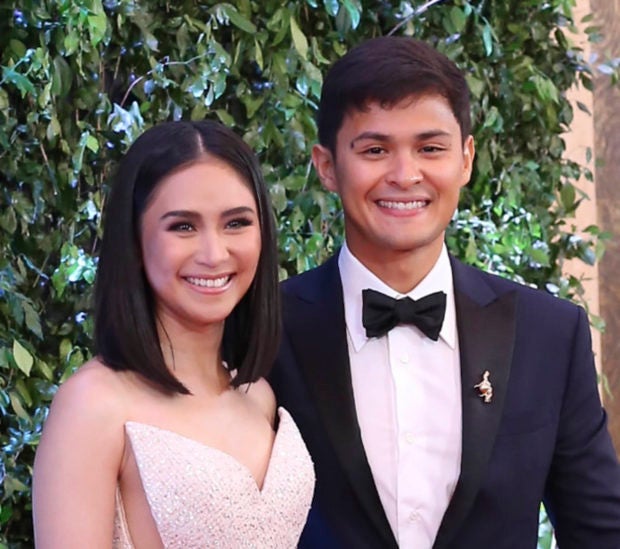 It may have appeared to be a scene from a Pinoy teleserye but longtime show biz sweethearts Sarah Geronimo and Matteo Guidicelli really tied the knot in a private ceremony at the posh Shangri-La at the Fort in Taguig City late on Thursday, with a brief fisticuff as an added production value.

As word poured out that the 31-year-old singer-actress finally married the 29-year-old Filipino-Italian celebrity after a seven-year relationship, netizens busied themselves early on Friday by posting on Twitter at least 200,000 tweets, mostly well wishes, with the hashtags #Sarah, #Matteo and #AshMatt (she’s Sarah Asher Geronimo off-screen).

A few remarks were posted with the hashtag #DivineIntervention (at least 1,600 tweets), referring to Sarah’s mother, Divine Geronimo.

Mommy Divine was apparently not told of her daughter’s civil wedding, and only learned of it through the column of a popular show biz journalist and had it confirmed by the Geronimo family bodyguard only moments before the ceremony got under way.

The mother rushed to Shangri-La at the Fort and, after the ceremony, asked to speak with Sarah. But Guidicelli was apparently angered that the Geronimo family bodyguard, identified as Jerry Tamara, revealed details of the ceremony and the actor punched him in the neck.

Tamara did not sustain any serious injury but he later showed up at a Taguig City police station before dawn to report the incident.

Taguig police chief Col. Celso Rodriguez said later on Friday that he could not reveal details because Tamara only asked the incident to be recorded in the police blotter and indicated that he did not want to press charges.

Rodriguez could only say that Tamara claimed to be the Geronimo family bodyguard and his employer, Mommy Divine, ordered him to “stalk Sarah” and he was only doing his job. The police chief also said that Tamara only filed the complaint to ensure “Guidicelli won’t twist what happened.”

But the differences between Mommy Divine and Guidicelli are well known to show biz industry watchers and insiders. One entertainment journalist downplayed the incident, saying: “Divine is always mad at everyone” but suggested “she’s mad because of monetary considerations.”

Others declined to comment on the incident, including Viva Entertainment, the company that manages the careers of both Sarah and Guidicelli.

But the couple’s friends and colleagues in show biz heaped praise and support for the newlyweds.

“My heart jumps for joy for these two newlyweds. No one deserves to be married than these two,” Martin Nievera told the Inquirer. “Love conquers all. All good things come to those who wait. The wait is over. Forever has just begun! Stay ‘twogether’!”

“Wow! God bless them both. I wish them a blessed union,” Ogie Alcasid told the Inquirer.

Ice Seguerra hoped to remind Sarah and Guidicelli that people are rooting for their relationship. “You deserve the life you choose, Sarah!” he said. “We’re all rooting for you and Matteo.”

Singer Ronnie Liang said it was “about time” Sarah and Guidicelli got married. “Congratulations and best wishes to them. I’m so happy upon hearing the news about their civil wedding,” he told the Inquirer. “They deserve to be happy, especially Sarah. She’s so hardworking and dedicated to her craft as an actor and performer. Now, it’s time for herself.”

Jed Madela described Sarah and Guidicelli as “two amazing people with the purest of hearts.” “They deserve nothing less. I wish more love and blessing in this new chapter in their lives,” he told the Inquirer. “AshMatt forever!”