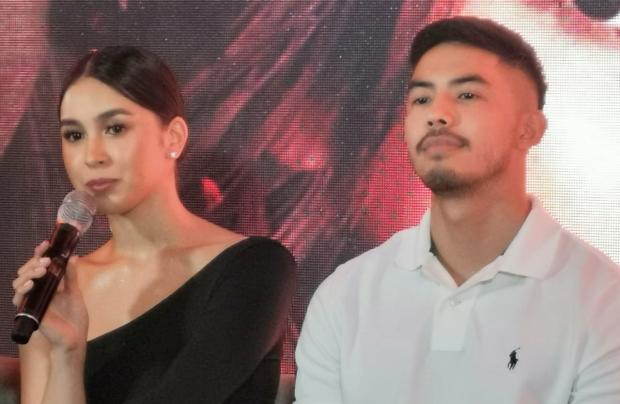 Julia Barretto and Tony Labrusca during the press conference of their iWant digital series “I Am U” on Wednesday, Feb. 19, 2020. (Photo by KATRINA HALLARE / INQUIRER.net)

MANILA, Philippines — Upon learning that she’ll be paired with Tony Labrusca for her next project, the first thing Julia Barretto thought of instantly were passionate kissing scenes he had in “Glorious.”

[When it was first pitched to me the name Tony Labrusca, I said “Oooh there are many kissing scenes?]

[Since he was from “Glorious,” I thought to myself “So there are a lot of those scenes? I heard of Tony first in “Glorious,” so for me, even before I met him, I already thought that that was his image, the sexy, hot and steamy.]

“Glorious” was the successful iWant movie of Labrusca opposite Angel Aquino, in which they portrayed a couple struggling to keep their May-December love affair.

Barretto, nonetheless, expressed that she enjoyed working with the actor while filming the psycho-thriller series.

The actress added that she also felt excited working with Labrusca, who she complimented as a “universal leading man.”

Labrusca, likewise, also expressed he was happy while working with Barretto, describing the experience as a “different dynamic.”

“For the first time, I got to work with someone na kasing-age ko (almost my same age),” the actor said.

“It was always like a different rapport and a different type of chemistry na I had with the other leading ladies, kasi (because) they knew so much more than I did, they’ve been in the industry so much longer,” he went on saying about the leading ladies he had been paired with before.

The actor added that he felt “refreshed” while working with his other castmates who were also within his age bracket.

“I Am U” tells the story of Rose (Barretto), who unexpectedly meets her doppelganger, Elise. Their story later takes a dark turn as Elise’s friends face their deaths one by one.

The mystery psycho-thriller, directed by Dwein Baltazar, will be available starting Feb. 26 on streaming app iWant.

TAGS: Glorious, I Am U, iWant, Julia Barretto, Tony Labrusca