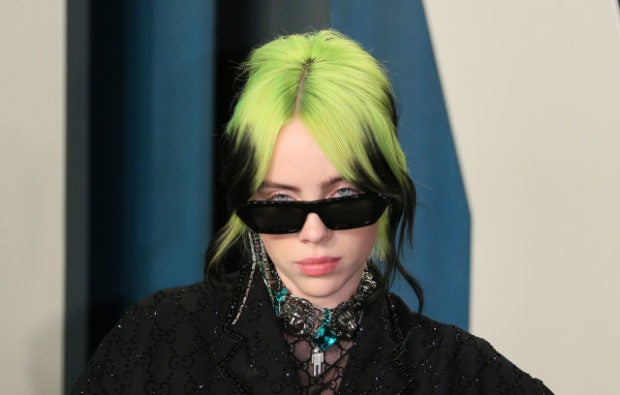 But the build-up to the show has been overshadowed by criticism of the lack of female nominees in mixed-gender categories, with just four women honored in 25 spots.

The disproportionately male shortlists, unveiled last month before the ceremony at London’s O2 Arena, were branded an “absolute disgrace” by one music critic.

It comes despite the Brits’ voting academy undergoing a major overhaul in 2017 to make it more gender-balanced and diverse, with hundreds of new members joining the nominating pool.

Veteran rocker Rod Stewart closed the ceremony, which recognizes the country’s top pop talent in 2019, while Stormzy and Harry Styles are among the male-heavy lineup that also performed.

But Eilish stole the show on women’s behalf.

Nominated for best international female solo artist, she performed the world premiere of the new James Bond theme tune, which shares the same name as the upcoming movie “No Time To Die”.

The teenage pop iconoclast unveiled the ballad — which features the grungy melancholic feel that has propelled her to star status — to critical acclaim last week.

It has already racked up nearly 26 million views on her YouTube channel, capping a remarkable few weeks for the 18-year-old singer who is the youngest artist to record a Bond track.

The breakout star swept last month’s Grammys, clinching five awards including the “big four” prizes: Album of the Year, Song of the Year, Record of the Year and Best New Artist.

The Brit Awards have recognized the cream of British pop music since they were first held in 1977, and have often been peppered with scandal and farce.

The British trio battled it out for the coveted best album award — alongside Styles and Michael Kiwanuka — as well as for male solo artist and song of the year.

Capaldi and Dave went head-to-head for new artist of the year, with singer Mabel — daughter of Swedish star Neneh Cherry — rapper Aitch and singer-songwriter Sam Fender the other contenders.

Glasgow-born Capaldi is riding high after his debut album, “Divinely Uninspired To A Hellish Extent”, became Britain’s best-selling album of 2019.

But the ceremony threatens to be remembered for gender diversity row.

Alongside Mabel, who was up for song of the year as well as best new artist, only United States singer and dancer Normani and compatriot Miley Cyrus were nominated for awards open to both male and female artists.

The latter two were only for vocal collaborations on songs by male artists Sam Smith and Mark Ronson, respectively.