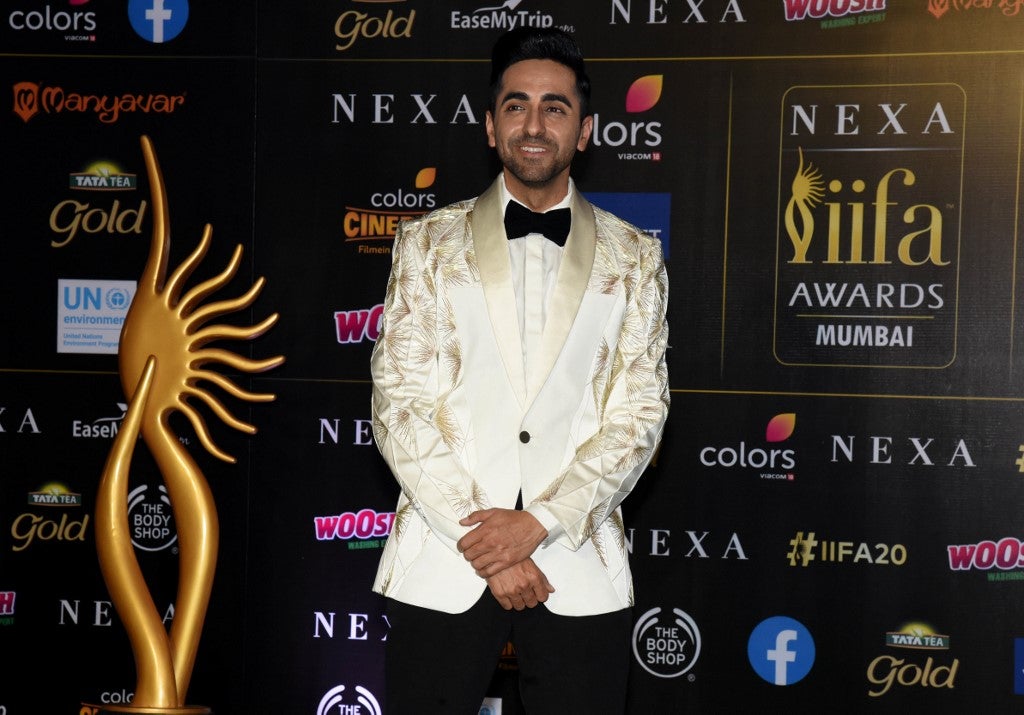 This file photo taken on September 18, 2019, shows Bollywood actor Ayushmann Khurrana arriving for the 20th International Indian Film Academy (IIFA) Awards at the NSCI Dome in Mumbai. The film “Shubh Mangal Zyada Saavdhan” (“Be Extra Careful About Marriage”) will be released on February 21, 2020, and stars popular actor Ayushmann Khurrana as a young man bucking social disapproval to be with his beloved — a time-tested Bollywood plotline, except the object of his affection is male. Photo by Sujit JAISWAL / AFP

Bombay, India — A foot-tapping sequin-doused disco number, a hot-pink wedding, and a kiss between the two male leads: Bollywood’s latest release, billed as India’s first gay rom-com, is making no bones about its subject matter.

Released on Friday, “Shubh Mangal Zyada Saavdhan” (“Be Extra Careful About Marriage”) stars popular actor Ayushmann Khurrana as a young man bucking social disapproval to be with his beloved – a time-tested Bollywood plotline, except the object of his affection is male.

India’s Supreme Court scrapped a colonial-era ban on homosexuality in 2018. But the LGBT community remains on the fringes of society – many face discrimination or even violence, including at the hands of their own families, and their stories are rarely celebrated in mainstream cinema.

A trailer for the film shows Khurrana sporting a rainbow cape and armed with a megaphone as he announces to anyone listening that his lover’s father suffers from “a disease with no cure”: homophobia.

The scene is played for laughs but unlike earlier Bollywood movies, the gay characters are not the butt of the joke.

The film’s writer and director Hitesh Kewalya told AFP he felt the controversial subject matter had to be treated “in such a way as to make it accessible, and humor seemed to be the natural choice to achieve that”.

The movie is a follow-up of sorts to 2017’s “Shubh Mangal Saavdhan” (“Beware of Marriage”) – a sleeper hit written by Kewalya that won Khurrana praise for his portrayal of a man dealing with erectile dysfunction.

It is not the only taboo tackled by the 35-year-old star during his career. He has played everything from a money-making sperm donor to a pianist pretending to be blind to a man dealing with premature balding.

The risks have paid off at the box office, prompting the Hindi film industry to pump more funds into movies featuring storylines that challenge traditional norms.

The co-producer of Khurrana’s latest film is T-Series, a Bollywood giant that started with recordings of Hindu devotional songs before hitting the big time with movie soundtracks and becoming the world’s top YouTube channel with 128 million subscribers.

Bhushan Kumar, T-Series’ chairman and managing director, told AFP the company had no hesitation in backing the project.

“When we heard the story, our first reaction was that it’s a perfect family entertainer that subtly speaks about the fact (that) love has no boundaries, no gender,” Kumar said.

“We have an interesting message – of societal acceptance – albeit (presented) in a much more fun manner so that it reaches more people and helps them re-evaluate their pre-conditioned thoughts,” he added.

Bollywood does not have a good track record when it comes to portraying the LGBT community. But a handful of films have dealt with the subject sensitively, such as “My Brother Nikhil”, “Kapoor and Sons”, and “Aligarh”.

Many have also faced the ire of extremists, such as “Fire”, a 1996 drama about two women in unhappy marriages who have a sexual relationship. When the film was released in India, Hindu hardliners attacked cinemas showing it.

It is hardly surprising then that as recently as last year, the producers of “Ek Ladki Ko Dekha Toh Aisa Laga” (“How I Felt When I Saw A Girl”), about a family accepting their lesbian daughter, kept the movie’s theme firmly under wraps until it hit the screen.

In contrast, the promotional trailers for “Shubh Mangal Zyada Saavdhan” feature Khurrana and Jitendra Kumar – who plays his boyfriend – sharing everything from a kiss to romantic scenes to flamboyant dance numbers.

In an interview with AFP last year, Khurrana said that “a subject like this needs a mainstream actor and a certain tonality to reach a larger population and hopefully start a conversation”.

“Humor is just an entry point to spotlighting an emotional and serious matter… Section 377 might have been read down but a cruel bias against homosexuality still exists,” he said, referring to the scrapped legislation.

“After the success of the last few years, I feel able to make courageous choices and choose radical cinema.”